Hold onto your hats. Or parasols. It’s getting warmer.

The land and sea temperatures are in for last month, and it was the hottest September in 135 years of record keeping by the National Oceanic and Atmospheric Administration. May, June, and August also set records.

That means 2014 has tied 1998 for the warmest first nine months on record — and it will likely surpass 2010 for warmest year on record. In fact, there’s been a lot of record breaking these last few years. The AP’s Seth Borenstein reports:

“This is one of many indicators that climate change has not stopped and that it continues to be one of the most important issues facing humanity,” said University of Illinois climate scientist Donald Wuebbles.

Some people, mostly non-scientists, have been claiming that the world has not warmed in 18 years, but “no one’s told the globe that,” [NOAA climate scientist Jessica] Blunden said. She said NOAA records show no pause in warming.

In North America, temperatures were all over the map in the first nine months of this year. In the contiguous U.S., it was only 0.2 degrees Fahrenheit over the 20th century average. The West, however, was much warmer; California was a record-breaking 4.1 degrees above average.

So if your neighbor, or uncle, or hairdresser, or senatorial candidate doubts that the world is warming — because, hey, it was cold in some states this year, it even snowed! — here’s a chart with the latest data you can direct him or her to: 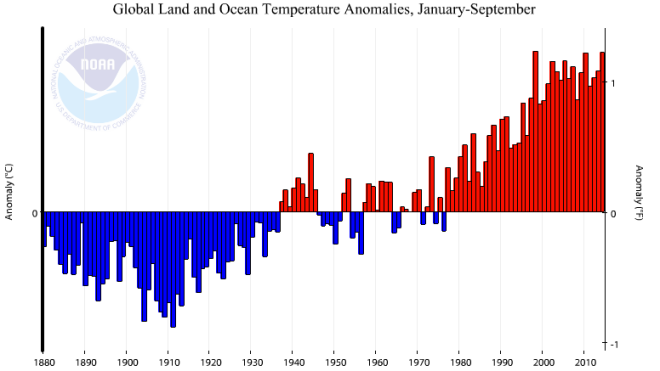 Temperature anomalies (or variations from average) for the first nine months of each of the last 135 years.
NOAA

Rooftop solar is just the beginning; utilities must innovate or go extinct