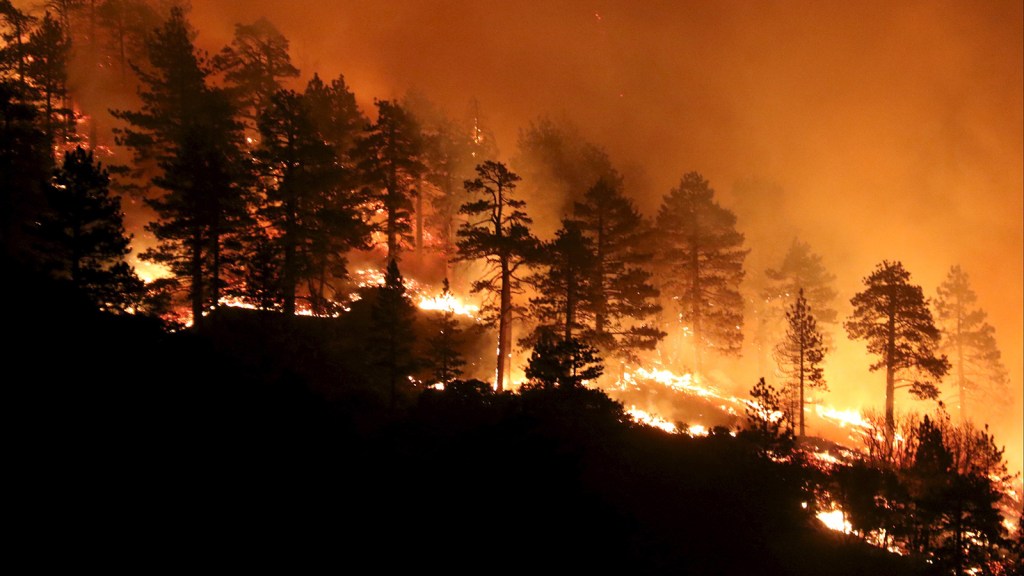 Here’s a kind of crazy stat: Between 30 and 40 percent of California’s forest firefighters are state prison inmates. The state has become a tinderbox of sorts from a four-year drought, and roughly 4,000 low-level felons are on the front lines of the state’s active fires. Here’s what’s going on:

Why are prisoners fighting fires? For years, California’s prison system has operated a number of “conservation camps,” in which low-level felons in the state prison system volunteer to do manual labor outside, like clearing brush to prevent forest fires or fighting the fires themselves. A handful of other states have similar programs, but California’s program is by far the largest, with roughly 4,000 participants. At its best, the program is a win-win situation: Inmates learn useful skills and spend time outside the normal confines of prison, and the collaboration with Cal Fire saves the state roughly $80 million a year.

Participants make $2 per day in the program and $2 an hour when they’re on a fire line. That may sound paltry, though it’s not bad by prison standards: Many prison jobs bring in less than $1 per hour. In addition, for each day they work in the program, the inmates receive a two-day reduction from their sentences.

So these are convicted felons? Yes — the prisoners are typically low-level felons, all of whom have volunteered to participate in the program and have demonstrated good behavior in prison. Some convictions exclude prisoners from applying, like arson (surprise, surprise) or sex crimes. One benefit of the program is that it often breaks down racial barriers: “When people are incarcerated they tend to segregate by race,” says Hadar Aviram, a law professor and criminologist at the University of California-Hastings. “The fire camps are not like that. People who do not associate with each other inside a prison are willing to be friends when they’re at a fire camp.”

As California reforms its prison system and more low-level offenders are sent home sooner, the state may have to entertain the idea of including more violent offenders in the firefighting ranks.

Are prisoners the ones flying the helicopters that drop flame retardant? Nope. Career firefighters do things like flying in helicopters and driving bulldozers; inmate firefighters use hand tools, like chainsaws, axes, and rakes, to contain the fire by clearing out the vegetation around it. The prisoners participate in a four-week training process — the same process that other state firefighters go through — proving that they’re fit enough to work through brush in the heat of a fire while carrying up to 100 pounds of gear. They work in teams of about 15 people, supervised by a fire captain. When there’s a big fire blazing, the teams work in shifts of 24 hours, followed by a 24-hour break. When not tending fires, the inmates do other conservation work, often clearing brush to prevent future fires.

There are no prison guards out on the front lines with the firefighters, but Daniel Berlant, a spokesperson for Cal Fire, says escape attempts are exceedingly rare. “This is a reward for many of these individuals,” he says. “They’re outside the walls, doing good work, learning a skill that they may not get behind bars. They don’t want to screw up.”

How dangerous is the work? Teams are often working on the edge of fires with flames over 100 feet high; falling branches and other debris pose the most immediate risk. “You can’t deny how dangerous this work is,” says Bill Sessa, a spokesperson for the state’s Department of Corrections and Rehabilitation. But Sessa says there have been only “two or three” serious injuries and no deaths among inmate firefighters over the past two years.

Where do they sleep? The inmates stay in one of 44 “fire camps,” barracks-style sleeping quarters sprinkled across the state, often in the middle of the forest. The camps are guarded by prison staff but have a very different feel from typical state prisons; they’re sometimes surrounded by just a chain-link fence, and the prisoners eat better (and more) food since they’re burning so many calories.

Sounds great. Any problems with the program? Prison reform advocates have raised concerns that the state is so reliant on the cheap labor of inmate firefighters that policymakers may be slow to adopt prison reforms as a result. The concern was magnified last fall, when lawyers for state Attorney General Kamala Harris argued that extending an early prison-release program to “all minimum custody inmates at this time would severely impact fire camp participation — a dangerous outcome while California is in the middle of a difficult fire season and severe drought.” Harris has since said she was “troubled” by the argument, and the state has ruled that minimum custody inmates, including firefighters, are eligible for the program so long as it proves not to deplete the numbers of inmate firefighters.