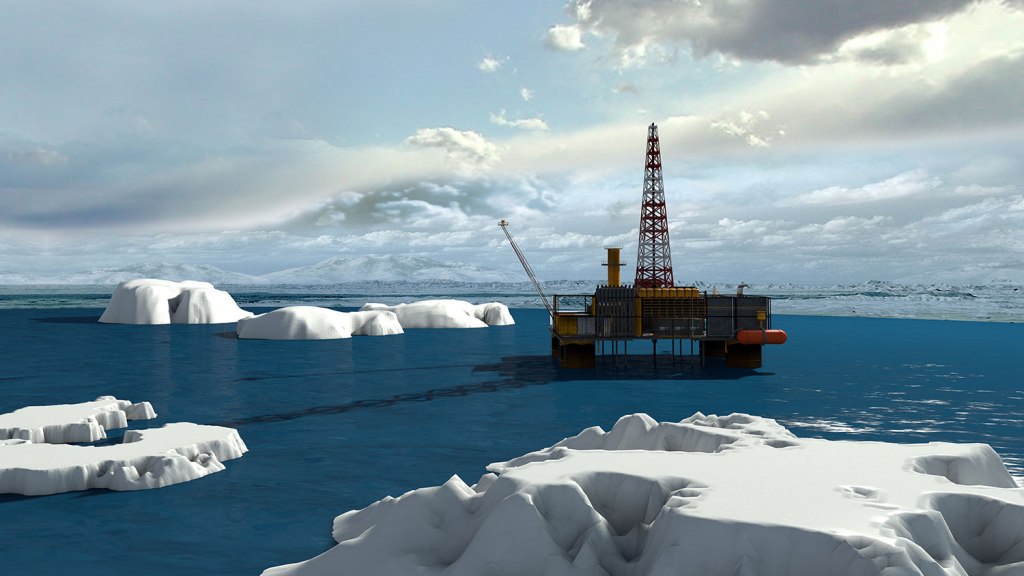 Even as Shell is talking a good talk about climate change, it is pushing ahead with plans to drill in the Alaskan Arctic as early as this summer. The company suspended operations there in 2012 after a series of minor disasters. Its contractor was hit with eight felony counts and fined $12 million late last year.

But now Shell is moving forward again, with what looks like a newly reaffirmed go-ahead from the Department of the Interior (DOI). One clear sign of its intent: The company has leased a port on the Seattle waterfront where it can base its Arctic operations.

On Thursday, the DOI released a revised environmental impact statement for drilling in the Chukchi Sea — which Shell won the rights to do in 2008. The report found that there’s a 75 percent likelihood that the operations will result in one or more large spills — that means more than 1,000 barrels — during the 77-year lease. The report also forecast 750 smaller spills.

But despite the new environmental impact statement, and the strong likelihood of a spill, the department will likely allow drilling operations to move forward following a public comment period. The environmental groups that brought the suit don’t see this as a victory.

“There is no such thing as safe or responsible drilling in the Arctic Ocean,” said Marissa Knodel, a climate campaigner with Friends of the Earth. “Shell’s record of recklessness and the federal government’s own environmental analysis show that approval of Lease Sale 193 would be unsafe, dangerous and irresponsible.”

Greenpeace’s John Deans said the decision “will drastically undermine [Obama’s] recent proposals to protect parts of the Arctic, including the Alaska Wildlife Refuge, from oil drilling.”

Shell’s plans come, ironically, as the company is saying it will now engage seriously on climate, and is pushing other oil companies to do the same. Its recent decision to work with activist shareholders who are demanding that climate change factor into management decisions appears to be a first step in that direction.

“I’m well aware that the industry’s credibility is an issue,” said Shell CEO Ben van Beurden in a speech on Thursday. “Stereotypes that fail to see the benefits our industry brings to the world are short-sighted. But we must also take a critical look at ourselves.”

At the moment, however, it doesn’t look like the company’s plans to salvage its climate-related “credibility” extend to cancelling its designs on the Chukchi Sea — one of its more dangerous operations, and one that inspires quite a bit of ire in its critics.

Besides the danger that drilling poses to Arctic environments, there’s the contribution it would make to climate change. A recent study found that if the world hopes to avoid 2 degrees Celsius or more of global warming, 80 percent of the world’s untouched fossil fuel reserves would have to stay in the ground — including all of the oil left in the thawing Arctic.

But people who believe that will happen, van Beurden says, aren’t clued in to reality. “For a sustainable energy future, we need a more balanced debate,” he said. “‘Fossil fuels out, renewables in’ — too often, that’s what it boils down to. Yet in my view, that’s simply naive.”

If policymakers agree with that line of thinking, we’ll be in for some catastrophic warming.

*Correction, 2/17/15: This post initially said that DOI forecast 260 small spills would happen during drilling in the Chukchi Sea. In fact, the DOI’s report forecasts 750 such spills.