Pretty much everyone who acknowledges the problem of climate change is hungry for good news about it, which makes sense, as most of the news is overwhelming and awful. There is high demand for optimism — I hear it every time someone asks me to write or speak on climate — so inevitably there is supply.

Take, for instance, Paul Krugman, who crows, in a column called “Salvation Gets Cheap,” that “even under the most ambitious goals the [IPCC] assessment considers, the estimated reduction in economic growth would basically amount to a rounding error, around 0.06 percent per year.” Joe Romm touts the same number in “Climate Panel Stunner: Avoiding Climate Catastrophe Is Super Cheap — But Only If We Act Now.”

I appreciate the can-do spirit, but as Krugman and Romm no doubt both know, the idea that aggressive climate mitigation is going to shave precisely 0.06 percent off GDP growth is utterly fantastical.

For one thing, as I’ve said before, the economic models from which IPCC and others draw these numbers are just this side of wild guesses, based on assumptions about economic growth, resource prices, and technological development decades in the future.

But you don’t have to accept my skepticism about models to find these numbers fishy. Even if you take the IPCC’s number at face value, it is meant as the low bound of possible costs — meaning it assumes rapid, large-scale, steady, rational progress toward energy transition. It assumes that mitigation efforts will play out like an economist’s spreadsheet.

In the real world, however, special interests have power, built infrastructure carries enormous inertia, and policy is rarely rational. There are market failures, political distortions, and unforeseen events. Life is no spreadsheet.

The fact is, models like those used by the IPCC are not meant to tell us anything at all about the feasibility of energy transitions in the real world. They are just projections, proofs of what is technically possible.

And that’s great. But we also need to think about feasibility. And we need metrics through which to assess it. That brings me to a paper I’ve been meaning to get to for a while: “A critical review of global decarbonization scenarios: what do they tell us about feasibility?” (It came to me via Jesse Jenkins, who used to work at the Breakthrough Institute and now is out at MIT getting into all sorts of interesting stuff, including being a co-author on this paper.)

It’s a great project: The researchers pulled together 11 studies on global decarbonization, all of which describe scenarios for “50 to 90 percent reductions in global CO2 emissions by mid-century.” They drew from four different types of studies. I won’t burden you with descriptions of the types (you’re welcome), but suffice to say they include both top-down and bottom-up modeling and a variety of approaches to efficiency, rates of deployment, and other issues. You can see descriptions of each in the paper.

Using those 11 studies as their dataset, they look at a couple of key metrics that get at feasibility: At what rate does energy intensity (the energy used to produce a unit of GDP) decline in the scenarios? And at what rate are various technologies deployed? “This kind of benchmarking can (and should) both guide the scenario building community in constructing and testing actionable decarbonization strategies,” they write, “and help policy makers interpret the results of such studies.”

The results on energy intensity may be the most interesting. It turns out every one of these scenarios — pretty much any scenario you can imagine that leads to rapid decarbonization — envisions “historically unprecedented improvements in the energy intensity of the global economy.”

This chart shows how the scenarios project the rate of total global energy demand slowing or even reversing, even as economies continue to grow: 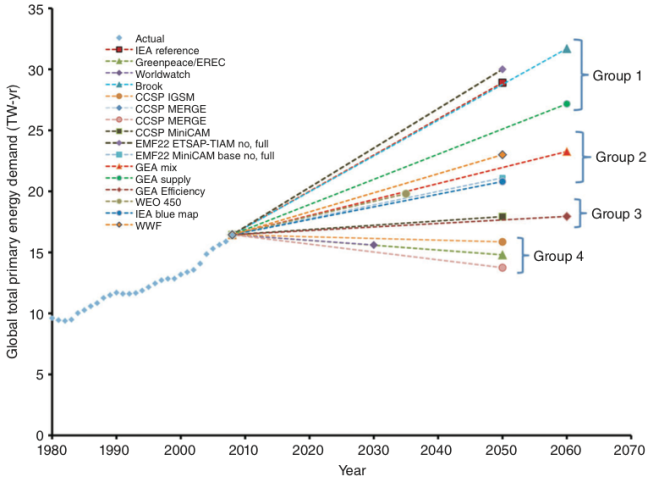 The authors point out:

Many studies assume reductions in [total primary energy demand] in the range of 30–40% relative to [business-as-usual] scenarios, thereby requiring much greater annual rates of improvement in energy intensity than have been experienced in the last 40 years. [my emphasis]

Here’s a way of envisioning that: 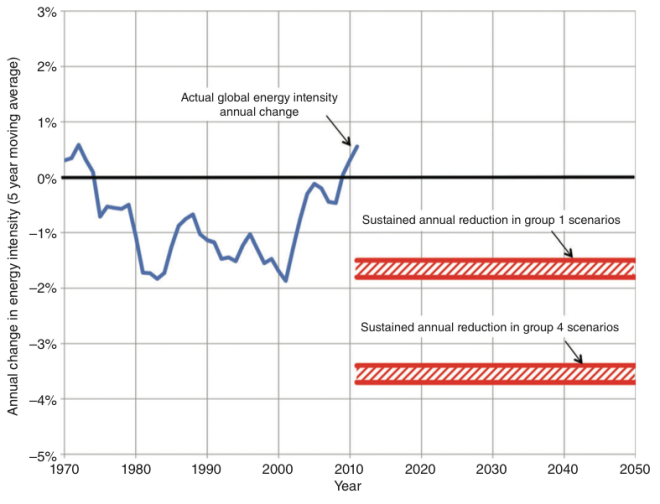 The blue line shows the actual trend in global energy-intensity growth. As you can see, energy intensity began declining year-on-year in the ’70s and kept declining, at varying rates, for decades. Then the line jacks up around 2000, right about when China went on its coal frenzy.

The red bars on the right are where that blue line would have to get, and stay for the rest of the century, to achieve decarbonization. The Group 4 scenarios (the lower red bar) are mostly the scenarios that show global energy demand being satisfied entirely with renewables, without nuclear or CCS. If you’re going to go 100 percent renewables, you need a lot of efficiency — more than has ever been deployed, faster, globally, and sustained for decades.

The results on deployment are also revealing. What the researchers found is that the rate of capacity additions — building of new power plants, etc. — implied by the bulk of the studies is within the normal historical range. But the capacity additions required to get to the 100-percent-renewables scenarios are mind-boggling: 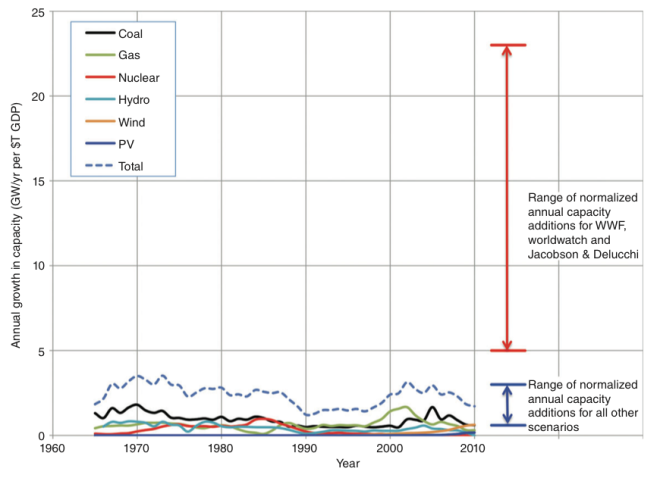 Three scenarios (Worldwatch, Jacobson & Delucchi, and WWF) that call for large percentages of wind and solar power and exclude key baseload technologies [e.g., nuclear and/or coal and gas with carbon capture and storage (CCS)] … envision a 4- to 10-fold increase in world generating capacity, calling for 20,000-30,000 GW by 2030 and over 50,000 GW by 2050, a build-out approximately an order of magnitude greater than the remainder of the studies. These studies also envision a normalized build-out of generating capacity in the range of 5-23 GW/year/$T of GDP, or 1.4-15 times faster than historical experience. These unprecedented rates are a consequence of both the relatively low-capacity factors of wind and solar as well as increased demand due to the assumed widespread electrification of the economy. [my emphasis]

In short, if we want a 100 percent renewables world, with no coal, gas, or nuclear, we’ll need to build more power generation capacity, faster, than at any time in history.

These two findings — the extraordinary levels of energy-intensity improvement and technology deployment required to decarbonize with renewables only — lead the authors to sound a note of caution:

Given the multiplicity of feasibility challenges associated with simultaneously achieving such rapid rates of energy intensity improvement and low-carbon capacity deployment, it is likely to be both premature and dangerously risky to “bet the planet” on a narrow portfolio of favored low-carbon energy technologies.

I might quibble with this a bit. I don’t think there’s any problem showing that 100 percent renewables is possible or in aspiring to maximize the percentage of renewbles in the final mix. We should hedge our bets, sure, but we should also aim high.

But the last conclusion is the most significant, at it bears on all the scenarios:

… these studies tend to only superficially address the key technical, economic, infrastructural, and societal factors that may constrain a rapid energy system transition or how such constraints can be plausibly overcome. We recognize that detailed treatment of these factors is beyond the scope and purpose of many of these studies, which are intended to address at a relatively high-level the scope and pace of energy system transformation required under different assumptions or to suggest the portfolio of technologies necessary to decarbonize the energy sector. However, this point may be lost on lay audiences and the media through which these studies are reported. To be reliable guides for policymaking, these types of scenarios clearly need to be supplemented by more detailed analyses addressing the key constraints on energy system transformation, including technological readiness, economic costs, infrastructure and operational issues, and societal acceptability with respect to each of the relevant technology pathways. [my emphasis]

Long story short, most decarbonization scenarios are thought experiments, not practical roadmaps. But when they are reported to the public, that distinction is often lost.

More to the point, we are past the time when thought experiments are enough. We need to start thinking in practical terms about how to get the technologies we need ready — as the authors say, “deep energy system decarbonization is likely to require an ambitious, focused agenda of rapid innovation and improvement in every critical technology area, even those commercially available today, as well as substantial ‘demand pull’ efforts and policies to ensure early demonstration, industry maturation, scale-up, and ‘learning by doing.'”

We need to think about the costs and who is going to pay them; even if the benefits outweigh the costs, the costs are going to be enormous. We need to think about the systemic changes required to integrate a large amount of variable renewables into an infrastructure that wasn’t designed for it. And most of all, we need serious, realistic thinking about the social and political buy-in necessary to drive wholesale energy transformation. In the fallen world we live in, such social and political barriers are likely to be more difficult to overcome than technology or modeling challenges.

It’s great to have these studies in our back pocket, as they refute the conservative mantra that a clean-energy transition is impossible. It is possible. But possible is a long way from practical or likely, and farther yet from “cheap” or “easy.” Let’s not fool ourselves about the huge task ahead.

Al Gore is still kicking butt as a climate warrior