On March 20, a total solar eclipse will pass over the Atlantic Ocean, northern Africa, Europe, and much of northern Asia.

Though partial eclipses are fairly common, this one will be a doozy — the biggest, most total eclipse of the sun in Europe since 1999, expected to block from 90 to 95 percent of sunlight in some areas, including jolly old London. 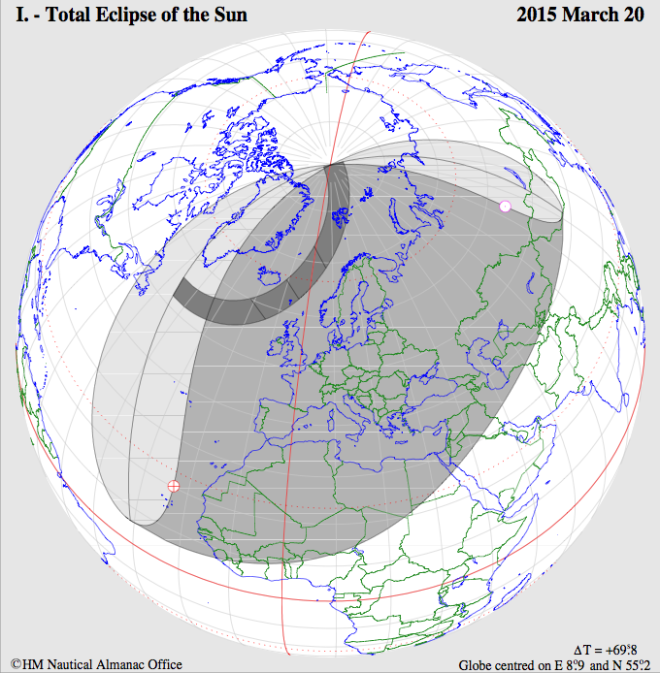 Among other changes in Europe in the last 16 years, the amount of installed solar PV power has gone from almost nothing to over 90 gigawatts.

What’s going to happen to the power grid when a big chunk of solar power is quickly removed and just as quickly returned?

Have no fear: The European Network of Transmission System Operators for Electricity — entsoe if you’re nasty — is on it. The organization released a Solar Eclipse 2015 Impact Analysis just last week. (Hat tip to Nigel Morris.) It frames the problem succinctly:

In 2015 the installed capacity on PV in the synchronous region of Continental Europe is expected to reach 90 GW and the eclipse may potentially cause a reduction of the PV infeed by more than 30 GW during clear sky conditions. This situation will pose a serious challenge to the regulating capability of the interconnected power system … [my emphasis]

Here’s the overall anticipated impact on the European power system: 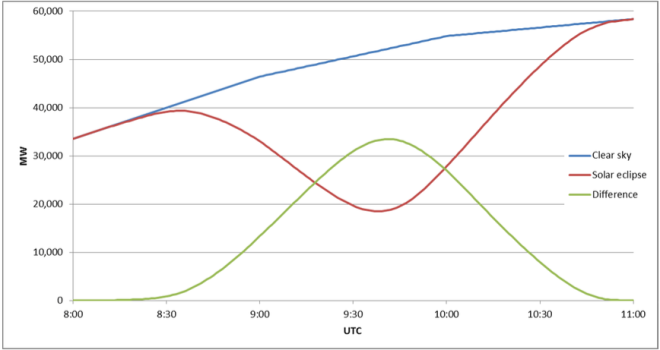 So there will be about an hour and a half of serious reduction in solar PV power. Around 50 percent of the lost power will come from Germany, 21 percent from Italy.

The rate at which grid solar energy will decrease and increase is quite high, as this graph shows: 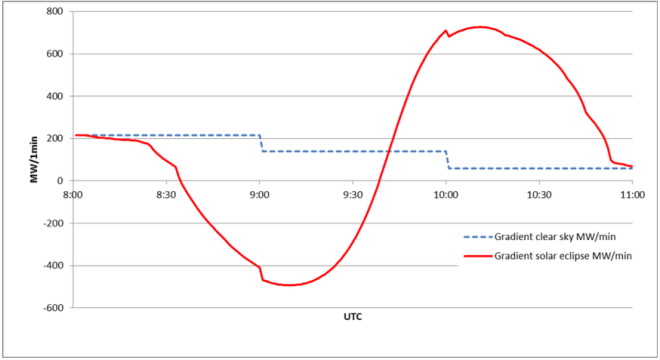 Another fun twist on all this is that solar eclipses have effects on power demand as well:

Based on evidence from the 1999 eclipse, we expect a depression in demand around the time of maximum obscuration from human causes — people stopping work and going to look at the phenomenon … We refer to this as the human-demand effect. This should depress demand before maximum eclipse — negative rate of change — and increase demand after — positive rate of change.

These rates of change work in the opposite direction to the PV changes. From 1999 evidence we expect the demand effect to dominate the PV effect.

So European grid regulators will have to manage these contradictory effects in real time.

Entsoe offers a list of recommendations, involving weather and demand forecasts and regulatory coordination across regions, but overall it seems confident that the European grid can ride the eclipse out fairly smoothly. Solar is still at a scale where its temporary loss can be managed.

It makes you wonder, though, how the European grid might handle the next total eclipse, expected in 2026. By then, solar power could be up to hundreds, even thousands of installed GW. What happens when an eclipse knocks out not just 30 but 50 or 100 or 1,000 GW? What happens if it knocks out 75 percent of some country’s power for an hour? You’d need a lot of backup to cover for that — from storage, wind, biomass, geothermal, or, if the grid is up for it, power brought in from regions outside the eclipse.

But then, what if you’re an island, like Hawaii, with no regional grid connections, no one else to help you out? Looks like a partial solar eclipse is heading there on March 8. Given all the solar installed lately in that state, is it going to be a problem?

I confess I’d never thought about it until I saw this analysis. Great. One more thing to worry about.