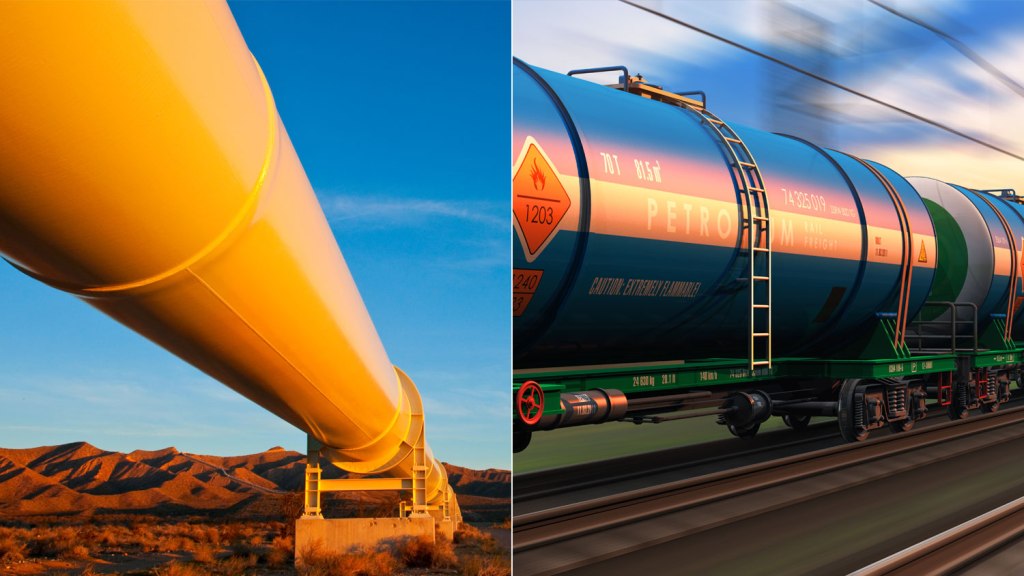 In the last few years, the grassroots environmental movement has energetically opposed constructing big new oil pipelines in North America. Their opposition is understandable, since, on a global level, fossil fuel infrastructure encourages fossil fuel consumption, contributing to climate change, and, on a local level, oil pipelines leak and explode. But conservatives have been delighted to argue that greens are endangering the public and being short-sighted. Oil that comes out of the ground has to get to market somehow, and currently a huge amount of it is being shipped on freight trains. The result? An epidemic of oil train derailments, causing spills and even deadly explosions.

Is it fair to blame activists for this? Should climate hawks throw in the towel and accept Keystone XL as the lesser evil?

No and no — and I’ll explain two key reasons why.

First: Much of the oil criss-crossing the U.S. on trains is coming from North Dakota and traveling out along east/west routes where there aren’t even any proposals for big new pipelines. You can’t blame activists for that. Keystone would connect the Alberta tar sands to refineries on the Gulf Coast, but wouldn’t do anything to help move North Dakota’s fracked bounty. Right now rail is the main option for that. “Keystone XL would enable tar-sands expansion projects, but is unlikely to reduce crude-by-rail,” says Anthony Swift, an attorney at the Natural Resources Defense Council. But don’t just take his word for it. Oil-loving, Keystone-supporting North Dakota Sen. Heidi Heitkamp (D) makes the same point: “I am not someone who has ever said that the Keystone pipeline will take crude off the rails. It won’t,” Heitkamp said in November. “Our markets are east and west and it would be extraordinarily difficult to build pipelines east and west.”

Second: Climate activists are supporting something that actually would go a long way toward solving the problem of dangerous oil trains: strict regulation of those trains.

In the long term, of course, climate hawks want to keep the oil in the soil, and they are pushing for structural changes — like an end to federal leases for oil drilling offshore and on federal land — that would reduce the amount of oil we produce in the U.S. But in the short term, they’re not just being unrealistic and saying “no” to all oil transport — they’re pushing to make that transport safer.

The Department of Transportation has the authority to impose rules on oil trains’ design and speed, which would reduce the risk of them leaking and exploding when they derail or crash. DOT made an initial proposal in July of last year and is expected to finalize it in May. Green groups have been disappointed by the proposal, though — both the weakness of the rules and the slowness of the timetable. If all goes according to plan, the rules would be implemented later this year, but their requirements would still take years to phase in.

Fortunately there’s now a stronger proposal that climate hawks can get behind: a new Senate bill that would impose stiffer requirements than those being proposed by the Obama administration. Sen. Maria Cantwell (D-Wash.) introduced the Crude-By-Rail Safety Act late last month, along with three Democratic cosponsors: Tammy Baldwin (Wis.), Patty Murray (Wash.), and Dianne Feinstein (Calif.). It got immediate backing from big green groups.

Here are four critical things that need to be done to make oil trains safer, three of which are included in Cantwell’s bill:

1) Stop the transport of oil in an old model of rail car, called the DOT-111, that was designed back in the ‘60s. DOT-111s “have a number of manufacturing defects that make them much more likely to rupture in a derailment,” says Swift. So environmentalists want to get 111s off the rails immediately. That’s exactly what Cantwell’s Senate bill would do. DOT, in contrast, proposes to delay that transition. “DOT only slowly phases out 111s by 2017 and the rest of fleet by 2020, and we think the industry is pushing to move the phaseout to 2025,” says Devorah Ancel, an attorney at the Sierra Club. “It’s very concerning.”

2) Require steel jackets around vulnerable rail cars that carry oil. DOT would require freight companies to transition to a newer, sturdier model of car called the CPC-1232, but even those cars aren’t sturdy enough — they have already been involved some fiery accidents, including one in West Virginia in February and one in Illinois in March. Cantwell’s bill would go further, requiring CPC-1232s to be jacketed, and then calling for “new tank car design standards that include 9/16th inch shells, thermal protection, pressure relief valves and electronically-controlled pneumatic brakes.”

3) Clamp down on the amount of flammable gases permitted in the oil on train cars. Oil fracked in North Dakota’s Bakken shale carries more volatile gases with it than your average crude, making explosions more common. DOT’s proposed rules do nothing to curb that. Cantwell et al would limit the volatility of the oil being transported and increase fines for violations.

4) Reduce train speeds. Currently, the speed limit for crude-by-rail is 50 mph, and that’s voluntary. DOT would make a speed limit mandatory, but would only lower it to 40 mph, and even that may only apply in “high threat urban areas” with more than 100,000 people. “The question of speed limits is crucial,” says Swift. “You need to dramatically reduce the speed at which these trains are moving.” Swift notes that CPC-1232s may puncture when going above 18 mph, but environmental groups stop short of explicitly calling for that speed limit. NRDC says, “Crude oil unit trains must adhere to speed limits that significantly reduce the possibility of an explosion in the event of a derailment.” That would presumably fall somewhere between 18 mph and 40 mph. Stricter speed limits is the one major needed reform that the Senate bill doesn’t address.

Cantwell’s bill also doesn’t compensate communities when accidents happen (the DOT proposal doesn’t either). But the bill’s sponsors intend to introduce future legislation to establish an oil spill liability trust fund paid for by fees from the companies moving crude oil. “Taxpayers should not be on the hook to bail out communities after a disaster caused by private companies,” said Cantwell.

It’s hard to imagine this bill passing both houses of an intensely pro-business, pro–fossil fuel Republican Congress. But Senate Democrats hope that by raising the issue they can build public awareness and support for stronger rules.

The bill could put pressure on the Obama administration to adopt the strongest possible version of its proposal. During the public comment period on DOT’s draft rules, the oil and rail industries argued for the weakest rules under consideration. Now the plans are being reviewed by the White House Office of Management and Budget, which tends to scale rules back in order to reduce their cost to business. Representatives from the oil and rail industries have been meeting with OMB to lobby for weaker rules.

Late last month, Chuck Schumer (N.Y.), who will take over as Senate Democratic leader after Harry Reid (Nev.) retires next year, announced that he and six colleagues — including Baldwin and Democratic Whip Dick Durbin (Ill.) — had sent a letter to OMB Director Shaun Donovan asking him to ensure “the rule is strong and comprehensive and that it is finalized as quickly as possible.” If nothing else, Schumer’s push and Cantwell’s bill will set up a countervailing force to the industry voices that the Obama administration is listening to.

The administration should protect public safety without being pushed by fellow Democrats — in this case, it has the power to do so without congressional approval. There is definitely a clear alternative to the false choice between pipelines and dangerous oil trains.