The Obama admin is finally going to green up its fossil fuel leasing, but how much? 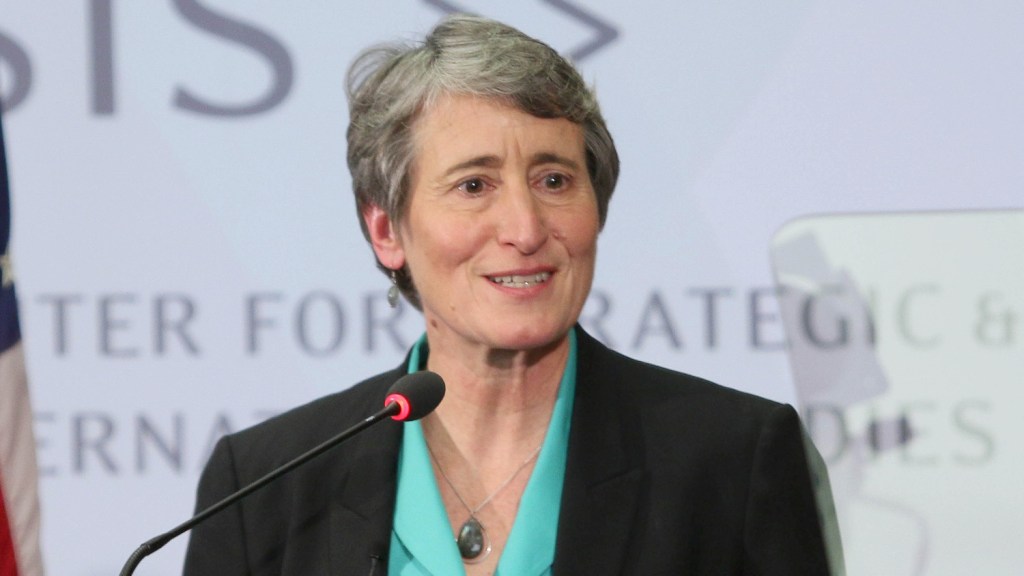 The Obama admin is finally going to green up its fossil fuel leasing, but how much?

Interior Secretary Sally Jewell promised in a speech on Tuesday that her department, after years of handing out fossil fuel leases at bargain basement prices, would embark on a green reform agenda. Climate activists made encouraging noises after the speech, but it’s not clear how encouraged they actually should be.

The Department of Interior (DOI) has completely ignored the climate impact of its programs like selling leases to mine for coal or drill for oil on federal land. Now, Jewell says, DOI will start considering mitigating climate change in its management of federal lands:

As the person entrusted with America’s biggest land management portfolio, I’ve … got to ask questions like: What are we doing to achieve a low-carbon future? Are we striking the right balance between conservation and development? What measures do we need in place for our land, water, and climate today to protect the families of tomorrow?

These are, indeed, questions the interior secretary should ask herself. They should have been asked, though, by her predecessor, Ken Salazar, upon his appointment in 2009. They should have been asked by Jewell upon her confirmation two years ago. It’s already more than six years into the administration of a president who has promised to tackle climate change. During those six years, DOI — often at the White House’s behest — has been selling off record amounts of oil and gas to be drilled from federal lands and waters by private companies.

It has also sold coal leases for an average price of $1.03 per ton of coal — way below the market price of coal, which currently ranges from $11.55 to $61.15 per ton. It’s also far below the government’s own cost estimate for the environmental damage caused by burning the coal; the social cost of the carbon pollution from a ton of coal is $22 to $237, according to the Obama administration’s figures. Two environmental groups, finally fed up with DOI charging vastly less than it should for coal leases, filed suit in December to force the issue.

Jewell didn’t say on Tuesday how the pricing system for coal leases would be reformed, nor how other parts of the program would be changed, nor when — just that reform is on the agenda.

She was slightly more specific about forthcoming rules intended to protect local air and water from contamination by drilling and mining:

In the coming days, we will release a final rule related to hydraulic fracturing — or fracking — on public lands. The rule will include measures to protect our nation’s groundwater — requiring operators to construct sound wells, to disclose the chemicals they use, and to safely recover and handle fluids used in the process.

In the coming months, we will also propose standards to cut methane emissions and wasted gas that result from venting and flaring during oil and gas operations. …

And further addressing the impacts of energy development, we’re moving forward with a proposal to modernize the way coal mining operations protect community water sources, and make sure companies restore streams and forests to a healthy condition. …

And in the Arctic, we just released a proposal to make sure that any oil and gas exploration offshore Alaska is subject to strong standards specifically tailored to the region’s challenging and unforgiving conditions.

That’s all less impressive than it sounds. Take the rules for fracking on public lands. Drafts of the rules have been released over the past couple of years, and the Natural Resources Defense Council notes that the “administration has progressively weakened” them, leaving them “woefully inadequate to protect public health, drinking water, or the environment.” It’s unclear whether the long-overdue final rules will be an improvement over the drafts, but Jewell herself has given greens reason to be pessimistic. As NRDC wrote in a recent blog post, “We’re concerned because Secretary Jewell recently said the new rules will be ‘minimal’ — and even acknowledged they will be weaker than some states.” [UPDATE: The fracking rules have now been released, and they are indeed disappointing.]

The administration’s recent Arctic drilling proposal was a big disappointment too — precisely because it allows Arctic drilling. “There’s no such thing as safe and responsible drilling, especially in the Arctic, so you can’t make that OK through some new rulemaking,” says Marissa Knodel, climate change campaigner at Friends of the Earth.

And when it comes to reforming the coal leasing program, environmentalists are unlikely to get what they really want: an immediate moratorium on all coal leasing. Some groups would settle for a much higher price that reflects the social cost of carbon, which would make it uneconomical for companies to mine coal on federal land. What’s more likely, though, is incremental price increases that let some mining continue.

But Jewell’s speech, despite its vagueness and many rhetorical and substantive concessions to fossil fuel companies, was praised by leading environmental organizations across the spectrum.

“Today’s speech from Secretary Jewell provides a critical signal that our leaders are getting serious about federal coal lease reform,” said Athan Manuel, director of the Sierra Club’s land protection program, in a statement. “Importantly, Secretary Jewell acknowledges that the coal program is inconsistent with President Obama’s climate objectives and that in order to protect our children’s health, we must keep dirty fuels in the ground and reform the outdated program.” This may sound overly enthusiastic, but even leftier Greenpeace sounded a positive, if slightly less effusive, note. “We welcome Secretary Jewell’s call for an open conversation about the federal coal program and how it can be managed in a way that is consistent with our climate change objectives,” said Greenpeace coal campaigner Diana Best in her group’s statement.

Environmentalists’ praise seems to be in reaction to a few key lines Jewell said about coal:

I think most Americans would be surprised to know that coal companies can make a winning bid for about a dollar a ton to mine taxpayer-owned coal.

Coal is going to continue to be an important part of our nation’s energy mix in the future. But the Government Accountability Office, our Inspector General, and Members of Congress from both sides of the aisle agree that the federal coal program needs reform.

We need to ask ourselves: Are taxpayers and local communities getting a fair return from these resources? How can we make the program more transparent and more competitive? How do we manage the program in a way that is consistent with our climate change objectives? These are hard questions. But it’s time for an honest and open conversation about modernizing the federal coal program.

Again, Jewell is offering more questions than answers — but activists are relieved that the questions are at least finally being asked.

Manuel of the Sierra Club notes that Jewell also said, “Helping our nation cut carbon pollution should inform our decisions about where we develop, how we develop, and what we develop.” Sierra Club hopes that will mean DOI limits the total amount of coal leasing. “Ultimately you’ll see less coal leased,” Manuel predicts. “They probably would declare some areas off-limits because it’s just irresponsible to put some areas on the market.”

“I think the reason there’s been mostly positive reaction is it’s the first time she’s acknowledged the incompatibility [of coal leasing] with the president’s climate ambitions,” says Greenpeace spokesman Joe Smyth. “If it just turns out to be minor changes to royalty rates, that’s not reform, it’s just window dressing.”

On Thursday, after Obama directed federal agencies to reduce carbon emissions through efficiency and clean energy, Greenpeace took the opportunity to point out the big, obvious way the federal government could slash emissions even more: “his administration needs to get serious about the federal government’s much bigger carbon problem — fueling the climate crisis by giving away our coal, oil, and gas from federal lands and waters,” said Greenpeace climate and energy campaign director Kelly Mitchell. “President Obama and Interior Secretary Jewell can take immediate steps that would have a real impact: rejecting Shell’s plans to drill for oil in the Arctic and putting a moratorium on the sale of federal coal.”

They’re not the only ones with advice for Obama and Jewell. Also on Thursday, the Center for American Progress and the Wilderness Society issued a report saying that the federal fossil fuel leasing programs threaten to undermine Obama’s climate progress altogether. “The U.S. Department of the Interior, which has jurisdiction over the nation’s public lands, has no comprehensive plan to measure, monitor and reduce the total volume of greenhouse gas emissions that result from the leasing and development of federal energy resources,” the report notes.

Optimists see Jewell’s Tuesday speech as a sign that the Obama administration is finally moving in the right direction. “We know we won’t get [a full ban on coal leasing] in one big swing,” says Manuel. “It’s going to take a sustained rally to do this.”