Everyone knows the caricature of New York liberals: out-of-touch fashion designers and media executives in Manhattan. Think of Vogue Editor Anna Wintour hosting high-dollar Democratic fundraisers at her Greenwich Village townhouse. But it was voters outside of New York City who recently came out in droves for the more progressive candidate in the Democratic gubernatorial primary. The reason? Fracking.

Gov. Andrew Cuomo was expected to sail through the primary in September. We in the New York media assumed that his progressive challenger in the race, Fordham law professor Zephyr Teachout, would be lucky to break 20 percent, and that her support would come heavily from New York City and its suburbs. Upstate, a largely rural and relatively conservative area, seldom backs the more progressive candidate.

We were wrong. Cuomo won, but Teachout took a sizable chunk of the votes, 34 percent, even though she was heavily outspent. She didn’t do particularly well in New York City and Buffalo. Her strongest showing was upstate; she won 30 upstate counties, and ran close in many others.

Upstate New York has seen a strong anti-fracking movement take shape in recent years. The Marcellus Shale natural gas deposit, which stretches from Appalachia into upstate New York, drew gas companies that started fracking toward the end of the last decade. There was so much opposition to the industry that former Gov. David Paterson (D) issued a moratorium on fracking in 2008, pending a review of its potential impacts. The review is still ongoing, and so is the moratorium.

Meanwhile, local activists aren’t waiting to see how the state ultimately comes down on the issue. Eighty New York towns have passed their own fracking bans and 99 have passed moratoria. According to the FracTracker Alliance, another 87 towns have campaigns pushing for bans or moratoria. (Whether the towns have the right to ban the practice when it isn’t banned by state law is the subject of ongoing litigation.)

No one knows where Cuomo stands on fracking — maybe not even Cuomo himself. Since assuming the governorship in 2011, he has dodged the issue, calling for still more study before he makes a decision. Conventional wisdom among New York political observers holds that Cuomo has been waiting until he is safely reelected since it is such a controversial issue. “The delay is almost certainly political,” says Gerald Benjamin, an expert on New York politics and professor at SUNY New Paltz. “The classic pattern in New York is to postpone hard decisions until the year after the gubernatorial election because that’s when the legislature and governor are most distant from the next election.”

Teachout, in contrast, was clear right from the start. She promised to ban fracking on her first day in office. And so she was able to tap into that network of activists known as “fracktivists.” As Capital New York wrote after the primary, “[Teachout] won many of the counties that overlay the gas-rich Marcellus shale. Teachout … attributed her showing in those counties to highly motivated opponents of fracking. ‘I don’t think you can ignore the electoral force of the fracktivists,’ she told WNBF … in one of her first post-election interviews.” Tompkins County, for example, is home to the liberal college town of Ithaca, which Capital New York calls “ground zero for anti-fracking sentiment in New York.” Teachout won 71 percent of the vote there.

“What Zephyr was able to do was to take the anti-fracking movement’s concerns, tie them up with the climate movement concerns, and then offer the solutions,” says actor Mark Ruffalo, an upstate New York resident and high-profile fracktivist, referring to Teachout’s support for clean energy.

“Our strategy was to find groups of people who were already organized around issues we care about because we didn’t have time to build our own campaign-specific organization,” says Kate Albright-Hanna, the Teachout campaign’s communications director. “The fracktivists were huge. It was one of our main issues. We went across the border to Pennsylvania to tour a fracking site. It was so important to us that we crossed a state border to meet with fracktivists there.”

And so the question now becomes whether Teachout’s surprisingly serious challenge to Cuomo will influence his thinking on fracking. After all, no one ever expected Teachout to win. The point of her candidacy was to show Cuomo that New York liberals are not to be taken for granted, and that they care about social justice issues, from raising the minimum wage to keeping their environment clean.

Cuomo is widely seen in New York political circles as a shrewd and ambitious political operator who has avoided taking a stance on fracking because he wants to run for president one day. President Obama supports fracking, and so does Hillary Clinton, but perhaps Cuomo will come to see that the tide is turning against it in his party.

He would probably be wise to. Polling shows that in New York’s gas-rich Southern Tier/Finger Lakes and Catskills/Hudson Valley regions, majorities now oppose fracking — not just majorities of Democrats, but majorities across the board. According to a July poll from Siena College, 51 percent of voters in the two regions oppose allowing fracking, versus 35 percent who support it. That’s especially notable because it outpaces opposition in New York state overall, even though the state as a whole is more liberal than those two regions. In a Quinnipiac University poll from August, New Yorkers opposed fracking 48-43. So it is those who have to live with the consequences of fracking who are most likely to oppose it. And if Cuomo looks beyond New York, he’ll see fracking opposition building up everywhere fracking is taking hold, from Colorado to even Texas. 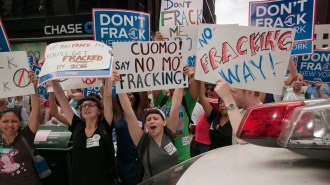 The fracktivists have been Cuomo’s most consistent critics. “This issue has hounded him,” says Laura Haight, senior environmental associate at NYPIRG, which opposes fracking. “At the beginning no one [in New York state politics] dared come out against Cuomo, but the fracking opponents were everywhere: a speech, a birthday party, or book signing.” They’re still there. On primary day, they were outside his polling place in Mt. Kisco, the New York City suburb in Westchester County. “If he’s smart, he’ll recognize this is a powerful issue with a well-organized constituency,” says Albright-Hanna.

Cuomo is smart, but his intelligence may be matched by his brooding self-righteousness. According to The New York Times, Cuomo is dismissing Teachout supporters as selfish special-interest voters:

He said the voters who opposed him were not doing so out of unhappiness with his economic centrism or his broader philosophy. Rather, he said they wanted something from him — for instance, a more favorable contract, in the case of a union of state workers that endorsed Ms. Teachout.

“Don’t call them Democrats or liberals,” the governor said. “This is not about an ideology. It’s about a transaction.”

He described the primary result as “liberating,” noting that he did not lose, despite the unhappiness from the unions.

“You can do the right thing, and endure the political retaliation, and still get 60 percent,” Mr. Cuomo said, describing his lesson from the primary.

That’s not the lesson a more humble person would take from losing a third of his party’s primary votes to a political neophyte.

But Cuomo, who’s virtually assured of winning the general election in this solidly blue state, may yet give in to pragmatic considerations on some of Teachout’s signature issues. Benjamin predicts that Cuomo is likely to accept at least a compromise with anti-fracking activists, such as lifting the moratorium but allowing towns to ban fracking.

If Democrats win the State Senate in November, Cuomo may be forced to confront the issue as soon as early 2015. The State Assembly, which is already controlled by Democrats, has repeatedly passed bills that would create a moratorium with the force and certainty of state law, but they’ve been blocked by the State Senate, which is governed by a coalition of Republicans and breakaway Democrats. Sen. Andrea Stewart-Cousins, who would become co-leader of a Democratic State Senate, told Capital New York that if Democrats take back the Senate — odds are roughly even that they will — they will immediately take up bills on fracking regulation and moratoria, but not an outright ban.

If New York does take a serious stand against fracking, Teachout will have shown that environmentalists can discipline Democrats into standing more firmly against fossil fuels.

Correction: This post originally stated that Ithaca is in Thompson County. In fact, the correct name is Tompkins County.

This fracking company wants to end breast cancer — wait, what?