World leaders adopt 1.5 C goal -- and we're damn well going to hold them to it 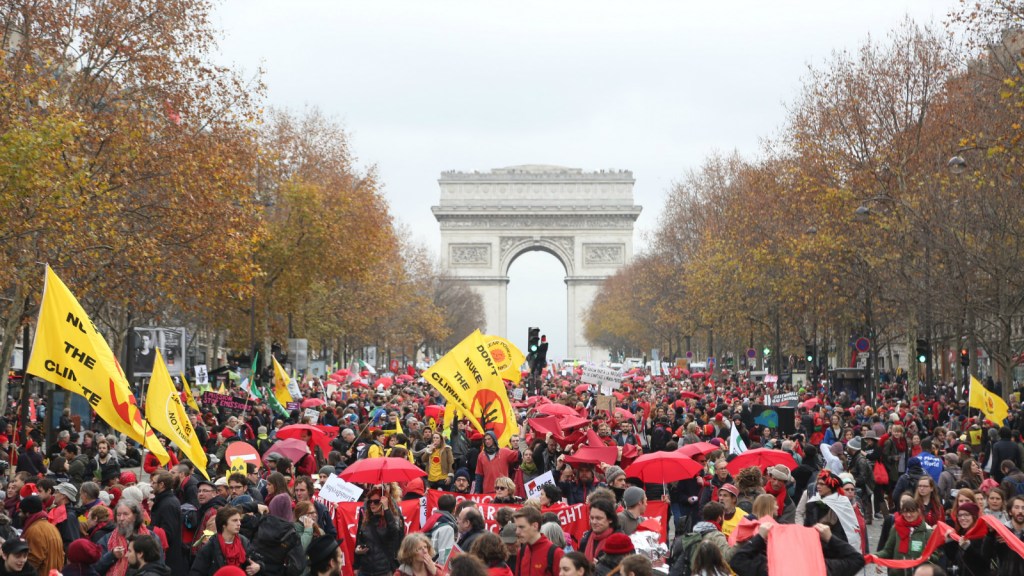 World leaders adopt 1.5 C goal — and we’re damn well going to hold them to it

PARIS, France — Here’s the crucial plaintive paragraph from the preamble to the Paris climate agreement released today, written in the almost indecipherable bureaucratese that attends this international circus:

Emphasizing with serious concern the urgent need to address the significant gap between the aggregate effect of Parties’ mitigation pledges in terms of global annual emissions of greenhouse gases by 2020 and aggregate emission pathways consistent with holding the increase in the global average temperature to well below 2 °C above pre-industrial levels and pursuing efforts to limit the temperature increase to 1.5 °C …

What it says is: The world is a doughy fellow who has promised to drop three suit sizes in time for his wedding, which is now only a month away. The world is an anxious student who has to ace the next morning’s test to pass the course but hasn’t yet started to study. The world has promised his kids a great raft of presents under the tree, but now it’s suddenly Christmas Eve and the shops have started closing.

The “significant gap” is the crucial thing. In the agreement, the world promises to hold the rise in the planet’s temperature to below 2 degrees Celsius. Heck, it promises to aim for 1.5 degrees, which is extraordinary. It’s what actually needs to be done; if we succeeded, it might just head off complete calamity. (We’re now at 1 degree above average pre-industrial temperatures, and considering what that’s already done in terms of melt, flood, and drought, 1.5 C will still be trouble, but maybe manageable trouble.)

But once you get past the promises part, the actual plans submitted by various governments commit the world to a temperature rise of 3.5 degrees, which is more or less the same as hell. It’s a broken planet. This is the difference between hoping and doing — a common enough part of the human condition. I kind of hoped I wouldn’t buy the pain au chocolat at the boulangerie down the street this morning. I had good ambitions. But, you know.

So if you want to be cynical about the Paris agreement, there’s plenty of reason.

But if you want to be hopeful, here’s the thing: The world’s governments have now announced their intentions. And so the rest of us can hold them to those promises, or at least try. What, you want to build a pipeline? I thought you were going to go for 1.5 degrees. You want to frack? Are you fracking kidding me? You said you were going for 2 degrees at the absolute worst.

This is a little like that moment when Barack Obama, upon winning the Democratic nomination in 2008, said that his administration would mark the moment “when the rise of the oceans began to slow.” He soon forgot about it, but the rest of us didn’t, and those words appeared on a thousand placards in the course of the fight over Keystone. Which we won.

Now every world leader has said something similar. And even if we harbor suspicions that they didn’t quite mean those words, we will use them again and again. We’ll be the nagging parent/teacher/spouse. We’ll assume they really want action. And we’ll demand they provide it.

Bill McKibben is the founder of 350.org and the Schumann Distinguished Scholar in Environmental Studies at Middlebury College. He is also a member of Grist’s board of directors.