So, I’ve got good news and bad news.

The good news: There is no substantial technical or economic barrier that would prevent the U.S. from reducing its greenhouse gas emissions 80 percent below 1990 levels by 2050, a target that would help put the world on track to limit global average temperature rise to 2 degrees Celsius. In fact, there are multiple pathways to that target, each involving a different mix of technologies. Achieving the goal would cost only around 1 percent of GDP a year out through 2050, and if we started now, we could allow infrastructure to turn over at its natural rate, avoiding stranded assets.

The bad news: Pulling it off would require immediate, intelligent, coordinated, vigorously executed policies that sustain themselves over decades. Y’know, like how America does. [cough]

These are the conclusions of a new report on U.S. decarbonization from the Deep Decarbonization Pathways Project, to which I drew your attention yesterday. The DDPP is a comprehensive attempt to determine how the world’s biggest emitters can put themselves on a pathway to the 2 degree target. It involves 15 research teams, one from each of the top 15 emitting countries, each doing work tailored to the economic and political conditions of its home country but meant, collectively, to create a global pathway to 2C. The preliminary results were released in September; now the chapter on the U.S. has been expanded into a full report.

To be clear, this is just a preliminary technical report. It does not address social and political questions, attempt comprehensive cost-benefit analysis, or recommend specific policies. It seeks only “to assess the technical and economic feasibility” of hitting an aggressive carbon target and “to understand what this goal implies for the magnitude, scope, and timing of required changes in the U.S. energy system.” Long story short: It implies large and rapid changes, undertaken immediately.

I know normal people are more interested in the results of these exercises than in the details of the modeling used to produce them, but for the geeks, here’s a list of the (uniformly conservative) assumptions the U.S. research team — Energy and Environmental Economics, in collaboration with researchers from Lawrence Berkeley National Laboratory and Pacific Northwest National Laboratory — used to shape the modeling process: 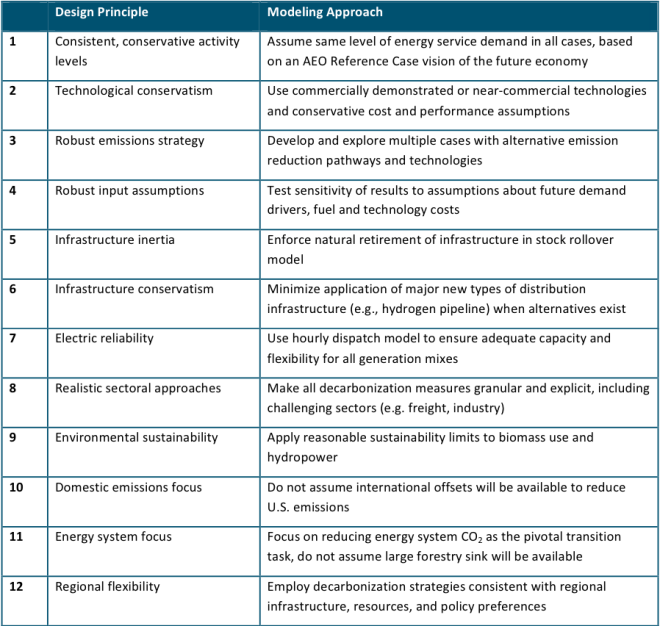 As you can see, all these design principles are contestable. A greater willingness to strand assets, faster technological development, sharply falling costs, more progress on forestries — any number of things could accelerate the transition or lower its costs. The most foundational assumption isn’t even listed here, namely: The research team only considered scenarios compatible with robust continued economic growth in the U.S. (growth of about 2 percent a year). Question that assumption, allow for slower growth or even a period of steady state, and whole new vistas of ambition come into view. But of course that idea is verboten in civilized circles.

Here are the questions the research team considered, the determinants that shape the pathways it developed: 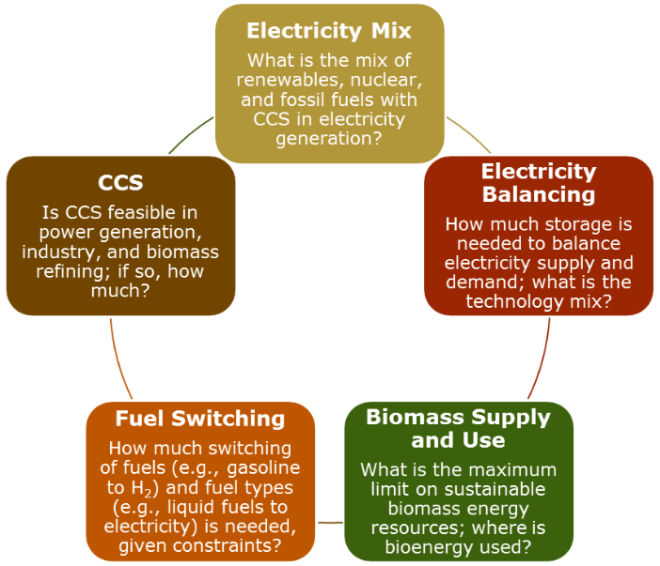 With these questions in mind, the team developed four different scenarios: High Renewables, High Nuclear, High CCS, and Mixed Case (with an even balance of the three sources). All were able to achieve the carbon target.

All scenarios used three primary strategies: “(1) highly efficient end use of energy in buildings, transportation, and industry; (2) decarbonization of electricity and other fuels; and (3) fuel switching of end uses from high-carbon to low-carbon supplies, primarily electric.”

Here, for reference, is how various reductions stack up in the Mixed Case: 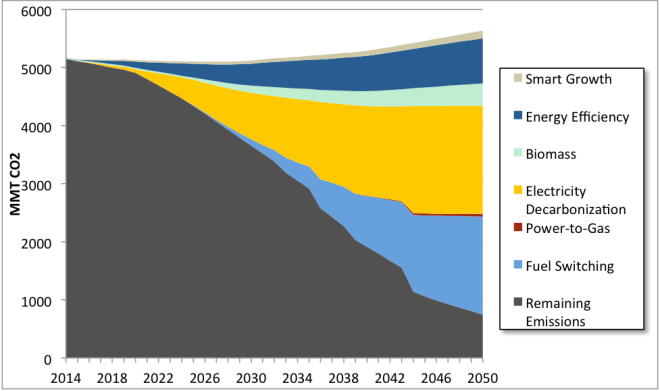 An interesting note on fuel switching: Because much deep decarbonization involves shifting end uses (transportation, heating, water heating) to electricity, all four scenarios have to account for much higher electricity demand. Electricity and electric fuels like hydrogen today account for just over 20 percent of final energy use; in these scenarios, that would rise to over 50 percent by 2050. Electricity would take over almost all residential energy demand and the vast bulk of commercial demand. Also, electric vehicles, plug-in electric vehicles, and hydrogen fuel-cell vehicles together would comprise all but a fraction of demand for light-duty vehicles. (Diesel and liquid natural gas would continue to dominate in heavy-duty vehicles.) 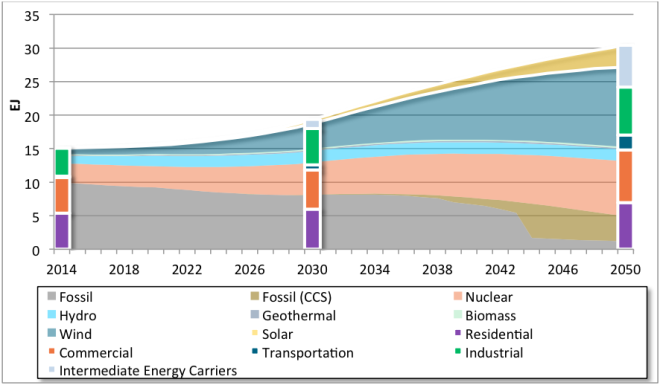 Clean electricity, in other words, is the linchpin of deep decarbonization.

If you’re interested in digging deeper, in the report there are sector-by-sector breakdowns of energy supply and demand for each of the four scenarios, extending out to 2050. So many graphs! But I don’t want to test your patience.

How much will all this cost? It’s difficult to say, since it involves projecting technology development and lifestyle patterns out 35 years in the future. To wit: “Based on an uncertainty analysis of key cost parameters, the interquartile range of incremental energy system costs extends from negative $250 billion to $1 trillion across all cases.” That’s a wide range of possibilities!

The authors stress that they make uniformly conservative assumptions on this score; if there are steep cost declines in any particular technology — or shifts in U.S. consumption patterns — the overall cost could be lower. Here’s what those conservative estimates of cost ranges look like: 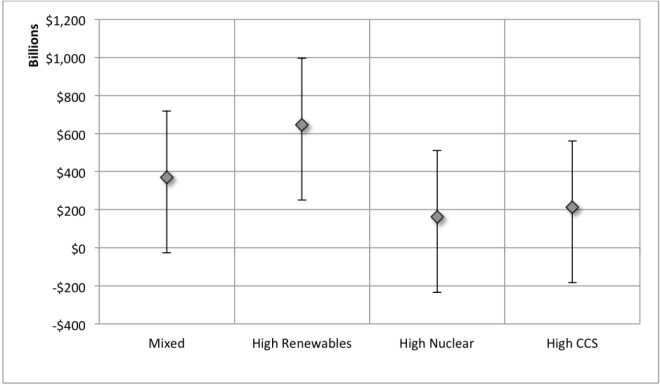 A few notes on this.

First, these are only incremental technology costs — i.e., the amount we’d pay for these technologies over and above what we’re already expected to spend on energy tech. The social and health co-benefits, which would lower the net costs, have not been accounted for. I suspect that when they are, in the full report next year, the High Renewables scenario will look much better. In fact, once the benefits of avoided pollution and climate change are included, I expect most of these positive costs to go negative.

Second, one reason the High Renewables costs are higher is that you have to build a lot more renewable energy capacity to get the same amount of power, since the “capacity factor” of renewable energy tends to be much lower than equivalent fossil or nuclear fueled power plants. (You can run a nuke plant almost continuously; wind only produces power when the wind is blowing.)

Third, all these cost projections are based on disputable assumptions. Plenty of people would (and will) argue that renewable energy costs are going to fall far faster than nuclear or CCS. But we’ll save those arguments for the next report. 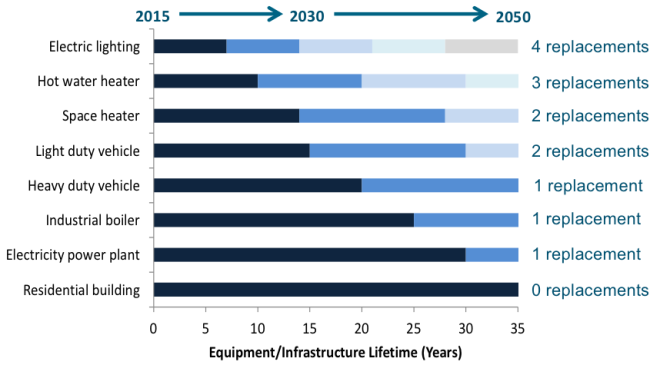 As you can see, when it comes to things like buildings and power plants, we may only get one shot at low-carbon replacement in the next 35 years. We’ve got to get it right.

Relatedly, the report says this about Obama’s newly announced target to reduce U.S. emissions 26 to 28 percent below 2005 levels by 2025:

From the perspective of this study, there are different ways that the U.S. can achieve the 2025 target, some of which would lay the necessary groundwork for deeper reductions to follow, and others that might meet the target but tend to produce flat, rather than declining, emissions in the long term. This indicates the importance of evaluating near-term approaches in the light of deep decarbonization.

Exactly. There are plenty of gimmicks that could pull emissions down slightly over the next decade, but do not lay the foundation for further reductions. (Arguably, the rush to natural gas is just such a gimmick.) That is the value of the DDPP report — it pulls our attention out farther, makes us think about the trajectory of policy over a century’s time.

Sadly, America doesn’t seem much capable of thinking long-term any more, which is probably why this report was almost entirely ignored in the U.S. press.

Nonetheless: We now know, with a pretty high degree of confidence, that we could tackle climate change if wanted to. All that remains is to decide if we want to.