As citizens of Ukraine shelter in place due to the coronavirus pandemic, the country is suddenly facing another apocalyptic disaster: wildfires raging in Chernobyl’s exclusion zone.

The fires, which began 10 days ago in the western part of the zone, have spread through nearby forests, raising columns of smoke that could be contaminated with radiation. Although average radiation levels around Chernobyl are only about a quarter of what they were in the immediate aftermath of the disaster, trees and moss can absorb radiation from the soil and then spread it into the air when burned. 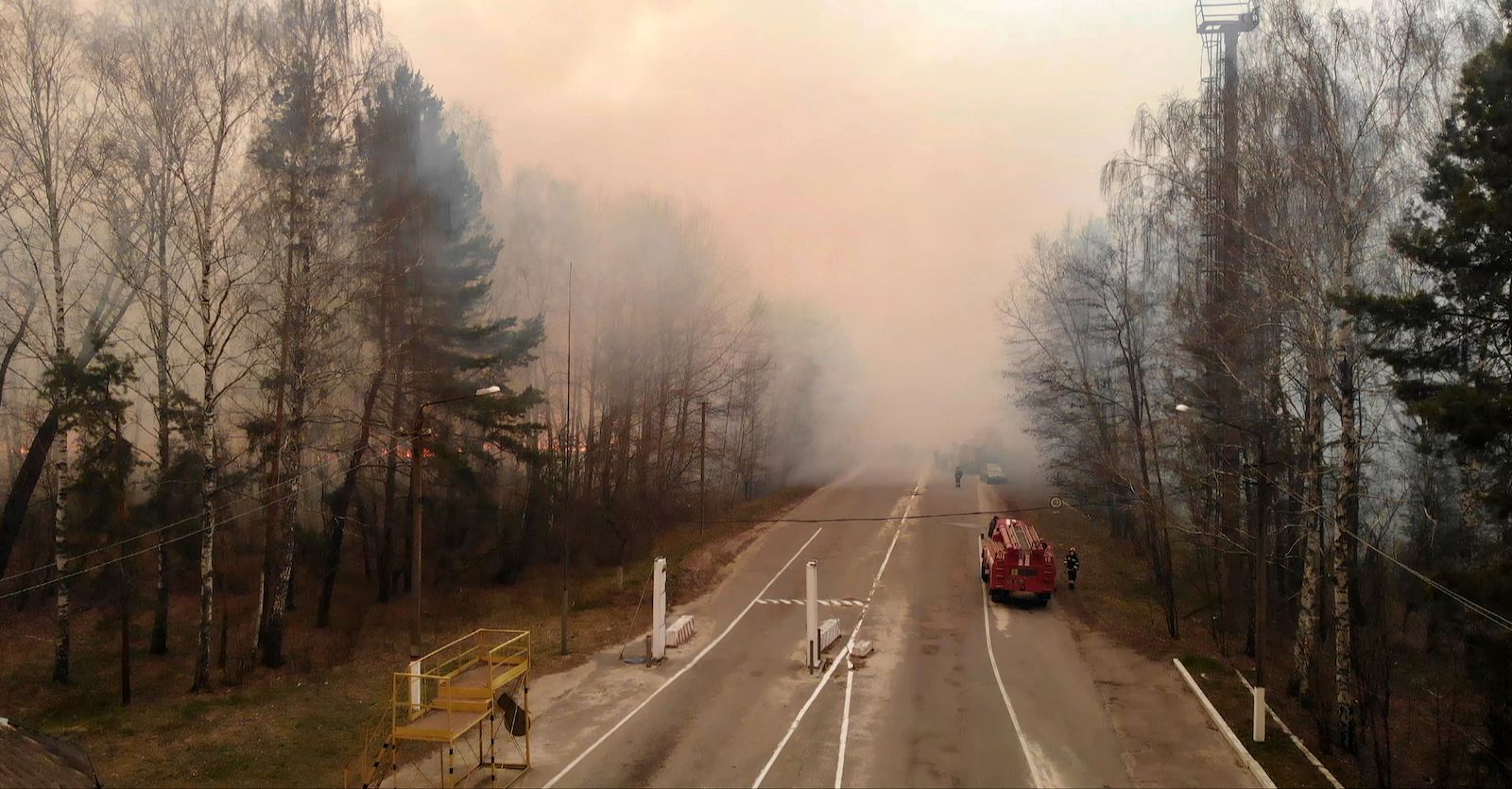 The area surrounding the site of the 1986 nuclear disaster has remained uninhabited for decades. After one of the plant’s reactors exploded — forcing evacuation of nearly 100,000 people and causing at least 31 deaths directly and possibly thousands indirectly — authorities established an 18-mile “Zone of Alienation” around the abandoned plant where visitors are restricted and human habitation is largely forbidden. Nevertheless, the zone is visited by tens of thousands of tourists every year.

Ukrainian officials have contradicted themselves over whether radiation levels in the area have risen due to the fires. The head of the Ukrainian ecological inspection service initially reported on Facebook that radiation had increased to 16 times above normal levels, but he later retracted his statement. Government officials now insist that radiation levels are “within normal limits.” 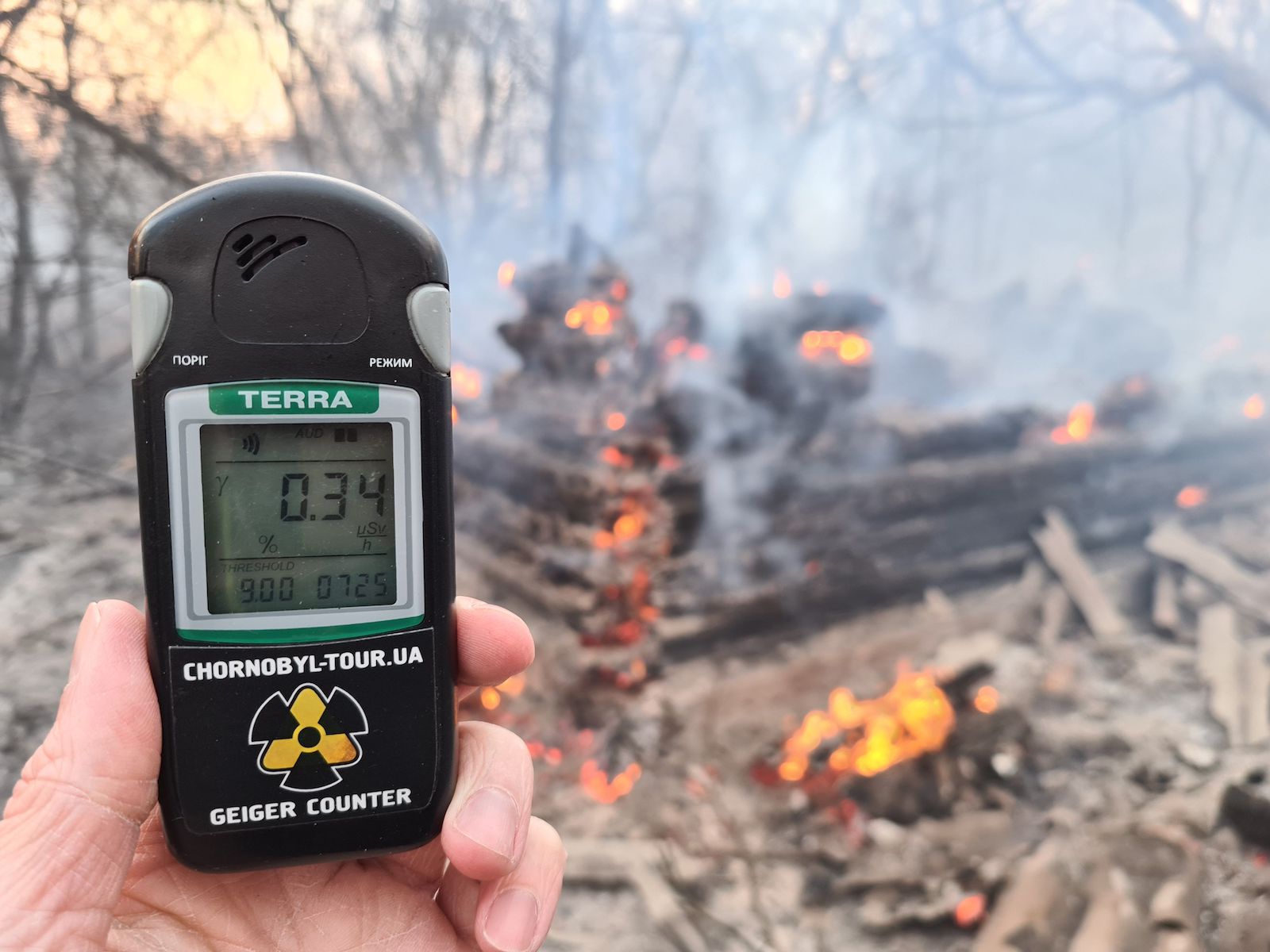 A person holds a Geiger counter at the scene of a forest fire at the Chernobyl exclusion zone, not far from the nuclear power plant. Yaroslav Emelianenko / AFP / Getty Images

The biggest danger is that the fires could reach the abandoned plant, or highly contaminated vehicles left in the exclusion zone. According to Greenpeace Russia, satellite images reveal that the fires have spread over 177 square miles and one is now only a kilometer (0.6 miles) from the plant itself.

Researchers have been concerned for years that a lack of forest management in the exclusion zone — combined with high temperatures and increased risk of drought due to climate change — could create the perfect conditions for a dangerous wildfire outbreak. Spring and summer temperatures near Chernobyl have steadily warmed since 1990, creating conditions that make wildfires more likely to spread.

And Chernobyl isn’t the only place where wildfires can stir up contaminants from the past. In the Western U.S., scientists believe fire seasons are spreading pollutants that have been hiding in vegetation after being emitted by cars and industrial processes decades ago. Research shows that lead particles, which can cause neurological damage in children, are being released back into the atmosphere by forest fires.

So far, radiation levels in the Ukraine’s nearby capital of 3 million people, Kyiv, have not been affected by the fires. But the unfolding situation is a grim reminder that some environmental disasters — like Chernobyl — are never entirely over.

How to help your neighbors when a pandemic hits? Exhibit A: Museums.