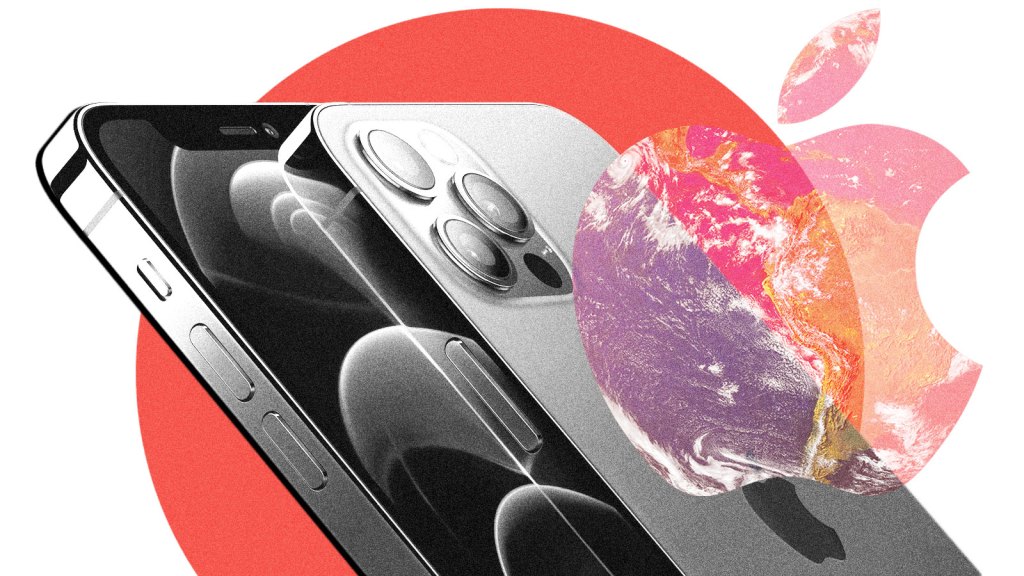 Last week, Apple announced its “best iPhone ever,” a new generation of its smartphone that comes with 5G, night-mode cameras, and a ceramic shield to protect it from damage. Apple claims that its “iPhone 12 models were designed with the environment in mind.” But is the iPhone 12 really Apple’s greenest iPhone ever?

Coverage of the iPhone 12’s carbon footprint thus far has mostly focused on Apple’s decision not to include its signature earbuds and wall charger, the white block that connects a USB cord to the electrical outlet, in sales of its new iPhones and, starting now, sales of older generations of iPhone, too. The company says that slimming down its packaging and using fewer raw materials per box, which only includes the phone and a USB-C cord, will help it “reach our environmental goals.”

The move will cut more than 2.2 million tons (2 million metric tons) of carbon emissions every year, Apple says, but it’s unclear how the company’s environmental footprint will fare if and when millions of new iPhone 12 owners decide to purchase EarPods or an adapter separately. And critics say that Apple’s decision to leave out chargers and headphones might do more for the company’s profit margins than it does for the planet.

But there are other problems with the new iPhone’s environmental profile. In the environmental report for its iPhone 12 Pro Max, Apple notes that the basic configuration, at 128 gigabytes, produces 190 pounds (86 kilograms) of CO2, 8 percent more emissions than the basic configuration of the previous generation of iPhone. That’s in terms of life-cycle emissions — the amount of greenhouse gas emissions it takes to make, sell, use, and recover an iPhone from cradle to, er, recycling robot. With storage upgrades — 256 and 512 gigabytes — the iPhone 12 Pro Max emits 212 pounds (96 kilograms) and 243 pounds (110 kilograms) of CO2, respectively — just one less kilogram than their iPhone 11 counterparts each.

The company says the 8 percent emissions increase for the basic model results from doubling the base storage capacity from 64 gigabytes and including 5G cellular technology. But it’s striking in the context of the ambitious climate plan that Apple announced in July, aiming to get “zero climate impact” products into the hands of consumers by 2030. The new iPhone 12 Pro Max is moving the needle in the wrong direction. An Apple spokesperson declined to comment on the emissions increase.

Millions of iPhone users could upgrade to the iPhone 12 using Apple’s upgrade program, which is aimed at tempting Apple customers to upgrade to a new iPhone every single year. Apple touts the program as an environmental win. “Turn the device you have into the one you want,” the trade-in webpage says. “No matter the model or condition, we can turn it into something good for you and good for the planet.” An Apple spokesperson told Grist that the entirety of each old iPhone returned to Apple under the upgrade program ends up getting reused in some way. The company refurbishes and resells iPhones in good condition, and devices that can’t be refurbished are pulled apart for pieces by Apple’s two recycling robots, dubbed Daisy and Dave.

Apple definitely has the reuse and recycle portions of the sustainability equation down, but its upgrade program doesn’t exactly encourage people to take the first and most important step: reduce. That’s important, because refurbishing or recycling your phone isn’t as effective, in terms of lowering emissions and conserving resources, as using it for as long as possible.

One good way to encourage consumers to extend the life spans of their phones would be to recognize their “right to repair.” Apple could make a real difference if it shifted to a business model that encourages its customers to repair their old products instead of buying new ones, the way Patagonia, the outdoor clothing and gear company, has done. But Apple still hasn’t changed its repair policy to allow users and independent fixers to fix phones without Apple’s permission.

In lieu of a wall charger and EarPods, Apple might want to include a repair kit with its iPhone 13s next year.