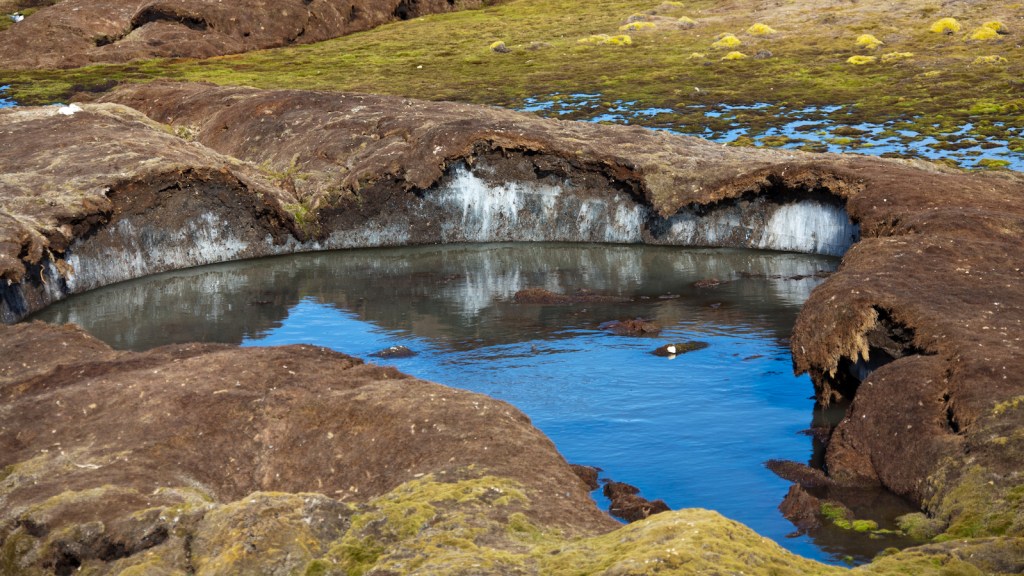 Thawing permafrost might result in more carbon emissions than previously thought. The culprit? Sunshine. In a new study, researchers from the University of Michigan and Woods Hole Oceanographic Institution simulated the impacts of sunlight on the carbon contained in thawing Arctic soils and calculated that it might increase existing estimates of carbon emissions from permafrost melt by 14 percent.

Permafrost consists of ancient Arctic soils that normally remain frozen year-round. As the Arctic warms, however, these soils are starting to thaw. This thawing could lead to runaway carbon emissions from the region — in fact, the thawing of Arctic permafrost has been called one of the earth’s nine climate tipping points, where positive feedbacks in a system could lead to long-term and irreversible changes.

Permafrost contains somewhere between 1,460 and 1,600 billion metric tons of organic carbon in the form of dead plants, animals, and microbes — almost twice the amount of carbon that is currently in the atmosphere. As these soils thaw, the organic material locked inside them is decomposed by microbes, releasing carbon dioxide. This feedback — permafrost thaw releasing CO2, which contributes to climate change, which causes rising Arctic temperatures and further permafrost thaw — is a major climate concern.

Currently, the permafrost region remains a net sink of CO2, absorbing more CO2 than it releases thanks to the plants and algae that grow there. But David McGuire, a research ecologist for the U.S. Geological Survey, says this is set to change. “The models ultimately all say that the permafrost region is going to become a source” of CO2, he told Grist. “The question is the timing.” McGuire and his colleagues estimate that the permafrost region could emit 208 billion metric tons of carbon into the atmosphere between now and 2299, leading to 0.3 to 0.4 degrees C (0.5 to 0.7 degrees F) of additional warming.

The new research from the University of Michigan says 208 billion metric tons might be an underestimate. The study looks at the impact of photomineralization, a process by which organic carbon released from permafrost soils and dissolved into streams and rivers is broken down by sunlight and released in the form of CO2. This process is important in the annual carbon cycle of the Arctic but had not previously been understood in the context of melting permafrost. This process alone could release an additional 30 billion metric tons of carbon into the atmosphere, adding 14 percent to current estimates. According to Rose Cory, an associate professor of aquatic geochemistry at the University of Michigan and the study’s lead author, “This is a process that is not currently included in models and can only be a loss of carbon dioxide to the atmosphere.”

To estimate the impact of sunlight on organic soil carbon, Cory’s team needed to figure out how to mimic sunshine in the laboratory. Colin Ward, an assistant scientist in marine chemistry and geochemistry at Woods Hole Oceanographic Institution, built an instrument that exposes samples of organic carbon from arctic permafrost to LED lights in order to test how they react to different wavelengths of light across both the visible and UV spectrum. The exact impact of different wavelengths of light on soil carbon from permafrost had not been previously measured. “The reason we could come up with this number of 30 petagrams” — that is, 30 billion metric tons — “is due to the wavelength-specific data,” said Cory, “It’s really what makes it possible to say with confidence the potential amount of CO2 that will come from this process.”

As temperatures in the Arctic soar to record heights, scientists are watching the permafrost region closely. “Permafrost thawing is really important particularly because it’s irreversible,” said Timothy Lenton, the director of the Global Systems Institute at University of Exeter whose research originally identified the permafrost region as a climate tipping point. “Once you commit to losing permafrost and the associated carbon, you’re not going to get that carbon back.”