Beyond 'Climate Pledge Arena': Are Amazon's climate goals for real? 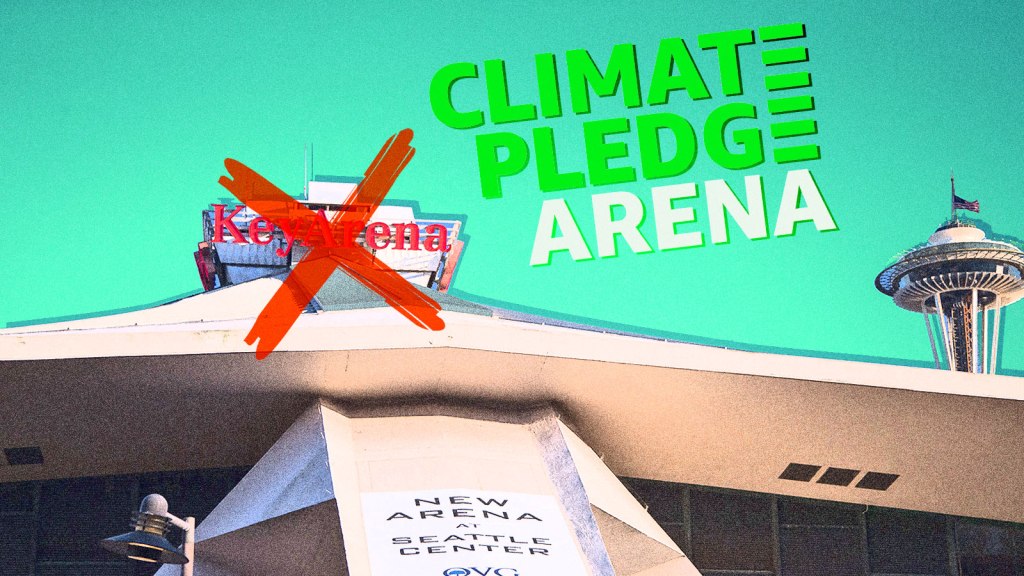 Beyond ‘Climate Pledge Arena’: Are Amazon’s climate goals for real?

On the same day last week that Amazon announced a $2 billion fund to bolster and develop low-carbon technologies, the company also quietly released its 2019 sustainability report. It showed that the total carbon emitted by the world’s largest online retailer actually increased by 15 percent compared to the previous year.

That timing raised a lot of eyebrows, and skeptics grew even warier on Thursday, when Amazon announced that it was christening a Seattle stadium the “Climate Pledge Arena,” named for the company’s recent plan to achieve net-zero carbon emissions by 2040. In order to inspire “global climate action,” a press release said, the venue would be outfitted with all-electric operations and an ice rink filled with reclaimed rainwater — making it “the greenest ice in the NHL.”

Amazon Employees for Climate Justice, or AECJ, a group of nearly 9,000 workers that has been openly calling on company leadership to take stronger climate action since April 2019, was quick to criticize the announcements. “This obvious PR stunt is indicative of the company’s entire approach to climate change,” the group tweeted on Thursday. “Pledges and symbols without real action.”

ACEJ and other Amazon critics say that the company is using deceptive carbon accounting techniques to distract from its increasing emissions. They also fault Amazon’s Climate Pledge Fund for focusing on technocratic solutions to the climate crisis, rather than on environmental justice. (In response to an emailed list of questions asking for the company’s response to these critiques, Amazon reiterated its commitment to its net-zero emissions plan, as well as its new venture fund and the arena.)

To Genevieve Guenther, founder and director of the nonprofit End Climate Silence, this all amounts to “full-stop greenwashing.” “If you drill down into the language of the announcement,” she told Grist, “you get deeper and deeper reservoirs of bullshit.”

One example is the way that Amazon calculated and presented its 2019 carbon footprint. In its sustainability report, Amazon attempts to justify its 15 percent emissions hike by pointing to a 22 percent sales increase, saying that because sales rose faster than emissions, the greenhouse gas associated with each dollar of production actually decreased 5 percent in 2019. Both Guenther and AECJ said that this focus on the so-called “carbon intensity” of Amazon’s operations distracts from its increasing emissions overall.

“Dollars are irrelevant to the health and sustainability of the planet,” AECJ tweeted. “‘Carbon intensity’ allows Amazon to prop its planet-harming profits up alongside its carbon emissions & claim the company is making relative progress.”

Critics also noted that Amazon didn’t account for emissions stemming from the supply chain and manufacture of the products that it sells, except for items sold under the Amazon brand name. However, the company did include those non-Amazon products’ sales in its carbon intensity calculations. According to University of Washington professors Aseem Prakash and Nives Dolsak, this means that Amazon is inflating its estimate of the drop in carbon intensity while “grossly under-accounting” its net emissions.

Most disturbing to many critics is Amazon’s relative silence on its ongoing relationship with the fossil fuel industry through Amazon Web Services, known as AWS. In an aggressive competition with other tech giants like Microsoft and Google, Amazon solicits business from oil and gas companies, promising to provide machine learning and other data-based services to help scout for, drill, and extract more fossil fuels. There was no news on Amazon’s AWS partnerships in last week’s press releases.

Sharon George, a senior lecturer on environmental sustainability at Keele University in the United Kingdom, also said that the climate venture fund’s emphasis on technological innovation could distract from the importance of rapid decarbonization.

“I think there’s a danger that technological fixes are seen as the solution to allow companies to just keep doing what they always did,” she told Grist. “Technology can help but it shouldn’t be seen as the whole solution.”

In fact, some climate researchers say we already have the technology necessary to reach negative emissions by the 2040s. Besides, viewing the climate crisis as a purely technological issue elides environmental justice concerns, according to ACEJ. The group says that Amazon’s Climate Pledge Arena will pour dollars into Seattle’s affluent, predominantly white Queen Anne neighborhood, while doing little to mitigate the effects of its pollution-intensive shipping and warehouse operations in poorer and nonwhite neighborhoods.

Amazon’s promise to use carbon offsets to achieve “net-zero” emissions poses further environmental justice concerns. For example, Amazon has said it will neutralize any remaining emissions from its Climate Pledge Arena by planting trees, likely in the global south. But besides being questionably effective carbon sinks — trees can die or be killed, after all, especially in a world where massive wildfires are increasingly prevalent —these efforts may have adverse human rights implications: Some reforestation schemes have been shown to drive food insecurity or displace Indigenous peoples.

“At the end of the day, [carbon offsets] can create more problems than they solve,” said Jesse Bragg, media director for the nonprofit Corporate Accountability, in an interview with Grist. “Any plan that seeks to get to net-zero or to get to zero by offsetting emissions is missing the point.”

Instead of starting a $2 billion climate venture fund, Bragg argued, Amazon could withdraw its funding from think tanks hostile to climate action. It could end AWS partnerships with the fossil fuel industry. Or, instead of trying to more sustainably ship 10 billion packages around the world every year, it could simply ship fewer packages.

But if climate action means scaling back, Bragg said, “you can bet that Jeff Bezos or anyone involved in the boardroom is not interested in having that discussion.”

As AECJ has noted, Amazon’s publicly-disclosed emissions report now allows the company to be held accountable for its carbon footprint. However, the group also believes that it shows that the company is still prioritizing growth and sales over the urgent need to reduce overall carbon emissions and protect vulnerable communities. Absent a massive change in its business model, many say they lack confidence that Amazon will make good on its pledge to the climate.

“With the COVID situation where people have been doing more buying online,” George told Grist, “I would be amazed if their climate emissions over the next year aren’t even higher.”