David Saldaña spends his mornings driving around the Harbor area of Los Angeles, scouting out local businesses. When the 28-year-old spots one, he’ll walk in, give them his business card with FoodCycle LA, and ask them to donate food to local pantries — not stuff that’s fresh off the shelf, but the stuff that’s past the sell-by date and destined for the dumpster even though it’s perfectly edible. He’s one of the first members of the California Climate Action Corps, a program that’s taking on climate change by planting trees, protecting homes from wildfires, and rescuing food waste across the state.

“We fight food waste by getting it into the mouths of hungry people instead of going to landfills,” where it rots and emits methane, Saldaña said.

He grew up in Compton, California, and has seen California’s wildfire season, typically confined to the summer and fall, become all year-long. Saldaña saved up money to attend California State University, Dominguez Hills, where he studied dendrochronology — using tree rings to see the past — and hopes to return one day to get a PhD. The corps presented the perfect opportunity to do something hands-on about the climate crisis. “There’s lots of data, and there’s activists, but there seems to be a bridge in the middle that hasn’t quite formed,” he said.

Announced by Governor Gavin Newsom last September, the California Climate Action Corps is the first statewide program of its kind, and a potential model for a national version. In January, President Joe Biden signed an executive order to create the Civilian Climate Corps, telling government agencies to come up with a plan by the end of April. “We definitely are talking to and working with members of the administration,” said Josh Fryday, California’s chief service officer, who runs the state’s corps. Soon enough, people around the country might be able to sign up for the kind of work Saldaña is doing.

A climate corps, the thinking goes, could tackle two disasters at once: the climate crisis and the pandemic-induced economic crisis. With 19 million Americans on unemployment benefits, the government estimates that the workforce won’t recover until 2024.

Biden’s corps is imagined as a modern-day version of the Civilian Conservation Corps, or CCC, President Franklin D. Roosevelt’s popular New Deal program which employed 3 million Americans to help families survive the Great Depression. Although there are other “climate corps” led by nonprofits, Fryday says his state’s program is breaking ground. Fellows do the work of community organizers, “building opportunities for other members of the community to volunteer and be part of climate action.”

Fryday hopes Biden’s CCC will take a similar approach by partnering with local communities, focusing on the ones that are vulnerable to the effects of climate change and have the least resources to deal with them. Before the fellows were put to work, the California Climate Action Corps consulted local leaders and nonprofits around the state, asking what their climate goals were and how the corps could help accomplish them.

The program’s roster of 63 fellows are working with nonprofits and local governments in Los Angeles, Redlands, Fresno, Stockton, and San Jose. They range in age from their early 20s to mid-30s, though Fryday hopes the program will appeal to a broader spectrum. By the end of the first year, he expects that about 300 fellows will have come through the California corps, many of them serving a shorter summer term. Fellows typically serve 7 and a half months or one year.

Of course, during a global pandemic, much of the work takes place through a screen. The corps members keep in touch over the messaging platform Discord. “We send each other love, we send each other playlists, memes — something to say to each other, ‘Hey, you know, we’re here if you need us,’” Saldaña said. 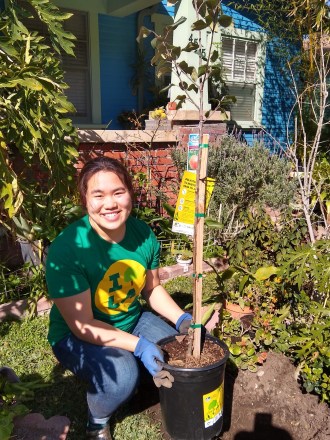 Another fellow, Kimberly Guo, 25, is working on a forest management plan for Los Angeles with the City Plants. City planning practices have left some formerly redlined neighborhoods with fewer parks and street trees, which makes deadly heat waves even hotter. “There’s a lot of areas where there just isn’t space to plant trees because of wires, because of small sidewalks,” Guo said, and she’s hoping to help the organization find ways to fix these problems. “My day-to-day is part research, part meetings, part typing,” she said. While the work may not be glamorous, Guo said, it’s helping her clarify her career path.

Fryday doesn’t pretend the program is a perfect model for a federal version after just a month or two of practice. One big issue facing Biden’s proposed CCC is funding. Some have argued for establishing the CCC quickly and cheaply by repurposing AmeriCorps, a federal program that sends people into service positions around the country. But that could mean low wages for corps members.

While the California program is funded through AmeriCorps, Fryday said, it’s supplemented by state money and philanthropy. That puts fellows’ pay at about $22,000 a year, along with a $10,000 education stipend to put toward student debt or future schooling. “It averages out to about $18 or $19 an hour,” Fryday said. “Now, granted, we’re not naive — we understand that an education award is different than your pay.” The point is, he said, that the program has taken steps to make it an option for everyone, including those from disadvantaged communities, and that they’re working to make it more accessible. “We’re just hopeful and optimistic that the Biden administration will follow suit.”

California’s experience suggests that at least one thing might be easy for the national CCC: recruitment. After only three or four weeks of spreading the news of openings by word-of-mouth in October, the California corps had about five applications for every slot available, Fryday said. “The program is brand new, so no one had heard of it,” he said. “People are thirsty to take action on this issue.”