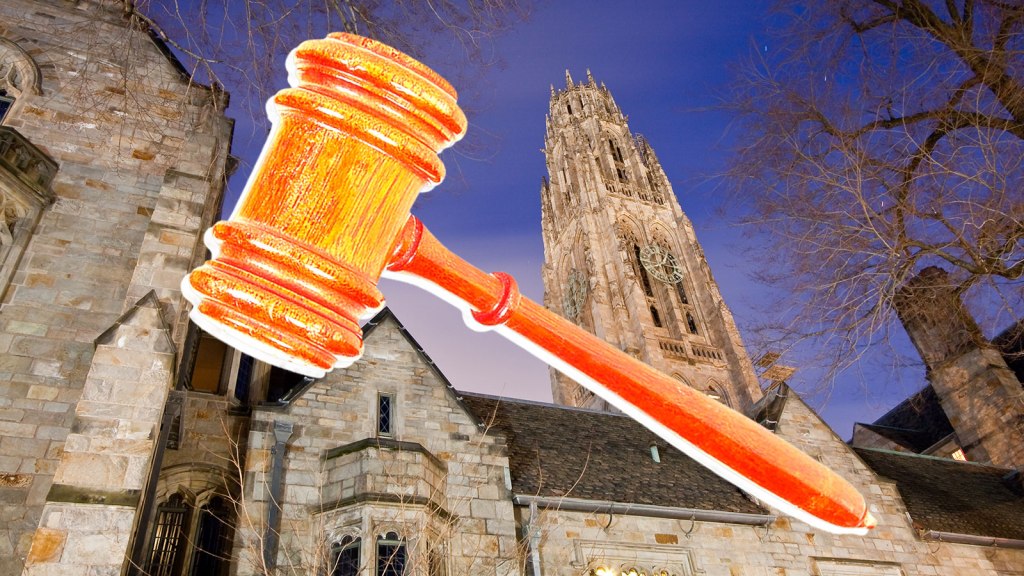 What started as a single protest against the law firm Paul, Weiss, Rifkind, Wharton & Garrison LLP by law students from Harvard University last month is now growing into a movement.

During a recruitment event in New Haven, Connecticut on Thursday night for Yale Law students, 40 protestors unveiled a “#DROPEXXON” banner and began to chant at the other students and Paul, Weiss partners mingling with glasses of wine and cocktails at the bar.

“You heard it from students at Harvard, and now you’ll hear it from us,” they shouted in a call-and-response speech. “We will not work for you as long as you work for ExxonMobil. Our future is on fire and you are fanning the flames.”

Paul, Weiss recently helped ExxonMobil win a case brought by the New York district attorney alleging that the company misled investors about the costs of climate change to its business. The firm is also representing Exxon in a similar case in Massachusetts, as well as other climate cases brought by the cities of San Francisco and Oakland, California and Baltimore, Maryland. In those cases, the cities are seeking damages from multiple fossil fuel companies to pay for impacts of climate change they are already experiencing and to fund adaptation measures.

The action at the Yale reception went on for just over 10 minutes before the students pointedly filed out and left the reception. “I think it went well,” Tim Hirschel-Burns, one of the organizers, told Grist. “It is discouraging that the partners from Paul, Weiss continue to not take the climate crisis seriously, but law students certainly are, and I think they’re going to continue seeing that students are not going to accept their indifference.”

Now Harvard and Yale law students are working together to build momentum and start a larger movement. After Thursday’s protest, the coalition launched a #DropExxon pledge that asks law students around the country to refuse to interview with or work for Paul, Weiss until it drops ExxonMobil as its client. Organizers of the pledge said that students at other schools are planning additional protests.

In a press release, Yale students involved with the protest pointed out that Paul, Weiss claims that it does not “sacrifice culture and values in favor of the bottom line,” and that it has a commitment “to serve the broader public interest.” They argued that the firm cannot live up to these values while helping Exxon, citing investigative reporting that found that the company has known the dangers of climate change since the 1970s but chose to fund climate denial to protect its business.

Paul, Weiss did not respond to a request for comment on this story.

The movement raises questions about the role of lawyers in society and the right to equal representation before the law. In Harvard’s newspaper, the Crimson, Harvard student Andrew Liang wrote, “In providing such representation, Paul, Weiss is not defending climate change. It is defending the law. The legal profession does not exist to pass moral judgment on a client, but to uphold the process.”

Organizers at Yale told Grist that they are not disputing that people and companies deserve representation but said that doesn’t mean the firm does not have a choice in whom it represents. “Paul, Weiss has no shortage of paying clients to choose from, but is giving priority to a company that is sabotaging humanity’s chance to address climate change,” Yale Law School student Ify Chikezie said in a press release.

Charles Nesson, a professor at Harvard Law School, said that these are questions students need to think through as they move ahead in the profession. “A lot of students face this problem of going off into law firms and making money to pay off their student debts and finding that they’re doing work that may not be completely savory as far as the climate is concerned or justice is concerned,” said Nesson. “The amount of acceptance within the profession of legal tactics that produce unjust results is considerable.”

Nesson recently had students discuss the protest against Paul, Weiss in a class called Ideal Discourse. He said that most of his class approved of the protest, but brought up concerns about whether the action would be effective, whether it would hurt the protesters’ careers, and why they were targeting Paul, Weiss over other firms. In an online class discussion board for the class, one student wrote, “This discussion about how we square our principles with our professional roles is so important and for a lot of us, hard.”

Outside of the law schools, others in the Harvard and Yale communities made strides last week in their campaigns to get the two universities to divest their endowments from fossil fuel companies.

On Tuesday, Harvard’s Faculty of Arts and Sciences passed a motion, 179 to 20, to call on the Harvard Management Company, the school’s endowment gatekeepers, to divest from companies that “explore for or develop further reserves of fossil fuels.” An online petition started by a group called Harvard Faculty for Divestment now had almost 1,000 signatures as of Friday. While the faculty vote has no direct influence on the endowment, University President Lawrence Bacow said he would bring the motion to the school’s governing body for consideration.

The faculty vote follows another successful campaign by Harvard alumni to nominate five candidates who will support divestment for election to the Board of Overseers, which has the power to approve who is on the board that manages the school’s endowment.

At Yale, the undergraduate student government voted unanimously on January 25 to become a part of the Yale Endowment Justice Coalition and support the group’s mission to get the school to cancel its holdings in Puerto Rican debt and divest from fossil fuel companies.

Outside of the Ivy League, Georgetown University’s president announced on Thursday that the school’s board of directors has decided to divest its holdings in fossil fuel companies.