This story originally appeared in The Guardian and is republished here as part of Covering Climate Now, a global journalism collaboration strengthening coverage of the climate story.

School pupils, youth activists, and communities around the world have turned out for a day of climate strikes, intended to underscore the urgency of the climate crisis even in the midst of the coronavirus pandemic.

Social distancing and other COVID-19 control measures dampened the protests, but thousands of activists posted on social media and took to the streets to protest against the lack of climate action from world leaders. Strikes were scheduled in at least 3,500 locations around the globe.

Friday’s strikes — some in the form of mostly socially distanced physical marches on the streets, and some purely online meetings — were on a smaller scale and far more subdued than last year’s September week of action, in which at least 6 million people around the world were estimated to have taken part.

Greta Thunberg led a strike in Sweden, which was limited to 50 people by the country’s lockdown laws — “so we adapt,” she tweeted, with a picture showing strikers more than 6 feet apart. The day of action also marked the 110th week of her own school strike, which began in August 2018.

School strike week 110.
Today is our global day of climate action, and we strike in over 3100 places!
In Sweden gatherings over 50 people are not allowed due to COVID-19, so we adapt.#climatestrike #fridaysforfuture #schoolstrike4climate #FaceTheClimateEmergency pic.twitter.com/aQqyKgBYIb

“Fridays For Future and the youth climate movement are striking again around the world, in a safe way and following COVID-19 guidelines, to demand those in power treat this like the urgent crisis it is,” she said.

One innovation brought on by COVID restrictions was a 24-hour Zoom call, featuring people from across the world speaking about the issues in their region, interspersed with activism-related activities for callers.

Fridays for Future, the global youth movement that coalesced after Thunberg’s pioneering strike, said demonstrations were planned in at least 150 countries.

Protesters gathered on the lawns of Australia’s parliament in Canberra, with posters calling on politicians to “fund our future — not gas,” and recalling the catastrophic bushfires that raged through the region earlier this year.

In the Philippines, marchers and banners linked the strike to concerns over terror laws being used to outlaw protests, and to the plight of developing countries ignored by the rich world. Mitzi Jonelle Tan, an activist, said: “We Filipinos are among the most impacted, ranking second in the latest global climate risk index, yet our contributions to greenhouse gas emissions are so little. The least affected are often those who have contributed the most to the climate crisis — and what are they doing now? Nothing. It is time for world leaders to wake up to the truth of the climate crisis.” 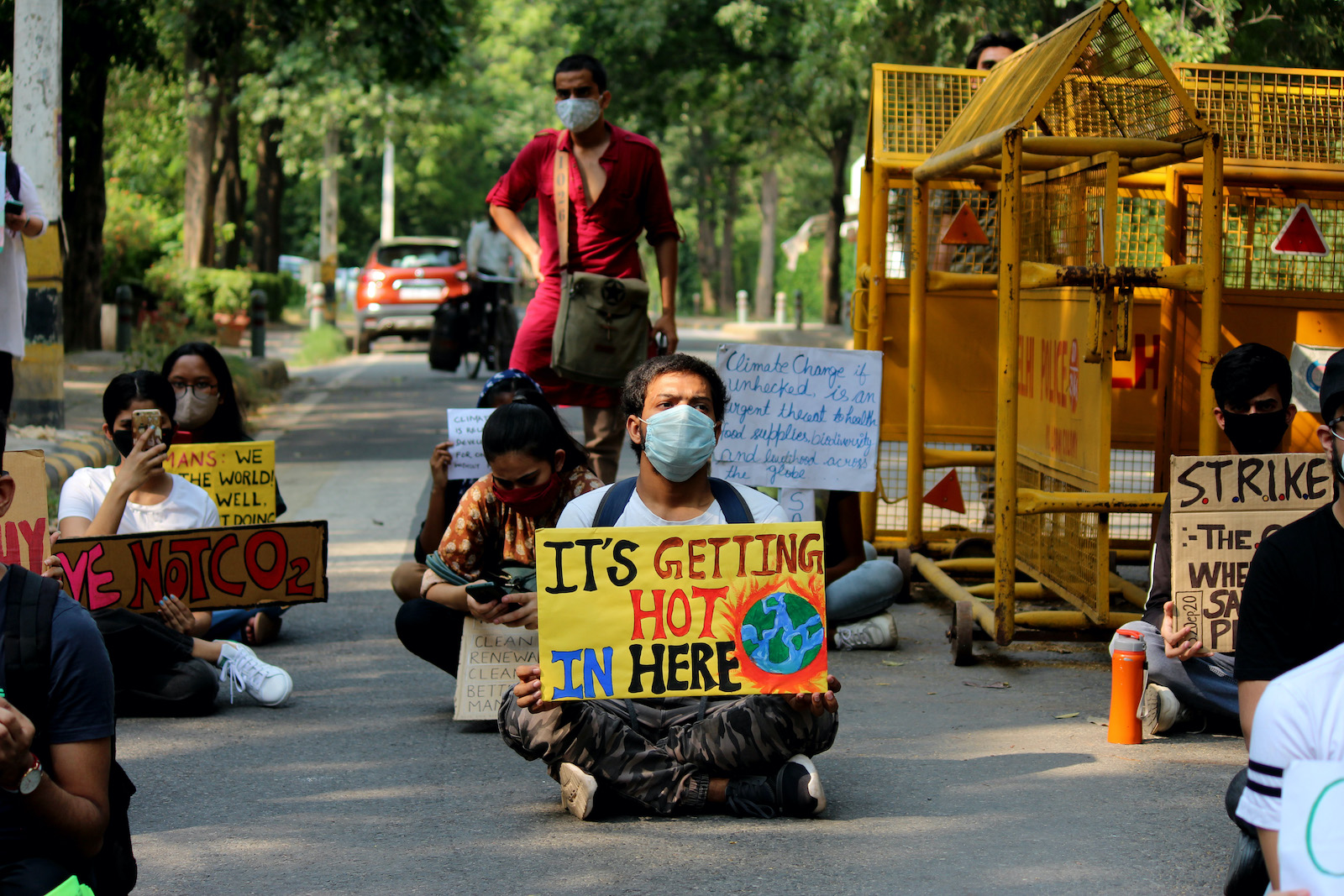 There were strikes and protests in major cities in India, with placards complaining that “it’s getting hot in here,” reflecting predictions that hundreds of thousands of people could die each year from heat waves in India in coming decades, if global heating continues to rise at current rates.

“Countries like India are already experiencing a climate crisis,” said the activist Disha A Ravi. “We are not just fighting for our future, we are fighting for our present. We, the people from the most affected are going to change the conversation in climate negotiations and lead a just recovery plan that benefits people and not the pockets of our government.”

Strikes in Bangladesh drew attention to the threat to the country from rising sea levels, as tens of thousands of people are already refugees after their homes were inundated.

Hundreds of people marched through Pretoria, in South Africa, calling for the government to declare a climate emergency. Across Africa, protesters gathered in the streets and on the steps of public buildings to call for political action. Hilda Flavia Nakabuye, a Fridays for Future activist in Uganda, contrasted the action taken to control the coronavirus with the far weaker progress on the climate.

“In order to fight the COVID-19 pandemic, governments have taken strong and bold measures, pulling on the brakes, deciding on a long lockdown. We’ve stopped striking temporarily — but we know that the only way we can contain climate change is by our actions. That’s why we are striking again today, and will keep on mobilizing in the future,” she said.

The most northerly strike was at the edge of the Arctic ice, north of the Norwegian archipelago of Svalbard, where Mya-Rose Craig, an 18-year-old ornithologist known as Birdgirl, was with the Greenpeace ship Arctic Sunrise.

“I’m here because I want to see for myself what’s at stake as this crucial protector of the planet, the Arctic Ocean, melts away at a terrifying rate,” she said. “Fridays for Future activists from all over the world are standing up to call for urgent action against climate breakdown.”

Earlier this week, scientists confirmed that this year’s Arctic sea ice minimum was the second smallest in the last 40 years of continuous records.

World leaders have been meeting online this week, and a few in person in New York, at the U.N. general assembly, which has for the first time taken the form of a virtual event.

China surprised the rest of the world by announcing a new goal to become carbon neutral by 2060, and to cause its greenhouse gas emissions to peak and then decline before 2030. The Climate Action Tracker think tank estimated that the commitments, if followed through, would reduce global temperature rises by between 0.2 and 0.3 degrees Celsius (0.32 to 0.54 degrees Fahrenheit).

Ahead of the assembly meeting, the E.U. also announced a strengthened target, of cutting greenhouse gases by 55 percent compared with 1990 levels by 2030. That would be the strongest commitment of any major economy, though green campaigners pointed out that the new target was looser than the old as it takes into account the impact of increasing carbon sinks such as forests.

The United States, the world’s second biggest emitter, is scheduled to withdraw from the Paris Agreement this year, and under a second term with Donald Trump as president would hold to that timetable. The Democratic candidate, Joe Biden, has pledged to rejoin.

The U.K., which is to host the next U.N. climate summit — called COP26 — in November 2021, has also stepped up its diplomatic push. The prime minister, Boris Johnson, and the U.N. secretary general, António Guterres, will convene an interim summit of the world leaders from major economies this December, on the fifth anniversary of the Paris Agreement.

At that interim meeting, all countries will be expected to come forward with their national plans — called nationally determined contributions, or NDCs, in the U.N. jargon — to strengthen their carbon-cutting efforts, as required under the 2015 accord. Current commitments would result in temperature rises of 3 degrees Celsius (5.4 degrees Fahrenheit), which would wreak devastation and extreme weather over swathes of the globe.

Youth activists in the Fridays for Future movement are planning their own mock COP26 conference this November, when COP26 was originally scheduled before its delay owing to coronavirus. School strikers from around the world want to contrast the urgency they feel with the slow progress in international forums.