When Supreme Court Justice Ruth Bader Ginsburg passed away a week ago, commentators were quick to lament the implications of her empty Supreme Court seat for abortion rights and gender equality. But there’s another concern: our overheating planet.

On Saturday, Trump is expected to nominate Seventh Circuit Judge Amy Coney Barrett for Ginsburg’s old spot. And some worry that a 6-3 conservative supermajority might mean that any policy to protect our planet from climate change will be struck down — before it even gets started.

To state the obvious, a SCOTUS with a 6-3 conservative majority is going to strike down federal climate legislation of any ambition. It will probably also undercut several precedents that support *current* environmental laws & regulations.

“Environmentalists are facing a real minefield ahead,” said Robert Percival, director of the environmental law program at the University of Maryland. “I have just been so depressed.”

First, some facts: The Supreme Court can’t just go around striking down legislation and a president’s executive orders left and right, but the court can make it much more difficult to implement laws or limit greenhouse gas emissions — by interpreting law narrowly, refusing to defer to agencies like the Environmental Protection Agency, and otherwise restricting presidential and Congressional power. And now, with the potential for more conservative justices on the court than anytime in recent history, the odds that government actions survive Supreme Court scrutiny appear lower than ever.

Barrett is a staunch conservative and and popular on the religious right. Not much is known about her environmental record, but if she follows in the footsteps of Trump’s earlier appointments, she would join the conservative wing of the court in undermining existing environmental laws and blocking others.

Here are two ways a super-conservative court with Barrett could sideline climate progress. And one potential path to success.

No standing in court

One of the most important issues in environmental law is whether groups — cities, states, and even young children — have the right to sue the government to take action on climate change. To have “standing” to sue, plaintiffs have to be able to prove a) that they have suffered some sort of harm; b) that injury is traceable to the action (or inaction) of the defendant; and c) that the result of the lawsuit would somehow rectify the damage done.

That poses a few problems for taking on the giant, global problem of climate change. A court tilted so far to the right might say that since climate change affects everyone, and global CO2 emissions are hard to track and trace to particular defendants, a single state or city doesn’t have standing to sue. Moreover, since no single action can truly “solve” climate change, conservative justices could argue that any lawsuit wouldn’t rectify the harm caused — again, demolishing plaintiffs’ standing.

Some justices on the court, like John Roberts and Clarence Thomas, are already skeptical of whether groups have the right to sue the government over climate change. In Massachusetts v. EPA, a 2007 Supreme Court case in which 12 states and several cities called on the agency to regulate greenhouse gas emissions, a 5-4 majority found that the plaintiffs did have standing — but only one of the justices in that majority is still serving on the court. Chief Justice John Roberts, currently the Court’s swing vote, wrote a scathing dissent, arguing that global warming was “harmful to humanity at large” and that EPA regulation of greenhouse gases was unlikely to make a dent in the problem. 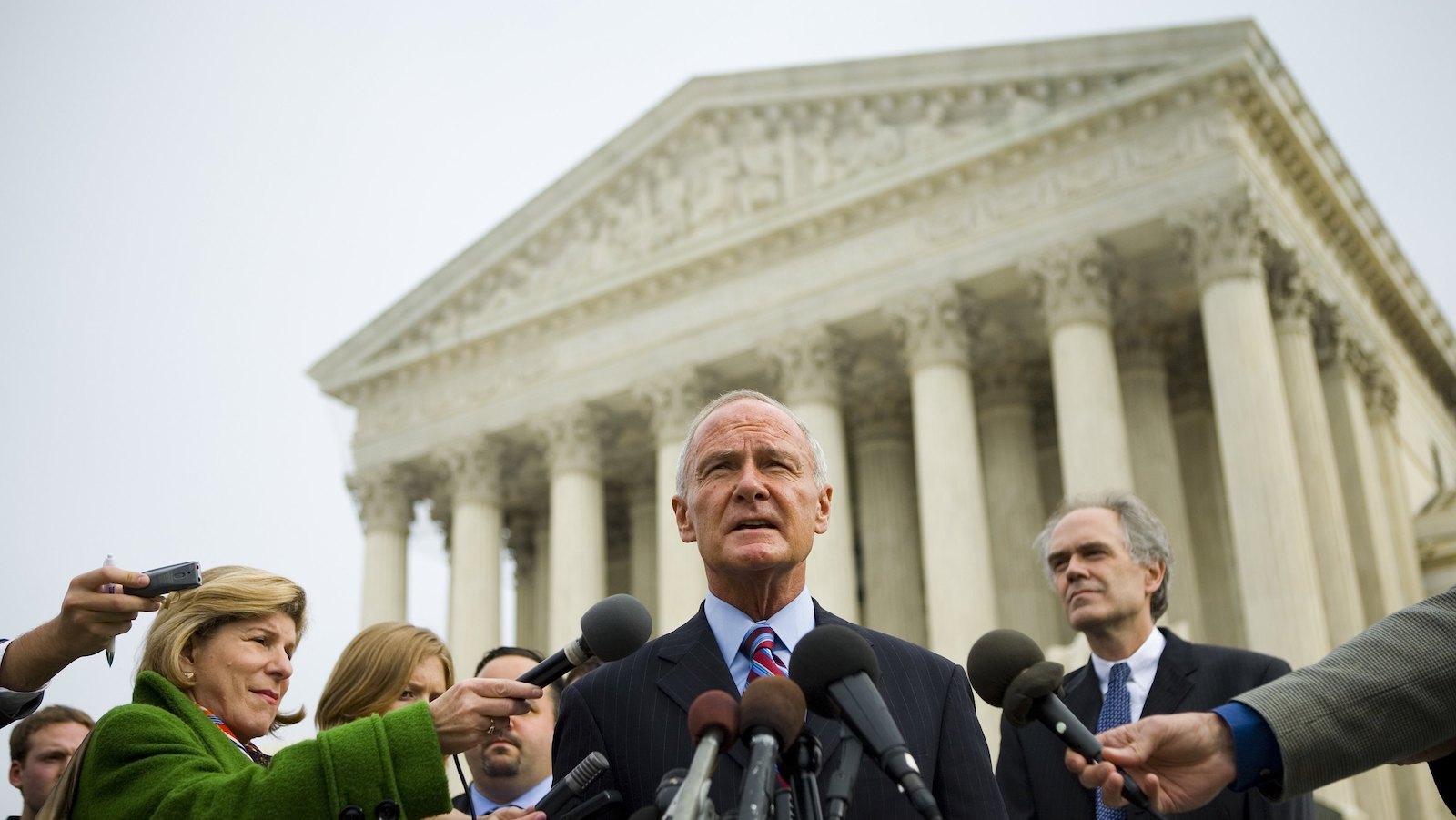 If Barrett and other conservative justices follow in Roberts’ footsteps, the outcome could be catastrophic. “Litigation brought by states and by environmental groups is very important — for instance, in holding Trump’s feet to the fire,” said Michael Gerrard, a professor of law at Columbia University. If these groups don’t have the right to sue, then a hostile White House could gut more environmental laws and continue to ignore climate change — with nothing standing in its way.

Back in 2014, foiled by Congress in his attempts to pass a sweeping climate change law, President Barack Obama turned to the EPA. The agency proposed the Clean Power Plan, which would have cut greenhouse gas emissions from the country’s power plants by 30 percent in 15 years.

It should have worked: The EPA’s right to regulate greenhouse gas emissions had been confirmed in Massachusetts v. EPA. But the Clean Power Plan got held up in the courts, as over two dozen (mostly red) states sued to block it. The Supreme Court, in a highly unusual move, supported those states — halting the enforcement of the plan while the lawsuit worked its way through the courts, and effectively hamstringing the regulation until the end of President Obama’s term. (President Trump later replaced the rule entirely.)

A super-conservative court with Barrett on board would likely give any executive action to take on climate change similar treatment, ruling that large-scale regulations on greenhouse gas emissions is a step too far under the EPA’s authority. That could pose a huge problem for the Democrat’s presidential nominee, Joe Biden, who has promised to make the climate a centerpiece of his term if elected. Biden has pledged to get America’s electricity grid running purely on clean energy by 2035 — basically triple the ambition of Obama’s plan. If Democrats don’t take control of the Senate (a toss-up at the moment), he would have to try to muscle regulation through the EPA. And that probably wouldn’t end well.

It’s up to Congress

There’s at least one path to sweeping, Green New Deal-esque climate action. The best-case scenario for climate action starts with Congress actually passing a bill, Gerrard said. “Most of the litigation about climate change law that gets to the Supreme Court is on interpreting ambiguous statutes,” he said. But if Congress and the president adopt climate legislation — and leave little room for interpretation — that won’t leave much space for the Supreme Court to strike it down.

Even that comes with caveats. According to Percival there’s a growing movement among conservative justices for expanding what is known as the “non-delegation doctrine,” in which laws can be struck down if they seem to hand too much power to executive agencies. That means that if, say, Congress passes a law regulating greenhouse gas emissions — but leaves it up to the EPA to parse out some of the details — the court could quash it. “You could see the court basically striking down some major environmental statutes,” Percival said.

So if the Biden administration gets a clean energy law through Congress, it would have to be extremely detailed and avoid leaving too much for agencies to decide; otherwise, it likely wouldn’t survive a challenge that winds up in front of the Supreme Court.

Gerrard is still hopeful that, given the right conditions, legislation that passes the Senate and the House could hold up even under superconservative court scrutiny. “If the laws are clear and unambiguous and specific enough,” he said, “Congress ties the hands of the courts.”

This story has been corrected to reflect the fact that only one of the justices in the majority of Massachusetts v. EPA is still on the Supreme Court.