Donald Trump, Kanye West, and a weird western bird are all somehow involved in a major conservation battle 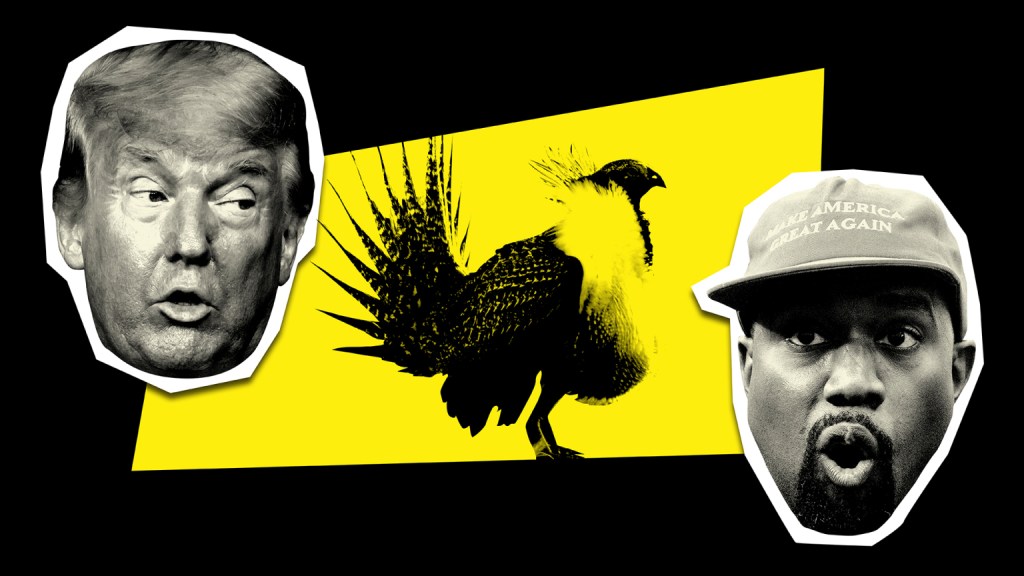 Donald Trump, Kanye West, and a weird western bird are all somehow involved in a major conservation battle

The greater sage-grouse has a very hard life. Aside from facing predators like foxes, bobcats, and coyotes, the ground-dwelling western bird is also threatened by oil and gas development, miners, ranchers, hunters, climate change, invasive grasses, and, now, Kanye West.

This spring the rapper and presidential hopeful, who purchased a sprawling ranch in Cody, Wyoming, in 2019, got the go-ahead to expand development on the property, which happens to be situated in key sage-grouse habitat. And while West isn’t likely to single-handedly wipe out the sage-grouse with a few (albeit big) ranch upgrades, the episode illustrates how a lack of protection under the Trump administration — which has aggressively sought to dismantle safeguards for the species — has further threatened the already vulnerable bird.

According to permits shared with Mother Jones by officials from Park County, Wyoming, and as first reported by TMZ last month, West plans to add to his ranch several new structures: a two-bedroom lake house; two underground, 10,000 square-foot parking garages; and a 10-bedroom, 52,000 square-foot residence, which coincidentally would be about the size of the White House. (Park County is also where West is reportedly registered to vote, as a Republican.) West had originally hoped to construct an underground “meditation structure” on the property, according to previous reports, though it’s unclear if a facility of the sort will be incorporated into his new plans. (Mother Jones attempted to contact West’s representatives through an email address listed on the latest permits. We did not hear back.)

But it turns out the proposed construction, and the entirety of West’s ranch, fall in “core” sage-grouse habitat, area designated by the state as important for the bird’s survival — and for the health of the larger sagebrush ecosystem, the largest interconnected habitat in America. Although the bird is known for its stunning, jiggly mating dance, the sage-grouse isn’t just a pretty face: As an “indicator species,” it serves as a proxy for the wellbeing of more than 350 other species that share its habitat. It’s seen its population decline from as many as 16 million birds at historic levels to somewhere between 100,000 and 500,000 individuals in recent years, thanks in large part to human activity like road construction, oil and gas development, and coal mining.

To conserve the species, back in 2015 the Obama administration approved a bipartisan agreement — imagine that! — that required cooperation between 11 western states and the federal government. The plan aimed to prioritize development outside key sagebrush habitat areas and keep the bird from requiring listing under the Endangered Species Act. All told, it was the largest conservation effort in U.S. history, costing more than $45 million in funding. The deal was a massive experiment to see if environmentalists, ranchers, and energy industry groups could work together to prevent the species’ further decline, explains Brian Rutledge, director of the National Audubon Society’s Sagebrush Ecosystem Initiative, who helped craft the 2015 agreement: “The idea was, and the agreement was, that in 2020, we would review our progress, review our hypothesis, and see if it had held true.”

When the Trump administration took over, the agreement essentially went out the window. “This administration came in,” Rutledge says, “and they hijacked the process — that’s the terminology I use, not the states — and said, ‘your hypothesis has become our conclusion.’”

“Without data, without support,” he says, the Trump administration declared that the sage-grouse didn’t need further protection — a contentious decision I reported on back in 2018. “The blueprint they’re adopting is basically a wish list for industry,” Bobby McEnaney, then the senior deputy director for the Western Renewable Energy Project at the Natural Resources Defense Council, told me at the time. “There’s no biology or science to support it.” By March of 2019, the federal government, which owns about half of the land designated as important sage-grouse habitat, was handing out oil and gas leases in those areas at a rate nearly 3 times higher than it had in the last 15 months of the Obama administration, according to analysis funded by the National Audubon Society, the Wilderness Society, and the National Wildlife Federation. Environmental groups promptly sued over the leases, and later won; “nonetheless, [the Trump administration is] threatening to offer some of the leases up for sale again,” Rutledge says.

At the same time, the administration has gutted protections for endangered and threatened species across the board, guaranteeing that if the sage-grouse ever did get listed under the act, its protections would be seriously weakened. And, according to Jayson O’Neill, director of Western Values Project, a conservation group focused on the West, federal officials stopped tracking and regulating other kinds of land development in sage-grouse habitat, like extensive ranch expansion projects proposed by billionaire musicians.

“By saying, ‘We’re no longer going to honor that agreement, that handshake,’ the Trump administration just gave the signal to all the other governments, associations, oil and gas, it’s the Wild West again,” says O’Neill. With the lack of federal oversight, he says, projects like West’s put the sage-grouse’s habitat at risk of becoming even more fragmented. Under state regulations, according to reporting in December by local news outlet the Cody Enterprise, West’s ranch expansion required a sage-grouse “density and disturbance” analysis before permit approval, but it unclear what the review found. (Mother Jones has submitted a public records request for the analysis.)

“When we make those one-off decisions without looking at the holistic picture of the habitat degradation, it’s slowly and surely death by a thousand cuts for this species and the 350 other species in that habitat,” O’Neill notes. And, as he points out, West isn’t the only landowner who has potentially benefitted from Trump’s lack of regulation: Other notable ranch owners include RuPaul, who has leased parts of their land to oil and gas interests, and Karen Budd-Falen, a Trump administration official who worked to roll back Endangered Species Act protections while owning and operating “hundreds of thousands of acres overlapping prime sage-grouse habitat,” according to Western Values Project, presenting a clear conflict of interest.

The loss of this key land, Rutledge warns, might not just spell disaster for the critters that inhabit it. “If you ever drive across sagebrush in the springtime, every sage bush and every stand of sagebrush has a berm of snow that engulfs it and surrounds it.” Without the sagebrush, he says, the snow “blows to the nearest exit,” and we are left with “one gigantic high desert.”

“So this is not just about a quaint bird,” he says. “This is about the very survival of an ecosystem and the non-desertification of Western North America.”