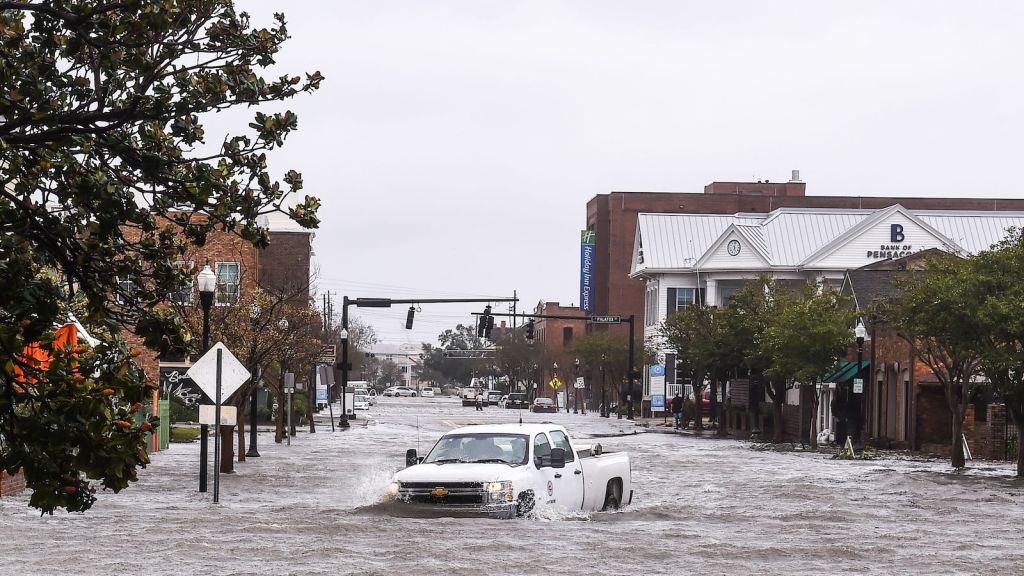 Hurricane Sally left a trail of chaos and damage on the U.S. Gulf coast on Wednesday, with pounding rain and winds whipping above 100 mph as the huge Category 2 storm system ground ashore at just 2 mph — a turtle’s walking pace.

It later accelerated to 3 mph and then 5 mph as it battered the metropolitan areas of Pensacola, Florida, and Mobile, Alabama, encompassing nearly a million people.

It cast boats on to land or sank them at the dock, flattened palm trees, peeled away roofs, blew down signs, and knocked out power to more than a half-million homes and businesses. A replica of Christopher Columbus’ ship the Niña that had been docked at the Pensacola waterfront was missing, police said.

Sally tore loose a barge-mounted construction crane, which then smashed into the new Three Mile Bridge over Pensacola Bay, causing a section of the year-old span to collapse, authorities said. The storm also ripped away a large section of a fishing pier at Alabama’s Gulf state park on the very day a ribbon-cutting had been scheduled following a $2.4 million renovation.

By the afternoon, authorities in Escambia county said at least 377 people had been rescued from flooded areas. More than 40 people trapped by high water were brought to safety within an hour, including a family of four found in a tree, Sheriff David Morgan said.

Authorities in Pensacola said 200 national guard members would arrive on Thursday to help. Officials also announced a three-day dusk-to-dawn curfew in the county, where the storm turned some Pensacola streets into white-capped rivers for a time.

In downtown Pensacola, water rushed down some streets like river rapids, forming whitecaps as it slapped against buildings and rose above the tires on cars.

Before sunrise, water was up to the doors of Jordan Muse’s car outside the Pensacola hotel where her family took shelter after fleeing their mobile home.

The power failed early in the morning, making it too stuffy to sleep. Her 8-year-old son played with toys underneath the hotel room desk as Muse peered out the window, watching rain fly by in sheets.

“The power trucks are the only ones above water, and they’re the biggest, Muse said, adding: “I can’t believe it got so bad.”

Michele Lamar-Acuff woke to the thud of a small tree falling against a window of her Pensacola home. Waist-deep water gushed down her street. Above the loud whistling of the wind, she heard what sounded like transformers exploding.

“I don’t feel safe to leave,” Lamar-Acuff said from the porch of a neighbor’s house. “I’m just staying put and hoping for the best.”

Sally also tore away a large section of a newly renovated fishing pier at Alabama’s Gulf state park and knocked out power to more than a half-million homes and businesses across the region.

By early afternoon, Sally had weakened into a tropical storm, with winds down to 70 mph, but the worst may be yet come, with heavy rain expected into Thursday as the storm pushes inland over Alabama and into Georgia.

Like the wildfires raging on the West Coast, the onslaught of hurricanes this season has once again focused attention on climate change, which scientists say is causing slower, rainier, more powerful, and more destructive storms.

The storm pushed a surge of ocean water on to the coast. In Mobile Bay, just next to Gulf Shores, five rivers drain into the inlet and the authorities were warning of a potentially devastating flooding situation to come.

Roofs were ripped off houses, allowing the still-heavy rain directly into homes where people were trying to hunker down all day on Wednesday.

In daylight hours on Wednesday, the water was swamping homes and trapping some people in high water.

“It’s not common that you start measuring rainfall in feet,” said a National Weather Service forecaster, David Eversole, in Mobile.

It was the second hurricane to hit the Gulf coast in less than three weeks and the latest blow in one of the busiest hurricane seasons ever recorded.

At the start of the week, Sally was one of a record-tying five storms churning simultaneously in the Atlantic, strung out like charms on a bracelet.