As the first round of coronavirus lockdowns swept the country last spring and Americans adapted to a new normal of online shopping, glove- and mask- wearing, and contactless delivery, Emily Rodia tabled her plan to open a low-waste store where consumers could bring their own reusable containers to purchase an array of household goods.

“In April we were like, ‘Well, I think it might be a few years before we actually do this idea, just because single-use plastic is kind of necessary in the COVID environment,” she said.

But as Rodia and her fiancé, Jason Rusnock, spent the next few months cooped up in their South Philadelphia apartment, their thinking started to change. They had more free time to plan the business; the space they were hoping to rent dropped in price. As the city struggled to keep up with all of the extra trash residents were creating at home, garbage started piling up in the streets. The very problem the couple wanted to help address with their business was becoming much more visible to everyone. The idea behind the low-waste or zero-waste movement is not just to prevent trash from piling up in landfills and polluting the environment, but also to usher in a wholesale shift away from disposable products and toward things that can be used, repaired, and reused for a long time, in order to use fewer resources overall and reduce our climate impact.

Ultimately, Rodia and Rusnock decided that despite the difficult economic environment, Philly was ready for a low-waste store. That store, Good Buy Supply, opened at the end of November, and so far, Rodia says business has been better than she expected.

“There’s a lot of new people that never knew about low waste or zero waste coming in to really learn about how to do small changes,” Rodia said. “So it’s super exciting.”

Rodia and Rusnock aren’t the only eco-minded entrepreneurs who are getting more people excited about reducing their waste during a pandemic that has fueled a proliferation of single-use plastics, including personal protective equipment such as masks and gloves as well as plastic grocery bags, cutlery, containers, and packaging. Despite early fears that reusable containers could be a vector for disease — fears that plastic industry lobbyists helped stoke — public concern over the environmental impacts of our trash hasn’t gone away. If anything, the widely reported uptick in plastic garbage during the pandemic could give the zero-waste movement a boost.

“I was told personally, very early on in March and February, that this is a time where people are going to be focused on just the pandemic and they don’t care about sustainability,” said Zuleyka Strasner, the founder of San Francisco-based ZeroGrocery, a plastic-free online grocery store. “And we’ve seen the absolute opposite.”

Members, who pay a $25 monthly fee for deliveries and discounted grocery prices, return jars to ZeroGrocery to clean and reuse after they’re finished with them. By cutting out middlemen like the grocery store, the company has been able to streamline its supply chain; as a result, ZeroGrocery didn’t face many of the product shortages that larger brick-and-mortar businesses did when the pandemic hit.

That meant that when the Bay Area first went into lockdown in March and demand for online grocery services shot through the stratosphere, ZeroGrocery was able to keep up. In early February, Strasner said, the company had fewer than 100 customers. Today, it has thousands. Strasner says that by February, she expects the company’s customer base will have grown fortyfold from the same time last year.

“It’s a very sad situation, but we were called to action,” Strasner said. This month, the company is expanding its services to Los Angeles, and it eventually hopes to move into other cities around the country.

Strasner says that early on in the pandemic, ZeroGrocery received some questions from customers concerning the safety of reusable containers. But after referring customers to the business’s COVID-19 guidelines, which detailed strict sanitation protocols, people “quickly grew comfortable” with the idea, Strasner says. She believes her company’s frequently washed reusable jars are cleaner than many of the disposable containers people receive from other online delivery services, which often get touched and picked up by multiple individuals before reaching their destination.

While the Centers for Disease Control initially steered businesses away from reusables as a safety precaution, many experts have since come to the same conclusion Strasner has: Reusables are doable. In June 2020, more than 125 health professionals from 18 countries signed a statement affirming that reusable systems “can be used safely by employing basic hygiene” and that single-use plastics aren’t inherently safer. 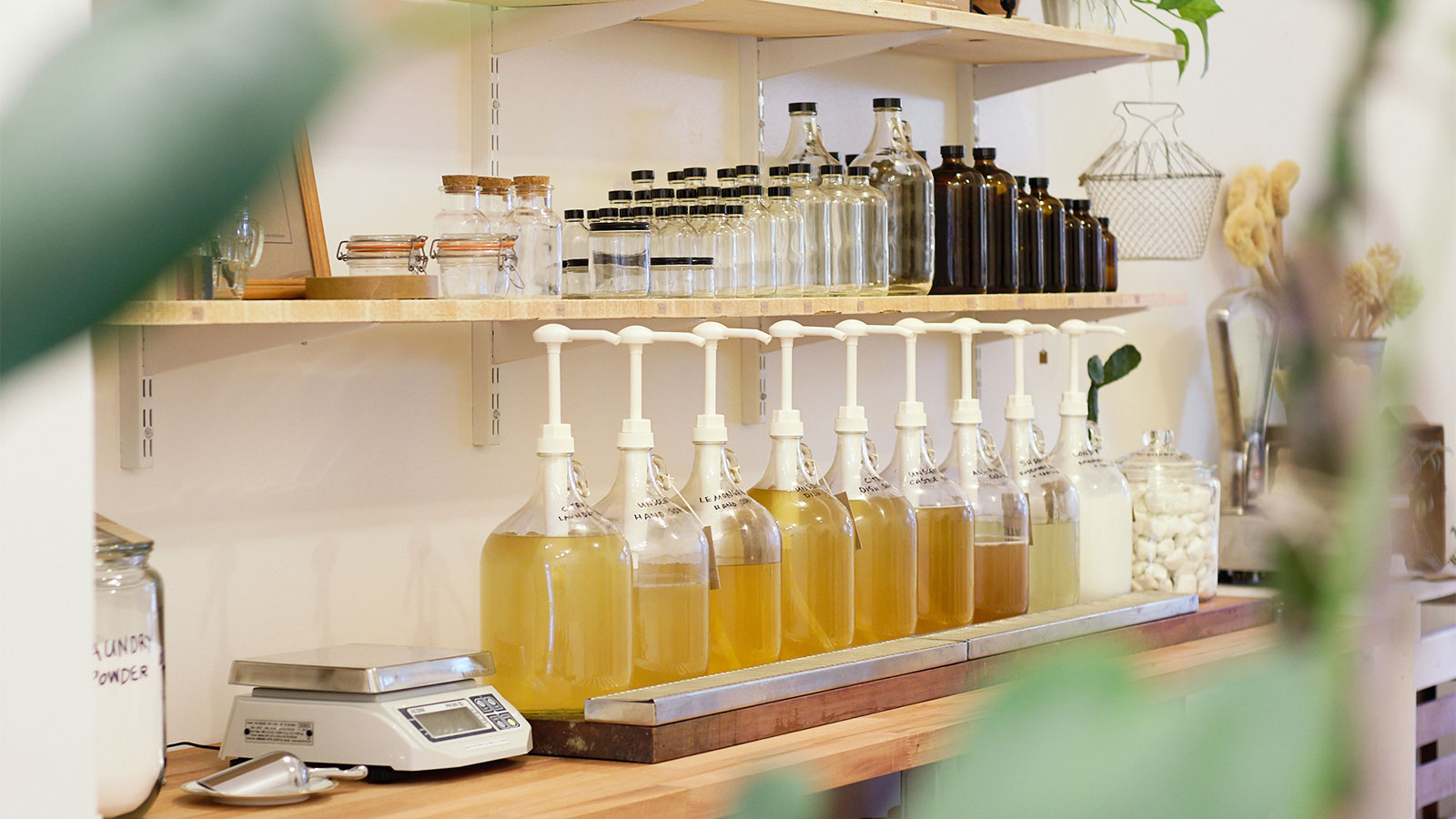 Jennifer Jeffrey hasn’t had any customers voice concerns over reusable container hygiene. Her Elgin, Oklahoma–based store, Re: Earth Refill Shop, allows people to bring their own containers, or purchase a reusable container in the shop, to buy personal care, pet care, and household cleaning supplies, all sourced from small businesses, in bulk. As the first dedicated “refillery” in the state of Oklahoma when the store opened in July, the bigger challenge, she says, was introducing residents to a new way of shopping.

Jeffrey says that while business was “not that great” at first, with most folks staying home and doing more online ordering, it’s been steadily picking up, and she is starting to cultivate a loyal customer base, including people who come in from out of the area. “It’s still slow going,” she said, “but it’s enough. And I want people to be able to have this service as an option, as opposed to filling their homes with wasteful products.”

Even for businesses that strive to generate as little waste as possible, some additional trash has been unavoidable in the pandemic. ZeroGrocery delivery drivers, for instance, are required to use disposable nitrile gloves for each delivery. At Good Buy Supply in Philly, the biggest source of waste is the cardboard boxes that products arrive in from vendors. While all of that cardboard can be put on the curb for recycling, Rodia worries that it may not get properly recycled, given the city’s recent waste management troubles, so she’s been trying to give it away to people who need boxes for moving.

Kristian Henderson runs BLK+GRN, an online personal care marketplace for products from Black-owned suppliers that meet strict health and environmental standards. Henderson says she tries to work with vendors who use as little plastic as possible and only to ship customers’ orders once every item has arrived in order to minimize waste. But during the pandemic, it’s been more difficult to live up to these ideals.

“I’ve had artisans say, ‘I’ve had to change my bottles, I can’t get my same glass so I had to go to plastic,’” she said. With some suppliers facing ingredient or container shortages, the company has had to do more partial fulfillment orders, “which is completely against what our brand does, but that’s something we had to do,” Henderson said.

The zero-waste movement seems like it’s becoming “a little more compassionate toward people that can’t do everything” during the pandemic, says Laura Markley, a Ph.D. candidate at Syracuse University who studies the life cycle impacts of plastic and runs WasteFreePhD, a website focused on sustainability science.*

“That’s good in a way, because I think it can get very intense, focusing very intensely on individual action,” Markley said. “I think there’s been broadly a shift toward how there’s systemic issues with waste management, and how we also need to take care of that.”

Moving forward, Markley hopes to see a continued shift away from zero-waste orthodoxy and toward more holistic thinking about the myriad impacts of the products we consume. For instance, use of plastic packaging can help keep food fresh longer and reduce food waste, which has a significant climate impact — a reality that needs to be balanced with efforts to reduce plastic pollution. And reducing our consumption of new products tends to have a much greater environmental impact than reducing waste, which is why Markley emphasizes the importance of being mindful not to buy things just because they’re marketed as eco-friendly, but because we know we will use them.

In our current world, it’s impossible to live a true zero-waste lifestyle. But if COVID-19 has reminded us of anything, it’s that our actions do matter for our own personal health, as well as the health of our neighbors and the environment. And if enough of us take small steps to reduce our impact, we can make the post-pandemic world a less trashy place.

The next big climate PR campaign: abolish the filibuster