Joe Biden has been president for six days, and his administration has already begun the arduous process of unraveling former president Trump’s environmental legacy. Last week, Biden signed executive orders revoking key permits for the Keystone XL pipeline, banning drilling in some parts of the Arctic, and initiating the month-long process of rejoining the Paris Agreement — all pieces of President Obama’s climate legacy that Trump undid during his presidency. Biden is expected to unveil more climate-related decrees this week.

But the president has a long way to go if he wants to make good on the $2 trillion climate plan he introduced on the campaign trail. And, most crucially, he’ll need the Senate, which is now controlled by Democrats by a razor-thin margin, to help him do it.

Climate groups are spending big bucks to put pressure on Biden and congressional Democrats to deliver on climate.

On Sunday, a campaign called Fix Our Senate placed a full-page ad in the New York Times that calls on Senate Democrats to eliminate the filibuster. “Americans just voted to put Democrats in charge of the Senate,” it reads. “Are Senator Schumer and Senate Democrats going to let Mitch McConnell keep running the show?” The ad includes a phone number for Senate Majority Leader Chuck Schumer. Fix Our Senate and a coalition of progressive groups that includes the climate-focused groups Sunrise Movement and Evergreen Action, placed the ad as part of a national campaign to “raise awareness of how the filibuster allows Sen. McConnell to maintain his power from the minority and prevent popular legislation from becoming law,” Fix Our Senate said in a statement. 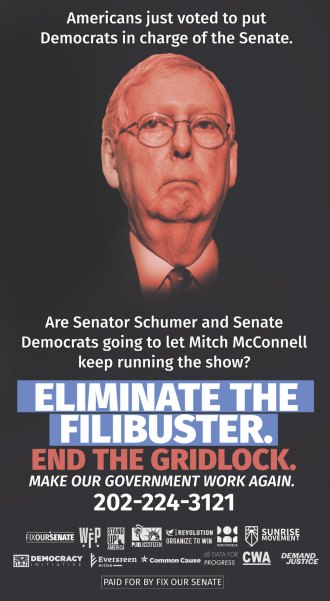 The filibuster — an arcane Senate rule that allows the minority party to prevent almost any piece of legislation from passing through the chamber without a supermajority of 60 votes — has emerged as a make-or-break issue for Democrats. The Senate is currently split down the middle, with 50 Democrats and 50 Republicans. Democrats have a de facto majority, however, because Vice President Kamala Harris gets to cast tie-breaking votes on bills. That means Democrats could vote to eliminate the filibuster — such a vote only requires a simple majority: 51 votes. But Senate Minority Leader Mitch McConnell, recognizing the threat filibuster reform poses to Republicans’ agenda, tried to get Democratic leadership to agree to take filibuster reform off the table entirely by filibustering the organizing resolution, the power-sharing agreement between the two parties that allows the Senate to begin conducting its business. Talks between McConnell and Schumer stalled as a result, leaving the Senate in limbo. On Monday, McConnell finally dropped his demand, allowing the Senate to get to work.

He’s taking a calculated risk. Democrats don’t have the votes they need to eliminate the filibuster anyway. Moderate members of the party like Senators Joe Manchin of West Virginia and Kyrsten Sinema of Arizona have said they won’t abolish it. Climate groups, like the ones behind the New York Times ad, say abolishing the filibuster is the only way Congress will be able to pass sweeping climate legislation.

“Climate progress has been stopped for more than a decade because of the filibuster,” Jared Leopold, a cofounder of Evergreen Action, told Grist. “We can’t afford to sit around and wait for Senate procedure to make progress on climate.”

Also in Sunday’s New York Times, a full-page ad from Climate Power 2020, a climate messaging project launched last spring by a trio of major progressive political organizations — the Center for American Progress Action Fund, the Sierra Club, and the League of Conservation Voters — calls on Biden to be remembered as the “climate president.”

“It is almost impossible to be thinking about a way forward from where we are without recognizing how flatfooted and ill prepared we were for this pandemic,” Abdul El-Sayed, former health director for the city of Detroit and one of the 153 signees, told Grist. “Climate change is barreling toward us and could pose circumstances that are even more challenging and devastating than COVID-19 has been, which is hard to imagine.”