With the Doomsday Clock ticking closer to midnight, “existential” is becoming the word of our times, encompassing a wide variety of apocalyptic anxieties. Especially those surrounding climate change.

During last week’s Democratic debate in South Carolina, climate change barely got a hearing, but Bernie Sanders did manage to call it an “existential threat.” It’s been a near constant when the subject of our overheating planet pops up. Elizabeth Warren, Joe Biden, and the now-departed Pete Buttigieg have also dangled the phrase in front of the Democratic electorate, pledging that their plans will help avert catastrophe.

It’s not only presidential hopefuls invoking such alarming terms — so are mass media outlets, Nancy Pelosi, and the United Nations secretary-general, Antonio Guterres. So why is everybody suddenly sounding like chain-smoking French philosophers from the last century? What exactly is an existential threat, anyway? And should climate change be considered one?

For researchers and futurists who spend their time thinking about global pandemics (like the increasingly scary coronavirus), the rise of super-powerful artificial intelligence, and nuclear fallout, an existential threat is something that does more than just end life as we know it. It ends human life.

“The archetype of an existential risk is human extinction,” said Simon Beard, a researcher at the Center for the Study of Existential Risk at the University of Cambridge. “So literally all the humans dying.”

But it’s not clear that everyone who drops the phrase “existential threat” is talking about human extinction. According to a wildly unscientific Twitter poll Grist conducted, only about half of some 240 respondents said that calling climate change an existential threat meant that humans could be totally wiped off the planet. On the other hand, a quarter said it meant that it’ll change how we live, the manner in which we exist. A smaller yet sizable chunk thought it was simply a buzzword to show that the speaker took the crisis seriously — perhaps a modern-day iteration of the Democratic standby, “I believe in climate change.”

And these different interpretations of what an existential threat is can result in serious miscommunication. For instance, when Sanders used “existential threat” in a Democratic debate last October, FactCheck.com “corrected” him in a statement that went viral. “Scientists agree that climate change does pose a threat to humans and ecosystems,” the statement said, “but they do not envision that climate change will obliterate all people on the planet.”

This “correction” was widely mocked on Twitter (of all places) for appearing pedantic. “Climate change will only MOSTLY eliminate human life,” one person tweeted. Not so bad after all!

The word “existential” has gone on quite the journey since it entered the lexicon in the late 1600s. Initially, it simply referred to the existence of someone or even something, according to the Oxford English Dictionary. It was only near the end of the 20th century that people began adding “threat” to the end to mean that something’s existence was in peril, a meaning that gained traction after the terrorist attacks of September 11, 2001, and has soared in popularity in recent years. Dictionary.com reported several spikes in Google searches for the term “existential” last year, as the word suddenly became commonplace in politicians’ speeches. 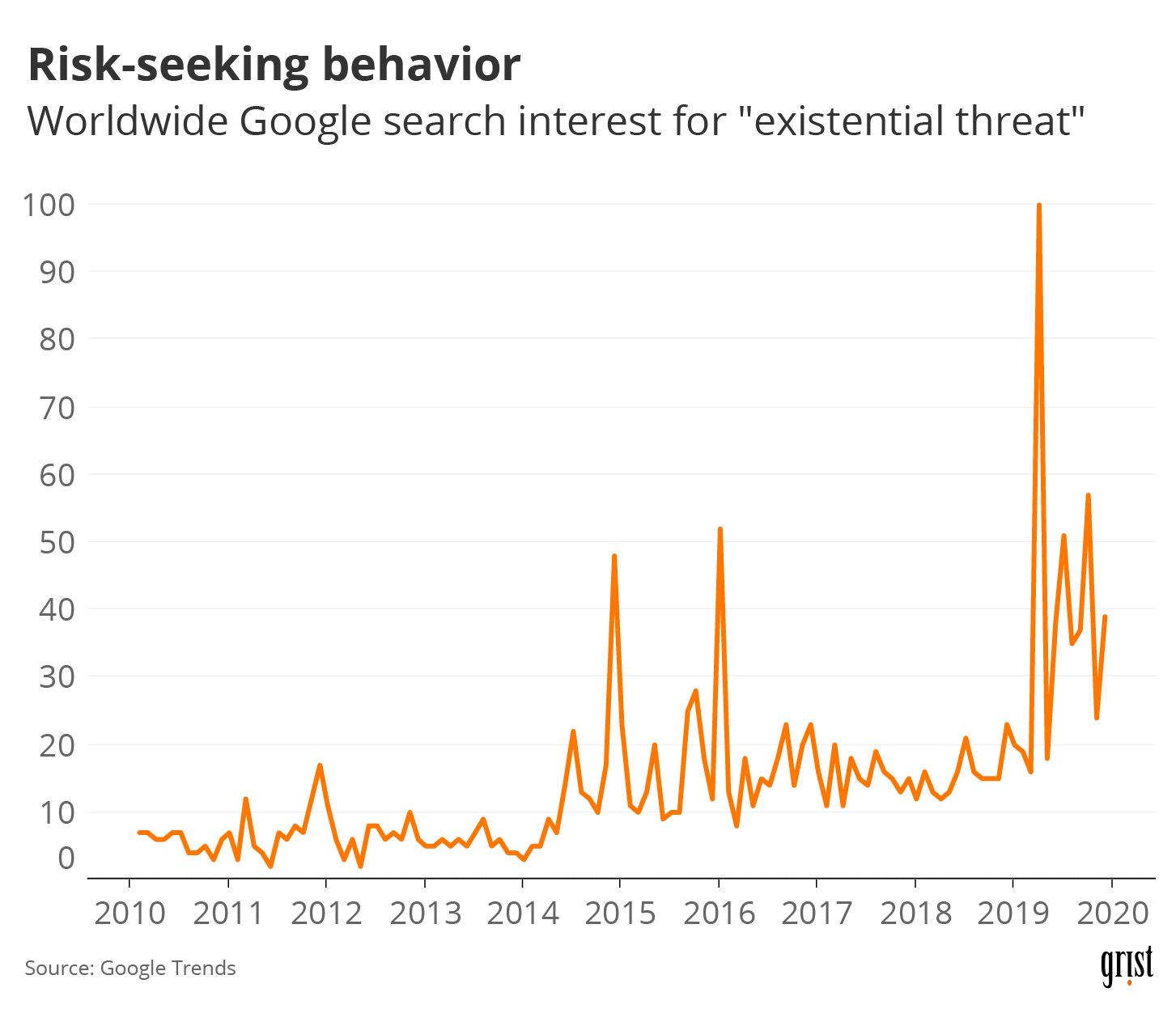 These days, the term is used in the literal sense to refer to threats to all of humanity. It’s also used in a metaphorical sense to invoke the demise of democracy or the end of a particular industry. Of course, definitions always loosen up and take new shapes, like how “awesome” now means “cool” instead of “I am filled with awe as if looking at God!” So the door is open to misunderstanding — and critique.

Some climate scientists think that calling climate change an existential threat is misleading. “I don’t think it’s an existential threat to humanity or ‘life on Earth,’” Daniel Swain, a climate scientist at the University of California, Los Angeles, told Grist. “There’s this popular notion that there’s some level of warming after which the warming becomes self-sustaining, which is actually not our understanding as physical scientists of how the climate system works.”

Scientists have long known that climate change may have “tipping points,” levels of warming at which certain parts of the climate system, like ice sheets or coral reefs, will not be able to recover. Though it’s true that passing any of these tipping points would mean a substantial increase in warming, as far as scientists know, none of them will create a situation in which the planet must keep warming forever. (Put another way, Earth isn’t Venus — which famously had a greenhouse effect so strong that it evaporated the planet’s oceans.)

It’s still true that climate change could cause serious and potentially catastrophic consequences. In extreme scenarios, it could mean large-scale transformations of human society. It could also threaten the existence of particular countries, cities, or groups. “I do think climate change poses an existential threat to specific demographics of people and to specific species and ecosystems,” Swain said. “And that really should concern us greatly.”

The problem with the existential threat narrative is that it might reinforce a sense that it’s too late to do — well, anything. Some activist groups, like the U.K.-based Extinction Rebellion, have managed to turn fear of human demise into a call to action. But they have also received criticism for, among other things, telling school children that the risk of climate change means they may not live to adulthood. Such scary messages might push people into eco-anxiety, or worse, paralysis.

“I’m seeing more and more of this eco-anxiety immobilizing people to the point of just giving up, or saying there’s nothing that we can do,” said Jacquelyn Gill, a professor of climate science at the University of Maine.

Swain similarly reported receiving phone calls and emails from young people “essentially telling me that they feel various levels of depression or fear or anxiety over the fact that they’re going to die soon because of climate change.” Though these students are likely a small subset of the population, their concern still shows how the fear of human extinction has run wild in certain groups.

Gill argues that activists and members of the public need to stop thinking about climate change as an “on-off switch” — either doomed or not doomed — and move toward thinking of it more like a “dimmer switch.”

That’s part of the reason that climate scientists have criticized activist rhetoric that humans have until 2030 to stop dangerous climate change. Sure, it might soon be too late to meet some of our most ambitious climate goals, such as keeping warming to 1.5 degrees Celsius, yet any amount of action in the present will help create a less overheated planet in the future.

So is climate change an existential threat? According to the scientific definition, likely not. As far as scientists can predict, a warming planet won’t cause changes so severe that they threaten the survival of the entire human species. And there is evidence that some of our most pessimistic projections may be exaggerated (though a Hothouse Earth wouldn’t be so fun).

That’s the sort-of good news. The bad news is that saying climate change won’t kill all of humanity is … pretty much the lowest bar possible.

In the meantime, politicians should be careful not to deploy the term “existential threat” too loosely. In all likelihood, they don’t mean that human life on the planet will go extinct. They mean that climate change is a really, really big deal and must be taken seriously. That should be sufficient reason to act.