Mangrove forests protect coastlines. ‘Synthetic mangroves’ could do the same for cities. 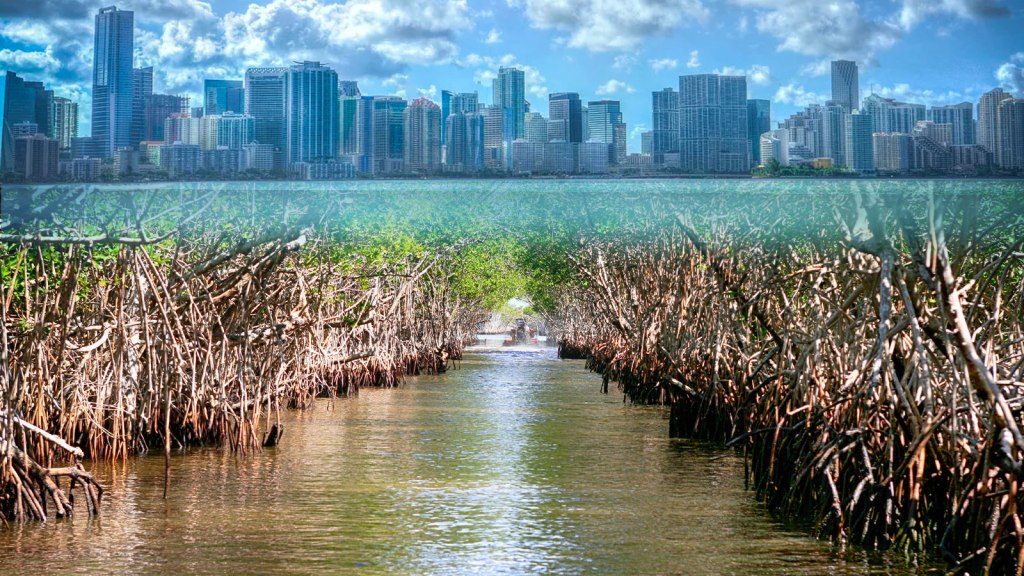 Grist / csfotoimages / Getty Images
Fake it til you make it

Mangrove forests protect coastlines. ‘Synthetic mangroves’ could do the same for cities.

Humans have lots of reasons to thank mangroves. These swampy, stilt-rooted trees store massive amounts of carbon on tropical shorelines, support nurseries for a wide variety of commercially important fish species, and protect coastal areas from storm damage. Besides these benefits for people, mangroves are unique among trees because they thrive in shallow seawater that’s too salty for most living beings to grow in. To better understand exactly how mangroves can grow in the ocean yet pump freshwater up to their leaves, engineers constructed what they’re dubbing “synthetic mangroves”, pressure-driven devices that can draw freshwater out of the saltiest seas — and have the potential to help manage stormwater in cities.

The synthetic mangrove they built resembles a large French press more than a tree, but it has some version of the most important parts of a mangrove: salt-excluding “roots,” a strong “stem”, and thirsty “leaves.” In a real mangrove, the pressure difference between the leaves and the rest of the tree acts like suction on a straw, pulling water up from the roots and through the stem. Natural membranes in the roots filter out the salt. For the synthetic mangrove, the big challenge was getting the fresh water pulled up the “stem” to the leaves without creating bubbles. The team landed on a silica-based layer for the stem and hydrogel for the leaves, and they found that their synthetic mangrove performed just like a real one, even with super-salty water.

Although the design helps engineers better understand how mangroves suck up water while leaving the salt behind, we shouldn’t expect to see fake mangrove forests sprouting up in place of desalination plants — treatment centers that turn saltwater into freshwater — anytime soon. The synthetic mangrove’s elegant pressure-driven desalination process works at small scales, but a large mangrove-inspired desalination plant would foot a hefty energy bill. Instead, the engineers who created the imitation mangrove have another idea for using their wannabe trees: incorporating them into the design of cities to make buildings more resilient in the face of storm surges.

In such a city, “the buildings themselves would soak up excess groundwater and evaporate the water from their walls and roofs,” they write in a recent Science Advances article explaining their invention. Like a mangrove, these buildings would rely on pressure differences to suck the water up, making them self-reliant buffers against storms flooding city streets. At least 30 so-called sponge cities using related technologies already exist in China, and the design may gain traction as storms and storm surges increase in intensity with climate change.

As people continue clearing real, living mangrove forests in alarming numbers, it’s worth remembering that synthetic mangroves don’t replicate all of real mangroves’ benefits.  Mangrove-inspired city design is promising for protecting people from the most extreme effects of storm surges and flooding, but in many places, the best way to do that will be leaving old-fashioned, living mangrove forests intact to do what they do best.