Two decades ago, back when most of the country was still faxing letters and using dialup connections, theorists imagined power plants that would someday remove carbon from the air. It sounded almost sci-fi at the time, like personal jetpacks and smartphones. Now the conditions could finally be right to start building them in California.

A report recently published by the Lawrence Livermore National Lab, Getting to Neutral, suggests that power plants across the state could profitably convert wood from forests and orchards into liquid or hydrogen fuels, all while capturing their carbon.

“This isn’t predicated on any technological breakthroughs, said George Peridas, a scientist at the lab and an author of the report. “It’s all available today, it’s just a question of getting it to the cookie-cutter [mass production] phase.”

The idea, which often goes by the awkward acronym BECCS (bioenergy with carbon capture and storage), relies on the fact that trees soak up carbon dioxide from the atmosphere and store it in their tissues. Burn them while capturing their carbon and you’d have an energy source that was removing greenhouse gases: voila, so-called negative emissions. Harvest trees sustainably, so that they are naturally reseeded, or replanted in orchards, and you have what starts to look like a long-term solution. 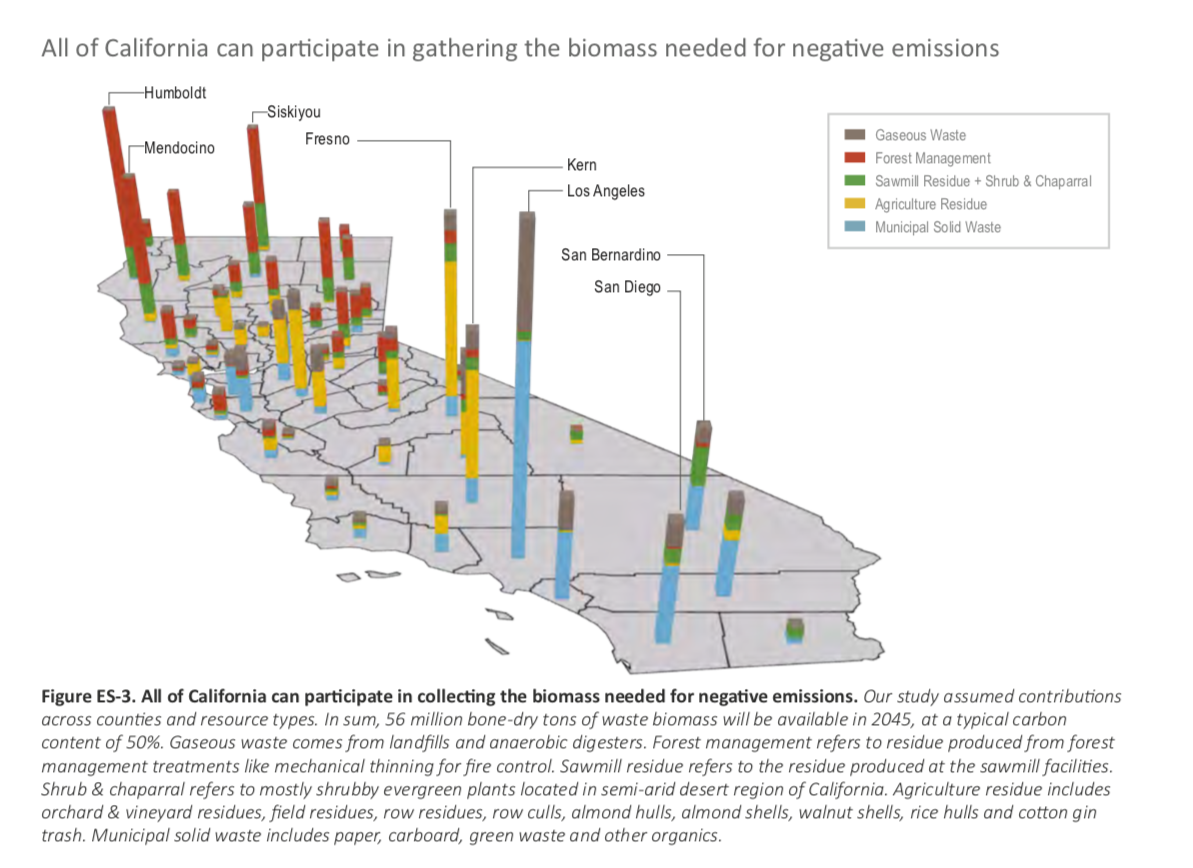 Klaus Lackner, director of the Center for Negative Carbon Emissions at Arizona State University, praised the report for its detail and practicality. “You should absolutely take it seriously,” he said. “It moves the conversation forward.”

Bioenergy isn’t the sole focus of the report. California just doesn’t produce enough bio-waste to capture the amount of carbon necessary for the state to hit its goals. It also needs natural solutions, like growing bigger trees, and machines filtering gases out of the air. “Let’s not kid ourselves, if you want to be carbon neutral you have to take carbon out of the atmosphere,” Lacker said.

The majority of scenarios for keeping the world from heating more than 2 degrees Celsius rely on building lots of negative-emissions power plants, but there are only a handful of pilot projects — one in England and several associated with ethanol plants in the Midwest. And Peridas thinks California has the potential to do it more cleanly, and on a larger scale.

“BECCS is a tainted acronym, it’s associated with exporting trees from the Southeastern United States and burning them in Europe,” he said.

The situation in California is different for a few main reasons. First, California has become a tinderbox for wildfires, and the state government has said it needs to thin out trees and brush from a million acres per year — an expensive undertaking. Second, the state is struggling to find a way to replace liquid fossil fuels with something that doesn’t contribute to global warming.

Peridas said California is doing a good job cleaning up its electrical system, but “the problem is the transportation sector where we have millions and millions of cars, trucks, and airplanes that are much more stubborn.” In California, as in the country overall, transportation is the largest source of emissions. And lastly, the state has said it must achieve carbon neutrality by 2045, a feat which requires pulling 125 million tons of carbon out of the air every year, on top of everything else it is doing, according to the report from the Lawrence Livermore National Laboratory.

Put all those problems together and they could lead you to one big solution, said Dan Sanchez a scientist at the University of California, Berkeley, and another author of the report. The state has already dedicated money toward buying low-carbon fuels, and if it put $5-$15 billion a year toward negative emissions, it would provide the cashflow for workers to remove small trees from dry forests, reducing wildfire risks.

That price tag doesn’t look so high when compared to the $30 billion Pacific Gas and Electric is facing in wildfire liabilities, and the even higher estimates of damage that fires have done to the state’s economy.

Compared to petroleum, turning wood into liquid fuels appears ridiculously expensive. But add up the other benefits — that is, wildfire reduction, and greenhouse gas removal — and it starts to look like a bargain.

All the different pieces of technology needed to convert wood to gas, catch the carbon, and then pump it into the ground already exist independently. The next step is to put them all together. There are already some commercial efforts underway: A plant is under construction outside Reno, Nevada, that will convert landfill waste into crude oil. And a California company is converting a wood burning plant near Bakersfield to produce hydrogen fuel, while storing the carbon dioxide underground.

Are Earth’s species really doomed? This study has a hot new take.