The Philippines volcanic eruption is harming public health, but not the climate — yet 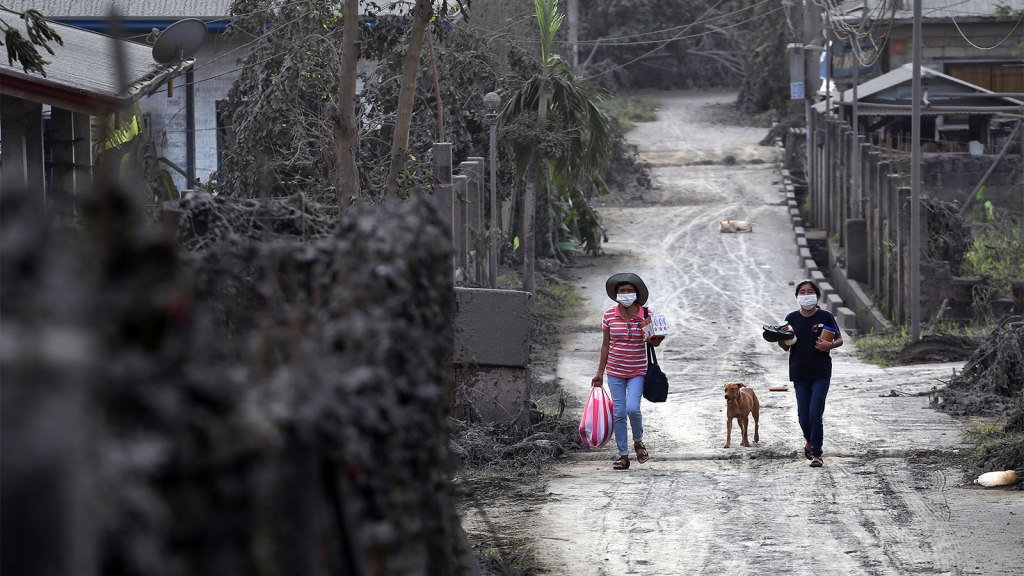 The Philippines volcanic eruption is harming public health, but not the climate — yet

When Mount Pinatubo erupted in the Philippines in 1991, it plunged the surrounding area into darkness as an avalanche of hot ash and lava poured down. Ash buried homes, smoke blocked the sunlight, and deadly mudslides swallowed nearby cities. So when the Taal volcano, located 90 miles south of Mount Pinatubo, exploded on Sunday, many Filipinos feared the worst. It felt like déjà vu.

The Taal volcano, surrounded by the waters of the Taal Lake in the province of Batangas, just 40 miles from Manila, is a famous tourist destination. Visitors and residents alike were caught off guard this week when Taal spat enormous clouds of ash into the air. Tens of thousands of people living within a 9-mile radius of the volcano were ordered to evacuate, some finding shelter in classrooms and gymnasiums. No casualties have yet been reported, but houses and farms were destroyed, and thousands of animals were left behind by their owners.

Nearby regions are still experiencing small earthquakes, while seismologists warn of a possible volcanic tsunami, where water surging from the lake could deluge nearby villages. As of Friday, areas around the volcano still remain on Alert Level 4, which means another eruption could be imminent.

Amid all the bright lava and towering ash plumes, it’s easy to overlook that volcanic eruptions can dramatically affect air quality. Shortly after Taal erupted, air quality in the province of Batangas and nearby areas spiked to unhealthy levels, and face masks disappeared off the shelves. (Local business owners saw an opportunity in the tragedy, with some pricing face masks at five times their normal cost.) When aerosols like sulfur dioxide are inhaled, they can lead to asthma or respiratory diseases.

You can even see Taal’s volcanic emissions from space. Satellite imagery shows that strong winds pushed emissions from the eruption northward, leaving a trail of red, yellow, and blue.

The Philippines braces for a potentially massive eruption from one of its most active volcanoes. So far, the Taal Volcano has sent steam and ash high into the atmosphere since Sunday, as shown in this satellite imagery. pic.twitter.com/yYBtujm3YI

Volcanoes can also affect global temperatures — though Taal isn’t expected to have much of an effect unless there’s a bigger explosion. During Mount Pinatubo’s 1991 eruption, for instance, 20 million tons of sulfur dioxide and ash particles were released into the air, blowing all the way into the stratosphere. The catastrophic event also emitted tens of millions of tons of greenhouse gases, like carbon dioxide and water vapor. But thanks to sulfur dioxide, which reacts with water to form aerosols that reflect the sunlight back to space, the eruption ended up temporarily cooling global temperatures, which fell as much as 1 degrees F for about three years following the eruption.

The Philippine Institute of Volcanology and Seismology warned residents that Taal’s immense tremors could last from three days to seven months. But Mariton Bornas, chief of volcano monitoring and eruption prediction division in the Philippines, told CNN that the alert level would be lowered if there’s no activity within two weeks.

“We’re still measuring high levels of sulphur dioxide,” she said. “We’re still having earthquakes, new fissures are developing, and the volcano is swollen. So, the potential for an explosive eruption is still there.” Let’s hope the volcano settles down before it becomes another Mount Pinatubo.