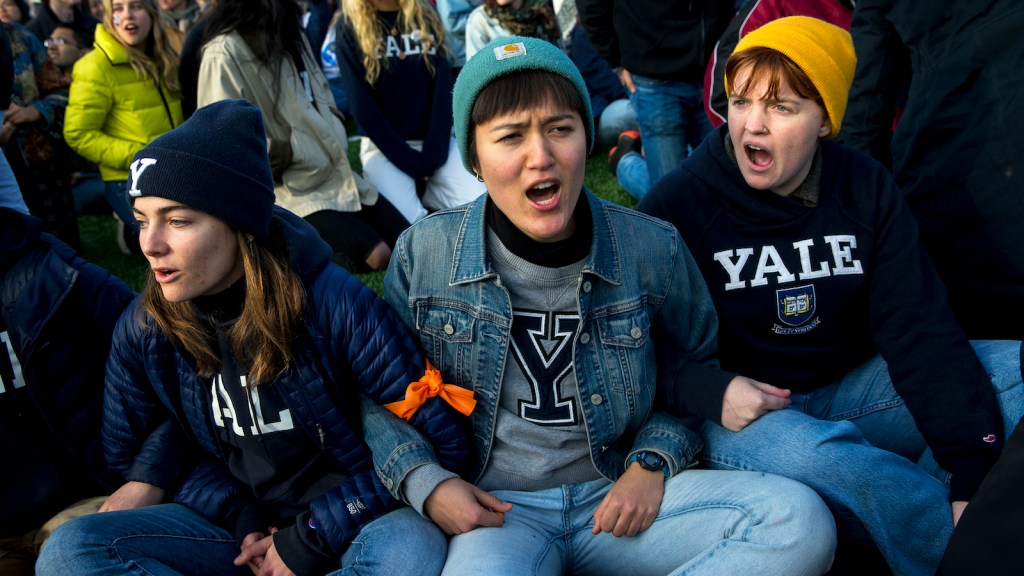 Yale is one of many universities making big pledges to address the climate crisis. This year, it’s on track to cut emissions 43 percent below 2005 levels, and the institution has promised to achieve carbon neutrality in its operations by 2050. But a coalition of students is pressuring it to do much more.

In an op-ed addressed to Yale’s president, Peter Salovey, Yale Law School students Alan Mitchell and Lexi Smith exhorted the university to fully decarbonize by 2030. “It’s time for the university to do its part to ensure that there will still be a habitable world for its students to serve,” they wrote in the essay published last week in the Yale Daily News, an independent student newspaper.

The op-ed was preceded by an open letter that the students sent to Salovey in early October, elaborating their argument with three key points: Yale has almost unrivaled financial resources, its peer universities are stepping up, and faster decarbonization for Yale would put pressure on other institutions to ramp up their climate ambitions.

“A failure by the wealthiest to lead will result in extensive human suffering,” the letter states. As of this writing, it has been signed by 38 campus groups and nearly 200 individual Yale students, faculty, and alumni. Six weeks after sending it, they have yet to hear back from the Yale administration.

Yale is actually already in the process of developing a new strategy for decarbonization. Salovey announced in September 2019 that a task force of six experts from across Yale’s schools would “explore how quickly Yale can achieve net zero carbon emissions,” as a university press release put it.

To Mitchell, who is a third-year student at Yale Law School and a former board member of the Yale Environmental Law Association, the announcement signaled a possibility that the university might announce a more aggressive decarbonization timeline. But communications with the Yale administration, including a February meeting with the school’s director of administrative affairs, Pilar Montalvo, have left him less than optimistic.

“They were implying very strongly that they were going to pick 2050,” Mitchell said — a deadline that the university had already committed to back in 2016. “I just thought that was unacceptable. 2050 is too late. It’s too slow. If one of the wealthiest institutions in the world is doing this on a 2050 timeline and if others follow suit, then we’re in for a true climate catastrophe.”

Montalvo declined to comment on the meeting she held with Mitchell.

The 2050 benchmark comes from the landmark 2018 U.N. report, “Global Warming of 1.5 °C,” which warned of potentially irreversible damage to the planet and its ecosystems unless humans slash global greenhouse gas emissions by 45 percent by 2030 and reach net-zero by mid-century.

But some institutions have an obligation to move faster than others, Mitchell said. Especially if the Senate remains under Republican control for the next two years at least, an absence of federal leadership on climate will put the onus of decarbonization onto cities, states, and communities that might be able to move more nimbly. Of the smaller actors, he added, those with the greatest resources have an ethical obligation to decarbonize rapidly — that way, they can set an example and provide guidance and technology to others who are trying to eliminate their carbon emissions.

According to Mitchell, Yale is perfectly positioned to take that leadership mantle. “Yale has a lot of power,” he said. Besides the school’s $30 billion endowment, which makes it one of the wealthiest private universities on the planet, Yale can also use its cultural capital to encourage peer institutions to take bolder action for the planet.

“They can map out a way for others to follow,” Mitchell said. “Because they have all these resources, they can help New Haven transition away from fossil fuels, and then they can share what they’ve learned with other communities.”

Yale’s Office of Public Affairs and Communications did not immediately respond to requests for comment.

Several other colleges and universities in the U.S. and abroad — including Smith College, Vassar College, and University College London — have already pledged to achieve carbon neutrality much sooner than 2050. The University of California’s target is 2025.

It’s unclear when Yale’s task force on decarbonization will release its recommendations on how quickly the university can zero out its carbon emissions. Students had expected to hear from them last spring, but that was before COVID-19 hit. For now, Mitchell and fellow activists plan to continue their pressure campaign by adding signatures to their open letter, strengthening alliances with other climate groups on campus, and publishing op-eds in the New Haven Register, a local daily newspaper.

“The Yale community needs to say we have a moral duty to lead,” Mitchell said. “How can we ask the whole world to change their ways of life if the richest and wealthiest institutions are unwilling to do so themselves?”