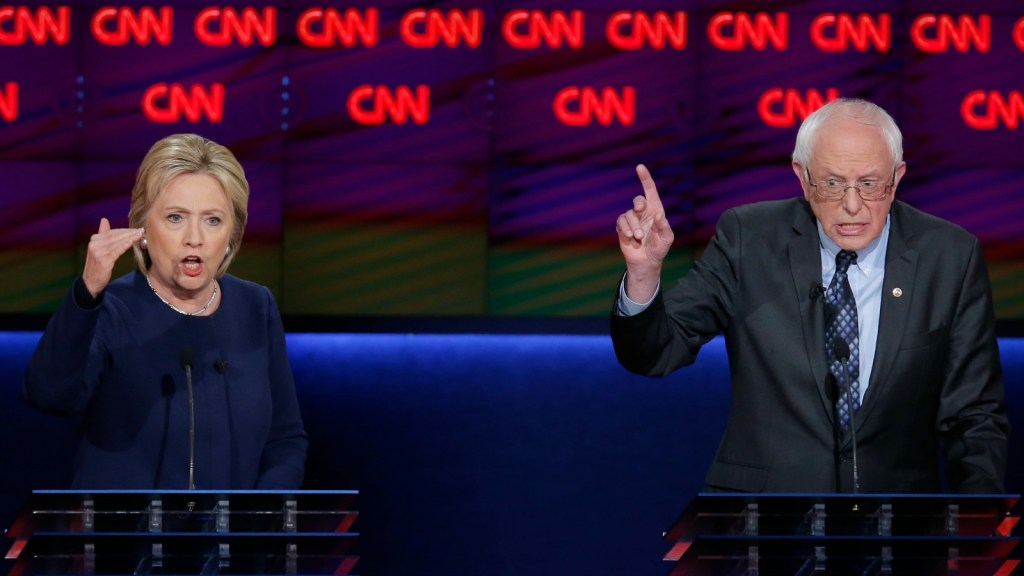 The Democratic Party’s platform drafting committee has written a stronger climate change section than the platform had in 2012, but it also rejected a series of more ambitious climate and energy amendments on Friday. That’s raised the ire of Bernie Sanders and his appointees to the drafting committee, like climate activist and author Bill McKibben.

The first draft of the platform, voted on by the 15-member drafting committee, is now complete, though it hasn’t been made publicly available. On July 8 and 9, in Orlando, the full 187-member platform committee will meet and debate further changes before approving and sending its draft on to the party convention, to be held in Philadelphia the last week of July.

Sanders slammed Hillary Clinton’s committee appointees for blocking progressive provisions and pledged to continue fighting for changes to the document. “Despite the growing crisis of climate change, [Clinton’s delegates] voted against a tax on carbon, against a ban on fracking,” said Sanders in a statement on Sunday. “We intend to do everything we can to rally support for our amendments in Orlando and if we fail there to take the fight to the floor of the convention in Philadelphia.”

How did the platform become a big deal this time?

Drama over the party platform is atypical. Usually the document is just a quietly produced, platitudinous summation of the presidential nominee’s policy vision. But if Sanders gets some of the changes he’s still pushing for, this year’s platform could look very different from the last one, adopted four years ago under a moderate incumbent president with a mixed record on environmental issues.

Sanders’ campaign is dedicated to pushing American politics leftward, so he and his team have been focused on influencing the platform. After making a stronger-than-expected primary showing, Sanders asked for seven appointments to the 15-person drafting committee. The party gave him five, Clinton got six, and the remaining four were appointed by party chair Debbie Wasserman Schultz. Now that Sanders has lost the fight for the nomination, he and his supporters see the platform as their chief vehicle for having a lasting impact on the party’s direction.

Sanders and Clinton each appointed a climate expert to the drafting committee. Sanders chose McKibben, cofounder of climate action group 350.org (and a member of Grist’s board of directors). Clinton picked Carol Browner, who served as President Obama’s climate czar from 2009 to 2011.

Sanders’ other appointees were all progressives, of course. Clinton and Wasserman Schultz also chose fairly left-leaning slates. In analyzing the appointees, The Nation’s John Nichols concluded that “the drafting committee has a progressive majority.” That led climate hawks to hope that some of the more aggressive proposals from the Sanders’ camp might pass. But that’s not how things have played out so far.

What they agreed on

The drafting committee members did come together on some critical climate-related decisions. The biggest and most important shift from the 2012 platform was dropping the call for “all-of-the-above” energy development, which reflected the priorities of Obama’s first term. The members also unanimously agreed to call for fully switching to clean energy by 2050.

The draft platform echoes the Paris Agreement in aiming to keep global warming below 2 degrees C over pre-industrial levels, with the hope of staying below 1.5 C if possible. It calls for a Department of Justice investigation into fossil fuel companies (read: ExxonMobil) accused of misleading the public about climate science. It backs elimination of fossil fuel subsidies in the tax code and extension of support for renewable energy development, such as the wind production tax credit.

Browner told Grist that the language supporting renewables was written in from the beginning and never even required an amendment. “There was a lot of stuff where there was common ground that was embedded in the conversation,” she said.

And some amendments proposed by McKibben on Friday were passed unanimously, such as a noncontroversial call for more bicycle and pedestrian infrastructure and a statement of opposition to electric utilities’ efforts to quash solar energy. As Browner put it, “The draft has everybody’s fingerprints.”

What they fought over — or, what the Sanders team lost

But while Sanders and progressive climate activists see the current draft platform as a modest step in the right direction, they are far from satisfied. The platform document sets strong big-picture goals for curbing climate change and boosting clean energy, but doesn’t include specific policies that would actually help meet those goals.

“In the draft, everyone agreed that there should be 100 percent clean energy by 2050, but every measure I put forward to actually get us there went down by the same 7-6 vote, with all the Clinton people voting in a bloc against,” said McKibben. Only one non-Sanders appointee, Rep. Barbara Lee (D-Calif.), who was chosen by Wasserman Schultz, crossed over to vote with the Sanders bloc on the controversial climate change amendments. One committee member was absent, and the chair did not vote.

The half-dozen McKibben amendments that went down to defeat included calls for:

Only one of those was replaced with compromise language: The Clinton side offered and passed an amendment endorsing a gradual phaseout of fossil fuel extraction on public lands.

Climate Hawks Vote, a political action committee that endorsed Sanders, issued a statement praising the Exxon investigation amendment but also warning, “We’re fighting not just the Republicans, but also the incrementalists within the Democratic Party.”

The Clinton campaign says its reluctance to accept some of McKibben’s amendments reflects legitimate concerns about the policy implications, not mere political calculation. Not all experts agree that a carbon tax is the most effective way to reduce emissions, for example. Mary Nichols of the California Air Resources Board had pointed out in her testimony to the committee a week earlier that a carbon tax does not guarantee emissions reductions, while direct regulation, such as Obama’s Clean Power Plan, does. Clinton supporters rejected a blanket prohibition on lending for foreign fossil fuel development projects on the grounds that the U.S. relationship with any given developing country may have competing priorities, and they opposed the climate test for energy projects because they worried it could prevent necessary projects like transmission lines for electricity that may be partly generated from dirty sources.

There are also obvious political concerns about some of these proposals. A carbon tax, for example, would have no chance of passage in the Republican-controlled House of Representatives, but a call for such a tax would hand Donald Trump a potentially effective new weapon, letting him claim that Democrats want to raise energy prices.

It’s unlikely that Sanders’ supporters will be able to change many platform planks in Orlando or Philly. Essentially, they are calling for Sanders’ platform to become the party’s platform. But Sanders lost the primary race, and it stands to reason that the party platform would reflect the views of the candidate who won.

And that candidate has to consider not just the best climate policies in the abstract, but the ones that will help her win in November. “We’re going be facing a group of climate science deniers in Congress,” says Browner. “So what some of us are looking at is, How do we get a president elected and use the tools of government to continue to make real advances?”