10 years after Deepwater Horizon, the U.S. is even more at risk of a major oil spill 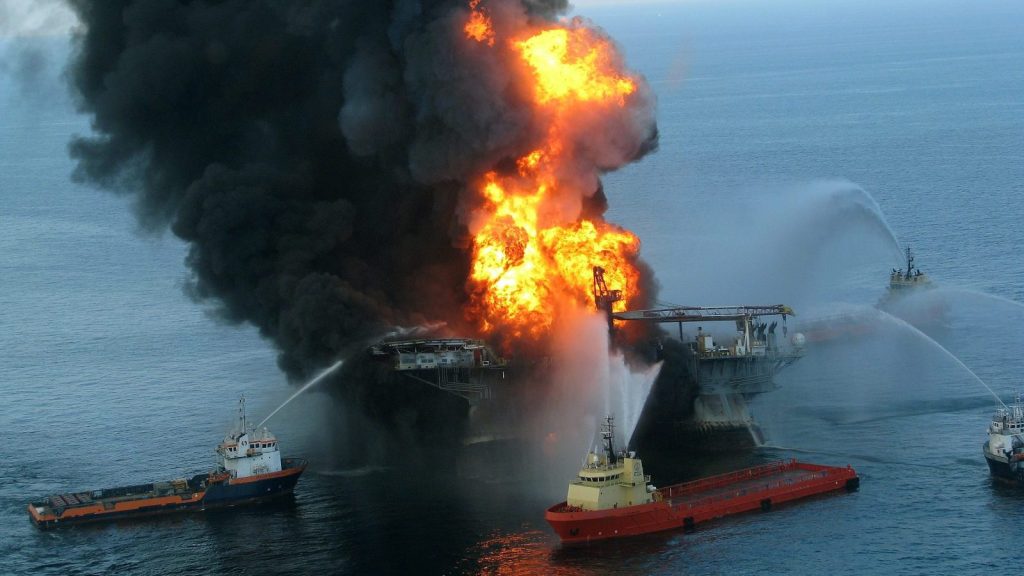 10 years after Deepwater Horizon, the U.S. is even more at risk of a major oil spill

On the evening of April 20, 2010 — 10 years ago today — BP’s Deepwater Horizon oil rig exploded while the fossil fuel giant was drilling an exploratory well off the coast of Louisiana, nearly a mile below the ocean surface.

The catastrophic event killed 11 workers and, over 87 days, unleashed a torrent of more than 200 million gallons of crude into the Gulf of Mexico — the largest oil spill in U.S. history. An estimated 1 million birds and countless marine animals perished. Oil washed up along more than 1,300 miles of coastline in Texas, Louisiana, Mississippi, Alabama, and Florida, devastating local economies.

In the weeks after the blowout, President Barack Obama likened the spill to “an epidemic — one that we will be fighting for months and even years.” He vowed to hold responsible parties accountable and implement whatever regulatory reforms were needed to prevent similar disasters.

Indeed, a lot changed after the catastrophic incident. The Obama administration divided the Minerals Management Service, a scandal-plagued federal agency that both issued offshore leases and policed drilling operations, into three separate agencies to avoid conflicts of interest. The oil industry created the Marine Well Containment Company, an independent nonprofit that has equipment at the ready to respond to future deepwater well incidents and contain the flow of gushing oil. And in 2016, the Interior Department’s Bureau of Safety and Environmental Enforcement finalized major offshore drilling safety regulations.

But a decade after Deepwater, experts and environmental advocates warn that the U.S. remains woefully unprepared for a major spill — and is perhaps even more at risk of one due to the Trump administration’s relentless push to expand offshore drilling and gut environmental regulations.

“The question of whether we’re any better off — my concern is we’re actually headed towards the exact same type of circumstances that were in place” at the time of the Deepwater disaster, Elizabeth Johnson Klein, the Interior Department’s associate deputy secretary under Obama, told HuffPost. “I don’t feel good about it.”

The Trump administration’s “energy dominance” agenda has put pressure on industry to develop in new, riskier, and more expensive areas, Klein said. When companies are forced to cut costs, safety is typically one of the first things to take a back seat. Then there’s the industry-tied political leaders at Trump’s Interior Department, who Klein says “have not demonstrated that they’ve learned lessons from Deepwater Horizon.”

Interior Secretary David Bernhardt is a former oil and gas lobbyist whose clients included Halliburton, the oil services giant that in 2014 agreed to a $1.1 billion settlement for its role in the 2010 blowout. Scott Angelle, the director of the Bureau of Safety and Environmental Enforcement, is a former board member of oil and gas pipeline company Sunoco Logistics Partners LP who, during his brief stint as lieutenant governor of Louisiana, led the state’s push to lift the moratorium on offshore drilling in the Gulf that the Obama administration put in place after Deepwater Horizon.

With little regard for climate change and other environmental impacts, the Trump administration has sought to transform the U.S. into the world’s leading fossil fuel behemoth. In January 2018, it rolled out a controversial plan to make nearly all U.S. waters — roughly 90 percent of the U.S. Outer Continental Shelf — available for oil and gas leasing, including large swaths of the Arctic, Atlantic, and Pacific Oceans. In its proposal, Trump’s Interior Department cited Obama-era safety regulations put in place after Deepwater Horizon, noting that while offshore oil and gas production “will never be totally risk-free” the agency “has made, and is continuing to make, substantial reforms to improve the safety.” Those changes, it said, included rules to reduce the risk of a rig losing control of a well, as happened in the Deepwater disaster.

The administration then turned around and gutted the very safeguards it highlighted to make its case for expanded drilling, arguing that the regulations were burdensome on offshore producers. It weakened the Production Safety Systems Rule, loosening notification and certification rules for fossil fuel companies and scrapping a requirement that offshore equipment be designed to withstand the most extreme weather and pressure conditions. And it overhauled the Well Control Rule, a monitoring regulation that took effect in 2016 and required additional inspection and maintenance of blowout preventers, devices designed to automatically seal a well and stop an uncontrolled release of oil and gas. The Trump rollback eased inspection and oversight requirements.

“Today’s final rule puts safety first, both public and environmental safety, in a common sense way,” Bernhardt said in a statement at the time.

With fewer safeguards in place, the administration has plowed ahead with offshore leasing. Last month, as the deadly coronavirus pandemic gripped the nation, Interior offered at auction 78 million acres in the Gulf of Mexico to oil and gas producers. The lease sale brought in approximately $93 million for just shy of 400,000 acres, the smallest total for an offshore auction since 2016.

“As I see it, the essential lesson from Deepwater Horizon is that industry and government should be putting their greatest energies into preventing operational accidents, blowouts, and releases,” Donald Boesch, a professor of marine science at the University of Maryland who served on the bipartisan commission that investigated the causes of the Deepwater Horizon, wrote in a recent piece published in The Conversation. “Yet the Trump administration emphasizes increasing production and reducing regulations. This undermines safety improvements made over the past 10 years.”

The seven-member oil spill commission concluded in a 2011 report that a “culture of complacency” by both industry and government led to the Deepwater disaster. And while industry often says that offshore drilling has never been safer, others see things quite differently.

“Never safer than what?” Mark Davis, director of the Institute on Water Resources Law and Policy at Tulane University, said during a call with reporters last week. The underlying issue prior to Deepwater Horizon and still today is that the federal government has a “financial stake in the success” of offshore fossil fuel development, he said. Extracting oil is driven by policy rather than data.

“It was policy to believe that bad things wouldn’t happen, and it was policy that you don’t waste time planning for things that aren’t going to happen,” Davis said.

“Until we get our policies and legal architecture in line with the risks we are running, we are going to be very vulnerable,” he added.

Last week, ahead of the 10-year anniversary of Deepwater Horizon, ocean advocacy group Oceana published a report that documented the many economic and environmental impacts of the spill and concluded that “the poor safety culture and lack of oversight that led to the BP disaster persist.”

“If anything, another disaster is more likely, because the industry is drilling deeper and farther offshore, which increases the likelihood of a spill and makes responding to a spill more difficult,” the report stated.

“Indeed, Deepwater Horizon is not the worst-case scenario,” Ian MacDonald, an oceanography professor at Florida State University, said on a call with reporters last week.

The next one could be far more catastrophic — perhaps on par with the ongoing Taylor oil spill, which began in September 2004, after Hurricane Ivan ripped through the Gulf of Mexico and triggered submarine mudslides that toppled a Taylor Energy platform 11 miles off the coast of Louisiana. At least 25 wells were damaged, and oil has been leaking from the site for the last 15 years. A federal government study published in June 2019 and coauthored by McDonald estimated that as much as 4,500 gallons of oil is leaking from the site each day ― a figure orders of magnitude higher than Taylor’s estimates.

McDonald warned this could be the future of deep ocean oil spills. Subsea landslides are not unusual in the Gulf of Mexico, and are often the result of earthquakes. More than 50 percent of the oil produced in the Gulf is from platforms at depths greater than 1,000 meters, McDonald said.

“I would submit that the worst case scenario for a future oil spill is not loss of exploration well drilling, but the catastrophic destruction of a production platform in deep water,” McDonald said. “If a mudflow were to destroy one without warning, we could get a discharge of oil that could continue for years.”