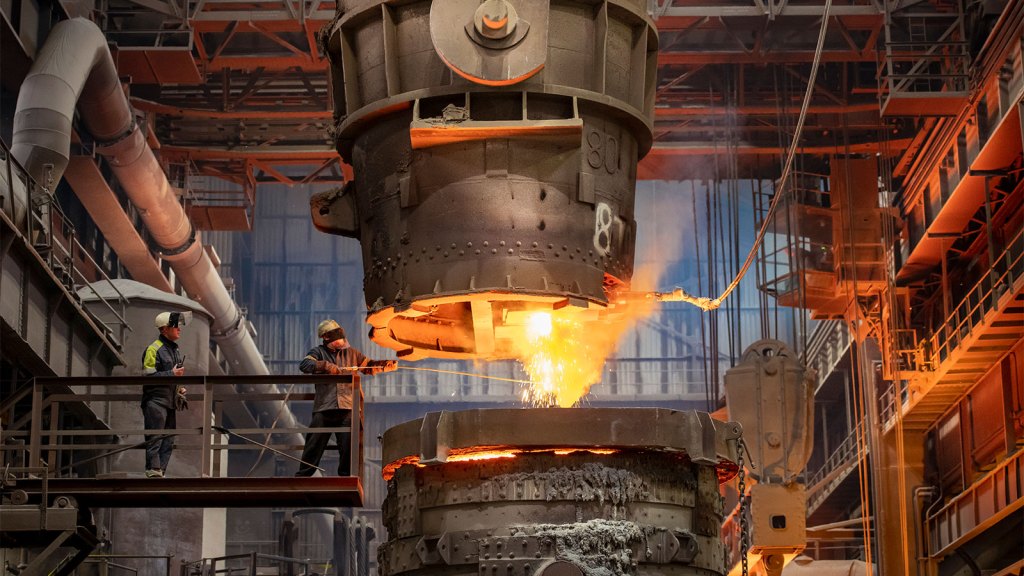 Coal’s grip on the global electricity sector is loosening as more utilities and companies invest in renewable energy. But one major coal consumer — the steel industry — is finding it harder to kick its habit.

Steel companies make nearly 2 billion tons of high-strength material every year for bridges, buildings, railways, and roads. The furnaces that melt iron ore to make steel consume vast amounts of coal. As a result, the industry accounts for roughly 8 percent of annual carbon dioxide emissions, as well as a toxic soup of air pollutants.

Steelmakers worldwide are facing mounting pressure from government regulators and consumers to decarbonize operations. Doing so is essential to limiting global warming to 1.5 degrees Celsius and staving off most of the worst effects of climate change, experts say. In recent months, the world’s three top producers — Europe’s ArcelorMittal, China’s Baowu Steel, and Japan’s Nippon Steel — committed to achieving net-zero emissions by 2050, echoing targets set in their home countries.

But in order to curb steel’s carbon emissions, the sector will have to transform how the material is traditionally made.

Outside Boston, in the industrial suburb of Woburn, one company is working to replace coal with electrons. Boston Metal, an outfit spun out of the Massachusetts Institute of Technology, or MIT, uses electric currents to heat iron ore into a bright orange-white liquid, which converts into metal and cools as gray steel blocks. The process doesn’t create greenhouse gas emissions, and when powered with renewable electricity, can be completely emissions-free.

Tadeu Carneiro, the company’s CEO, said Boston Metal is “ushering in a new era of metallurgy.” The nine-year-old startup raised $50 million in January from a slew of investors, including the Bill Gates-led Breakthrough Energy Ventures and the venture capital arm of BHP, one of the world’s biggest mining companies. The new funding will allow it to build a demonstration plant in Woburn that can produce 25,000 tons of metal per year; so far, the company has made only several tons of steel in total.

Boston Metal’s approach is one of a handful of breakthrough technologies with the potential to decarbonize steelmaking. Companies are piloting systems across Europe that use hydrogen in furnaces in lieu of coal. In Brazil, some steel mills are mixing in biochar, which is made from agricultural waste. Other firms are continuing the use of coal, but are considering retrofitting facilities with carbon capture devices to negate emissions.

Testing and scaling technologies that remove the emissions from steelmaking isn’t the only challenge to decarbonizing the building material. Greener products must also compete in an industry with relatively low profit margins and an excess supply of inexpensive Chinese steel.

To level the playing field, public agencies and private businesses will need to set policies that encourage buying emissions-free steel, or make it more expensive to purchase conventional supplies, said Nate Aden, a senior fellow at the World Resources Institute who studies industrial sector transformations. (California, for instance, limits the total amount of carbon emissions associated with steel and other materials used in state-backed construction projects.)

“We haven’t had nearly enough research and development in this space for the past couple decades,” Aden said. “It’s exciting.”

About 70 percent of steel today is made how it’s always been made: in giant, extremely hot furnaces. Purified coal, or “coke,” is heated and melted with iron oxide and limestone, then injected with oxygen to reduce the carbon content of the mixture and to remove impurities.

Almost all other steel is made from scrap metal that’s melted down in an electric arc furnace. This approach doesn’t use coke as a raw material. But it does require significant amounts of electricity to heat metal to nearly 3,000 degrees Fahrenheit — and most of that power comes from coal-fired power plants.

At Boston Metal’s research facility, the steelmaking process takes place inside a squat metal cylinder called an electrolytic cell. Electricity is fed in from the top and flows through a chimney-like tube made from a chromium-based alloy. The electric current then passes across a liquid solution made of iron oxide and other metallic minerals. This heats the oxide melt and drives chemical reactions that result in the production of oxygen gas and liquid iron. Oxygen bubbles to the top, while fortified iron pools at the chamber’s bottom and eventually hardens into steel.

Donald Sadoway, a professor of materials chemistry at MIT, said he first got the idea for “molten oxide electrolysis” decades ago while researching alternative ways to produce aluminum, another metal made via a carbon-intensive process. In 2012, he co-founded Boston Electrometallurgical (a.k.a. Boston Metal) with two partners, and they began testing the method in laboratory cells the size of highball tumbler glasses. The company now runs three pilot lines at the Woburn facility.

With the $50 million investment from Breakthrough, BHP, and others, Sadoway said the goal is to demonstrate the technology at a scale large enough to convince investors to back construction of an industrial facility. If that future plant comes to fruition, he estimates Boston Metal’s process will use about 20 percent less energy than a conventional blast furnace. And if the facility can use cheap, plentiful renewable electricity, perhaps from a hydropower plant, its steel would cost less than the competition.

“At scale, we expect to make better metal at lower cost and with no CO2 emissions,” he said.

As Boston Metal expands its efforts in electrolysis, many steel companies are placing their bets on hydrogen to curb emissions.

Hydrogen doesn’t emit greenhouse gases when burned and can be made by using renewable electricity to bust up water molecules (although most hydrogen today is made with natural gas, through a process called steam methane reforming). In steelmaking, hydrogen sets off a chemical reaction that removes oxygen from iron ore, eliminating the need for purified coal in the blast furnace.

Luxembourg-based ArcelorMittal is building a demonstration plant using this method — called hydrogen-DRI, for “direct reduced iron” — in Germany. Japan’s Mitsubishi Heavy Industries plans to trial the technology this year at a 250,000-ton per year steel plant in Austria. And in Sweden, steelmaker SSAB and its partners have built a pilot plant to produce hydrogen supplies and test hydrogen-DRI, using only hydroelectric power for both operations.

Building a hydrogen-based steel industry will require significant spending to not only build new plants but also produce, transport, and store green hydrogen. For these projects to be economically viable in the world of cheap steel, the prices of hydrogen and renewable electricity must drop considerably, while the price of carbon dioxide must rise, Aden wrote in a 2020 paper as part of an international team of experts.

There’s another longer-term challenge for new, clean projects. Demand for steel is declining or stagnating in key markets, including the United States and Japan. Producers are already making more steel than the world needs. Meanwhile, construction companies and car makers are increasingly using lightweight aluminum, plastics, and even wood in their projects. That could make it harder to justify future investments or research, according to Aden.

Still, the steel industry remains an essential part of the world economy — as well as a significant source of the world’s emissions.

“What’s clear is that we’ll be needing steel for the next few decades,” Aden said. “So I think all these new projects are worthwhile.”