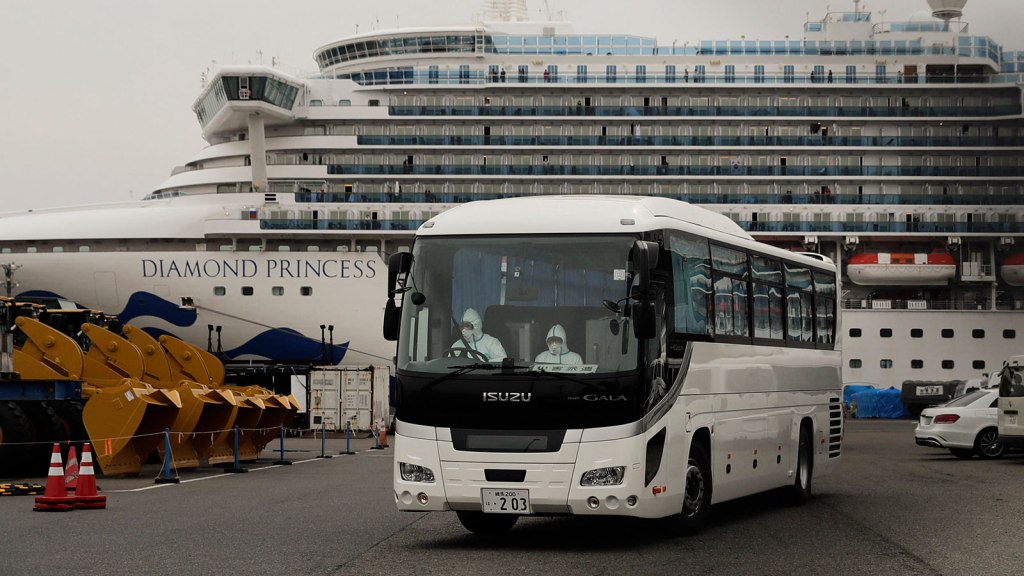 A bus leaves a port where the quarantined Diamond Princess cruise ship is docked on Saturday, February 15, in Yokohama, near Tokyo. AP Photo / Jae C. Hong
a supposedly fun thing

As the Diamond Princess sailed toward Yokohama, Japan, in early February, the novel coronavirus was spreading rapidly throughout the cruise ship. More than 700 passengers and crew members who were stuck in tight quarters on board ultimately tested positive for the virus. After weeks of quarantine at sea, guests finally disembarked and moved into land-based medical centers. Seven people died. And traces of coronavirus reportedly remained on board, lingering on surfaces in the ship’s cabins for as many as 17 days, researchers at the Centers for Disease Control and Prevention said.

Cruise ships are often the settings of infectious disease outbreaks, in part because guests from many countries are in close and constant contact, according to the CDC. In recent weeks, COVID-19 has sent the $45.6-billion global cruise line industry sputtering, forcing companies to cancel or reroute dozens of voyages. Carnival Corp., the world’s largest cruise company, has temporarily paused operations across its global brands — including Princess Cruises, which operates Diamond Princess.

Like airlines and hotels, cruise companies are poised to take a financial shellacking as most of the world stays home — and even after, as travelers have likely grown more wary of cruise-bound illness. Carnival’s stock has fallen by as much as 80 percent since its January peak. So it’s no surprise that politicians, like President Donald Trump, discussed bailing out the industry as the coronavirus crisis continued deep into March.

Green groups and some Senate Democrats bristled at the idea of providing federal support for the cruise industry, in particular, given its mixed environmental record. Operators like Carnival have paid multimillion-dollar fines in recent years for illegally dumping oily water, discarding plastic waste into the ocean, and burning high-sulfur fuels in restricted areas. Cruise ships are also significant sources of air pollution, which threatens the health of residents in waterfront communities.

In letters to Senate leaders, environmental advocacy organizations urged Congress to ensure that any financial aid for cruise lines come with strings attached. A group of eight senators — including Sheldon Whitehouse of Rhode Island, Richard Blumenthal of Connecticut, and Cory Booker of New Jersey — said that requiring vessels to reduce carbon emissions and air pollution “would result in cleaner air and a healthier ocean,” as would raising penalties for illegal dumping.

However, cruise lines were cut out of the $2 trillion stimulus package, which included a $500 billion lending program for corporations, that Congress passed and the president signed on Friday. That’s because cruise giants Carnival, Norwegian Cruise Line Holdings, and Royal Caribbean Cruises have headquarters offices in Miami but are incorporated outside of the United States, pay almost no federal income taxes, and primarily hire foreign contractors.

But President Trump voiced support for allowing companies to re-register as U.S. corporations, so they could receive government support. And the industry reportedly won small concessions in the final bill that kept the door open to them receiving federal help. Senator Dan Sullivan of Alaska, who says he supports cruise lines because they contribute to his state’s economy, pledged to “work to educate his colleagues on the importance of the cruise-ship industry for tourism in Alaska, as well as other states,” the Wall Street Journal reported.

Kendra Ulrich, the shipping program director for the environmental group Stand.earth in Washington State, said the stimulus talk “has raised very important and public questions about how the cruise industry is regulated and the ways in which they operate in our communities.” She added that it was “encouraging” to see legislators, like Whitehouse, Blumenthal, and Booker, respond to concerns about the cruise industry’s environmental performance.

Cruise Lines International Association, the industry’s main trade group, defended their members’ practices in an emailed statement: “The cruise industry has always been a leader in responsible tourism, including its commitment to environmental sustainability,” said spokesperson Bari Golin-Blaugrund.

Stand.earth, Greenpeace, and Friends of the Earth sent the Senate a list of conditions that, if put into practice, would dramatically change how cruise ships operate in the post-pandemic future. Their demands range from eliminating a common and particularly noxious fuel to requiring companies to set strict targets for reducing greenhouse gas emissions.

Most of the world’s 300-plus cruise ships run on heavy fuel oil, or so-called “bunker fuel,” made from the sludgy dregs of the petroleum-refining process. On January 1, international maritime regulations banned the use of the fuel on ocean-going ships, in an effort to reduce noxious gases and fine particle pollution. But vessels can still burn it if they’re equipped with scrubbers — “exhaust gas cleaning systems” — to reduce a ship’s sulfur output. Many cruise lines have opted to do just that.

Ulrich and her peers want cruise ships to immediately switch to the “cleanest marine fuel available” — by which they mean low-sulfur distillate fuels, such as marine gas oil. These lighter petroleum products are common but generally more expensive. Those fuels, combined with soot-trapping particulate filters, could slash black carbon from ships by up to 90 percent and reduce greenhouse gas emissions, Ulrich said.

Some cruise companies are instead turning to another fossil fuel: liquefied natural gas, or LNG, which produces significantly less air pollution than bunker fuel. Prior to the coronavirus outbreak, Carnival said it planned to build 11 LNG-powered vessels by 2025, reflecting the shipping sector’s growing embrace of the fuel. But a recent study found that LNG may do little to curb the shipping industry’s greenhouse gas emissions in coming decades, mainly because of methane leaks from ship engines, as well as in its production process.

Aoife O’Leary, the London-based director of international climate for the Environmental Defense Fund believes that rather than spend billions on new fossil fuel-burning ships, cruise lines should look to invest in zero-emission fuels, such as ammonia or hydrogen. (Both of those fuels can be produced with water and renewable electricity and paired with either fuel cells or ship engines. But the infrastructure and funding needed to do so at commercial scale is still extremely limited.)

“The cruise industry is investing a lot of money in LNG ships, which probably means that, in five to 10 years, when you can invest in an ammonia or hydrogen ship, they won’t be ready to do that,” O’Leary said.

Golin-Blaugrund, the industry spokesperson, said companies have invested over $22 billion worldwide in ships with new technologies and cleaner fuels, such as LNG, advanced wastewater treatment systems, and scrubbers. “The cruise industry,” she said, “has made tremendous progress reducing its environmental impact through the use of sophisticated technologies.”

While the industry heralds its adoption of scrubbers, green groups also called for prohibiting companies from using them in North American waters, including parts of the Caribbean and Arctic under U.S. jurisdiction.

Ship scrubbers come in several varieties, but all of them involve mixing water with exhaust gas, filtering it, and dumping the mixture overboard or in landfills. In January, the Cruise Lines International Association released a study by an independent consultant that found scrubber washwater has a “minimal environmental impact on water and sediment quality.” The results align with two other industry-backed studies that found the devices’ output is environmentally safe.

However, according to the Guardian, an internal report by the U.N.-affiliated International Maritime Organization, which regulates cruise and cargo ships, expressed “uncertainty” about such research, citing a lack of transparency. Experts say they’re particularly concerned about the dumping of polycyclic aromatic hydrocarbons, chemicals that result from the burning of everything from fuel to garbage and have been linked to multiple types of cancer.

Just like idling trucks and cars, ships running their engines while docked spew pollution into adjacent communities. A single cruise ship at berth for one day can emit as much diesel exhaust as more than 34,000 tractor-trailers, according to an independent analysis verified by the U.S. Environmental Protection Agency.

To avoid this, ships can plug into shore-side electrical power, keeping their lights and equipment running without the exhaust. Groups writing the Senate demanded that all cruise ships calling on U.S. ports be equipped to accept “shore power” by 2023, and that they must plug in where shore power is available.

A rising number of cruise and cargo ships have this capability today. Princess Cruises says it launched the world’s first shore power hookup program in 2001 in Juneau, Alaska, where its vessels connect to the city’s surplus hydroelectric power. California has made plugging in mandatory under a 2007 diesel-emissions law, and in 2018, it fined a Swiss-Italian shipping line $630,000 for repeatedly violating the rule.

But shore power still isn’t available in many places. And where plugging in is voluntary, many companies opt to burn fuel and avoid paying for costlier electricity. On the U.S. Atlantic coast, the only shore power system for cruise ships is at Brooklyn’s Red Hook terminal. Since the mechanism was installed about three years ago, cruise ships have connected to it just 30 out of 96 times at port, according to the New York Times.

As the International Maritime Organization clamps down on greenhouse gas emissions from shipping, the global cruise industry is responding with initiatives of its own. Industry members have agreed to reduce the rate of global fleet emissions by 40 percent by 2030, compared to a 2008 baseline. Royal Caribbean Cruises recently said it curbed emissions by 37 percent from its 2005 baseline. Carnival reduced its ships’ carbon intensity — emissions per passenger mile — by nearly 28 percent over a similar period.

Yet as fleets expand and ships supersize, the total amount of shipping-related emissions is poised to rise. Environmental groups said companies should strive to reduce their absolute emissions of carbon dioxide as well as methane, nitrogen oxide, and black carbon by 2030, while working to sail emissions-free cruise ships by mid-century. Further, they want all ships allowed in U.S. waters to publicly report annual emissions and fuel consumption within a year.

Ulrich of Stand.earth said that, as the coronavirus outbreak recedes and cruises resume, the industry will need to convince skittish travelers that ships are indeed safe both for passenger health and the environment. “That’s a big problem they are going to have to work very hard to recover from,” she said. “If they are going to be viable for the long term, it’s by making substantive changes to their practices and complying and exceeding the environmental standards outlined in [our] letter.”