Does New York need a new natural gas pipeline? It's about to decide. 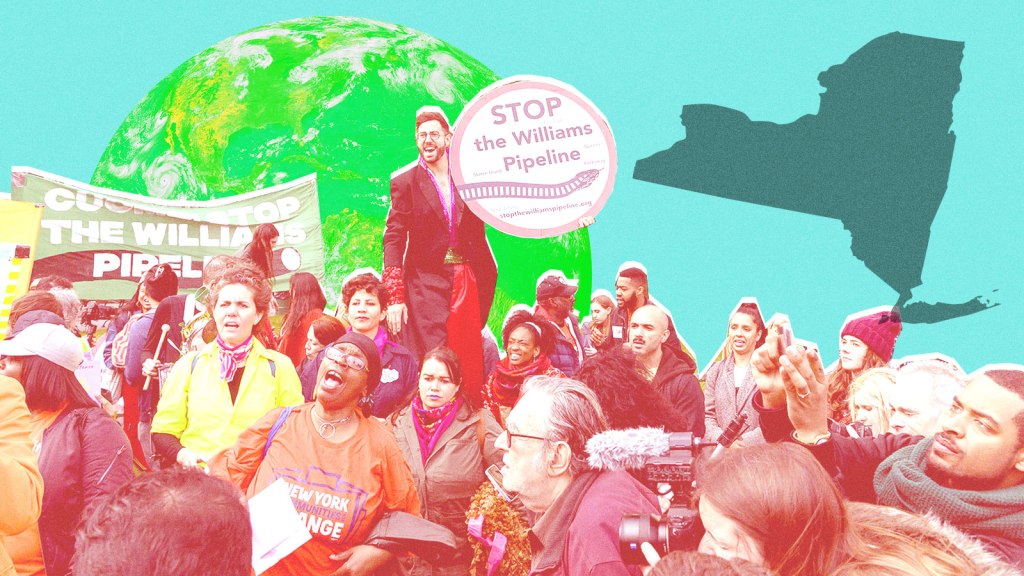 Last week, more than 100 protesters tuned into a virtual rally for a milestone push in a three-year battle against the Williams Pipeline, a controversial project that would bring a new supply of natural gas into New York City and Long Island. With individual pleas, homemade signs, musical performances, and speeches from the likes of Bill McKibben, Cynthia Nixon, and New York City Comptroller Scott Stringer, the protestors tried to summon the people power of a live event to tell New York Governor Andrew Cuomo’s administration to stop the pipeline once and for all.

“We can’t pretend we are making progress on combating climate change if we continue to build out fracked gas infrastructure that will lock in emissions for years to come,” said Stringer, who is rumored to be considering a run for New York City mayor in 2021. “Let’s finish stopping this pipeline and move on to building out a cleaner, more sustainable city.”

The rally was held ahead of the May 17 deadline for the New York State Department of Environmental Conservation to rule on a key permit for the project. The pipeline would cut through northern New Jersey and then out about 23 miles into New York Harbor to connect with the existing gas system. One year ago, the agency denied the permit on the grounds that it failed to meet the state’s water quality standards. New Jersey’s environmental agency did the same. Both rejections were issued “without prejudice,” meaning Williams could reapply — which it quickly did.

National Grid, a gas utility that operates in Brooklyn, Queens, and Long Island, would be the sole customer of the pipeline’s gas. As the fate of the project hangs in the balance, so do National Grid’s long-term plans — and, according to many observers, the fate of New York City and New York State’s climate goals. Both the city and state passed landmark laws last year that seek to drastically reduce carbon emissions by 2050. The city’s Climate Mobilization Act specifically aims to cut emissions from buildings — the majority of which come from natural gas heating systems.

After the Williams Pipeline permits were denied last summer, National Grid began rejecting new customer applications, claiming that it would not be able to meet future demand unless the pipeline was built. Real estate developments were stalled, new restaurants were left in limbo, and homeowners finishing up repairs couldn’t get the gas turned back on. The issue came to a head in November when Governor Cuomo accused the utility of extorting New Yorkers and threatened to revoke its license. The resulting settlement required National Grid to go back to the drawing board and come up with a slate of alternatives to make sure New Yorkers aren’t left in the cold if the pipeline isn’t built.

In February, before the novel coronavirus swept the country, the utility released a report with 10 ideas. One of them was the Williams Pipeline. The rest were smaller projects, none of which would alone solve the supply problem, the report said, although a scenario with some combination of them could. Most of the solutions involved building new gas infrastructure, like a liquefied natural gas terminal where gas would be delivered by tanker, or a smaller “peak shaving plant” that would store excess gas during the summer for when demand ramps up in the winter.

Some of the solutions on the menu were projects National Grid was already working on, like the construction of a new compressor station that will increase the amount of gas received through an existing pipeline. There were also three “no infrastructure” options that would expand existing programs that reduce demand for gas, like incentives for people to weatherize their homes and to replace their gas boilers with electric heat pumps. (National Grid is already required to offer these kinds of programs under New York State law.)

Critiques of the company’s report poured in from activists, environmental groups, politicians, and even the City of New York during a series of virtual public meetings the company was required to hold and in an online forum for public comments. During the meetings, National Grid President John Bruckner asserted that the company had not decided on any particular solution yet. However, some commenters felt the company’s report continued to make it seem like the Williams Pipeline was the only viable way for National Grid to avoid another moratorium, which could scare regulators into approving it. “If targets are not met, will have to restrict new gas customer connections,” the report reads, referring to potential scenarios with minimal to no new gas infrastructure.

Several groups, like the Environmental Defense Fund and NY Renews, an environmental justice coalition of more than 200 groups across New York State, criticized the company for failing to analyze the emissions impacts of each option, which would be necessary in order to evaluate whether they’re compatible with New York’s climate targets.

In comments submitted on behalf of New York City, lawyer Adam Conway wrote that adding new gas infrastructure runs counter to the city’s policies, and therefore only the “no infrastructure” options were viable tools for National Grid to address supply and demand gaps. An analysis performed by Synapse Energy Economics, a research and consulting firm, on behalf of the Eastern Environmental Law Center, alleged that National Grid’s assessment was flawed even prior to the pandemic, and that the company does not actually face an impending supply shortage. It found that the utility did not account for city and state energy efficiency and emissions reduction programs that will reduce demand for gas in the coming years.

At both the virtual meetings and among the online comments, some parties, like a nonprofit called Heartshare that provides utility grants to low-income households and the Community Development Corporation of Long Island, argued that the Williams Pipeline would be the safest option to ensure that low-income New Yorkers have an affordable way to heat their homes.

But National Grid agreed to play ball and evaluate its options again. On Friday, one week after the comment period closed, the company filed a supplemental report that incorporated some of its critics’ suggestions, including a greenhouse gas analysis and an update to the way the forecasted gap between supply and demand was calculated — which slightly reduces the projected gap. The new report narrows down the solutions and proposes two viable paths forward. Option A consists of the compressor station upgrade, a combination of “no infrastructure” measures to reduce demand, and a brand new option that was not in the original report — upgrading an existing liquified natural gas plant to increase its capacity. Option B is the Williams Pipeline.

If all of the criteria National Grid considered are given equal weight — safety, reliability, cost, compatibility New York’s climate targets — the report recommends Option A. However, if greater importance is placed on reducing risk and making sure the company can meet demand, “then the preferred choice is Option B” it says — the pipeline.

The company’s settlement with New York indicates that one of these paths will have to be decided upon by early June. Whether or not Option B is really on the table now sits in the hands of the Department of Environmental Conservation and Governor Cuomo.