New York’s Williams Pipeline is denied (but not dead) 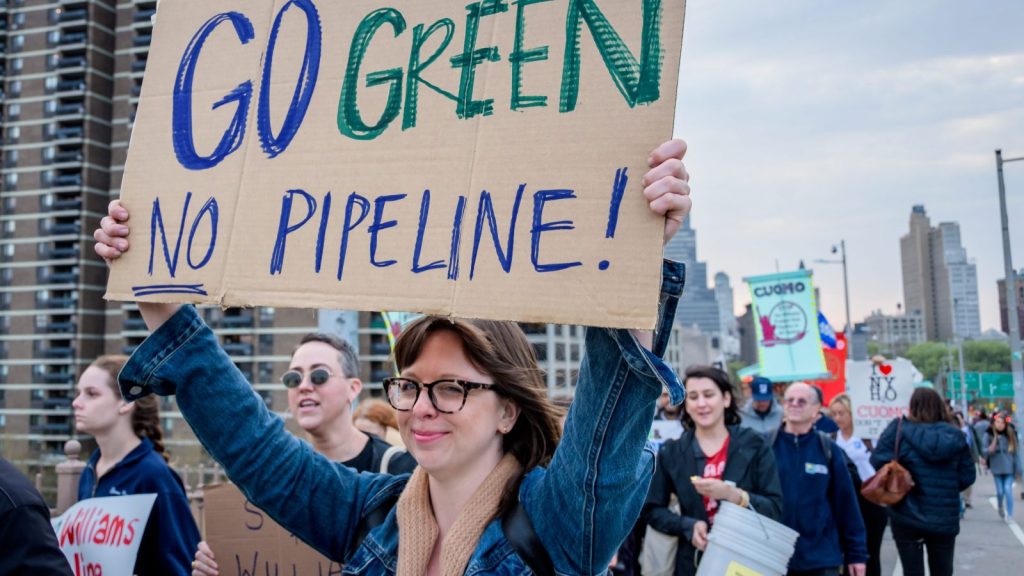 New York’s Williams Pipeline is denied (but not dead)

When Lee Ziesche heard that New York state regulators had denied the operator of the Williams Pipeline a permit it needed to begin construction, she celebrated with a hearty plate of pasta. She had been on a hunger strike for two days as one of the lead organizers of the New York-based campaign to stop the proposed pipeline, which would carry fracked natural gas from Pennsylvania to the Big Apple.

“I kind of ignored some advice that I got that you’re supposed to ease back into it with fruit,” said Ziesche, “I just went straight for the carbs covered in cheese.”

On Wednesday, the New York State Department of Environmental Conservation ruled that the pipeline proposed by Oklahoma-based operator Williams Companies would dredge up sediment and contaminants, like mercury and copper, from the bottom of the bay, compromising water quality and the health of local habitats. The project “fails to meet New York State’s rigorous water quality standards,” the department said.

The decision comes after weeks of anti-Williams protests by grassroots opposition groups, which argued the pipeline would increase New York City’s vulnerability to climate change by contributing to greenhouse gas emissions. “We have to make sure that as we’re transitioning off dirty fossil fuels to a 100 percent renewable economy, that we are protecting those most vulnerable to the climate crisis,” said Patrick Houston, an organizer with the nonprofit New York Communities for Change, which was part of the coalition pushing to stop the pipeline.

Environmental activists successfully enlisted several big names to speak out against the project. On Monday, New York City Mayor Bill de Blasio came out against the pipeline while simultaneously calling out President Trump for his New York buildings’ high greenhouse gas emissions (De Blasio announced today that he will also be running for president). Eleven members of Congress, including Representatives Alexandria Ocasio-Cortez and Jerrold Nadler, issued a letter to New York Governor Andrew Cuomo urging him to oppose the pipeline. Cuomo, however, remained tight-lipped about the project, prompting some critics to accuse him of letting financial ties to the oil industry get in the way of his renewable energy goals for the state.

The Department of Environmental Conservation received 14,000 comments from 45,000 individuals. Around 90 percent of the feedback expressed opposition to the pipeline. “I think it was the people power that made this happen,” said Ziesche. She was one of six women between the ages of 21 and 75 who held a hunger strike outside of Cuomo’s office ahead of the state’s May 16 deadline to issue or deny permits for the project.

The decision didn’t come as a win for everyone. Utility companies said that without the new pipeline, natural gas shortages could lead to additional rate hikes and moratoriums on new gas hookups, such as the stay Con Edison placed on Westchester County earlier this year. New York State Laborers, a construction workers’ union with over 40,000 members, said the decision could cost jobs if it ends up halting new gas lines. The New York Times reported that in the past year, the union has spent more than $600,000 on Facebook ads in favor of the pipeline.

New York Communities for Change organizer Patrick Houston said he wants to see a comprehensive policy coming from the governor’s office that will ensure workers aren’t left by the wayside as the state greens its economy as part of its own Green New Deal.

There will be plenty more opportunities for New Yorkers to debate the state’s energy needs — Williams Companies has already said it plans to re-submit its application for the pipeline’s construction. Williams can still get state approval if it proposes new measures to mitigate the risks outlined by regulators. “We are confident that we can be responsive to this technical concern, meet our customer’s in-service date and avoid a moratorium that would have a devastating impact on the regional economy and environment,” Williams spokesman Chris Stockton told local media.

Alternatively, Williams Companies could also try to take the state to court, as it did when New York blocked another one of its other controversial projects, the Constitution Pipeline, in 2016. That case is still tied up in courts.