Federal agencies are required to consult with tribes about pipelines. They often don’t. 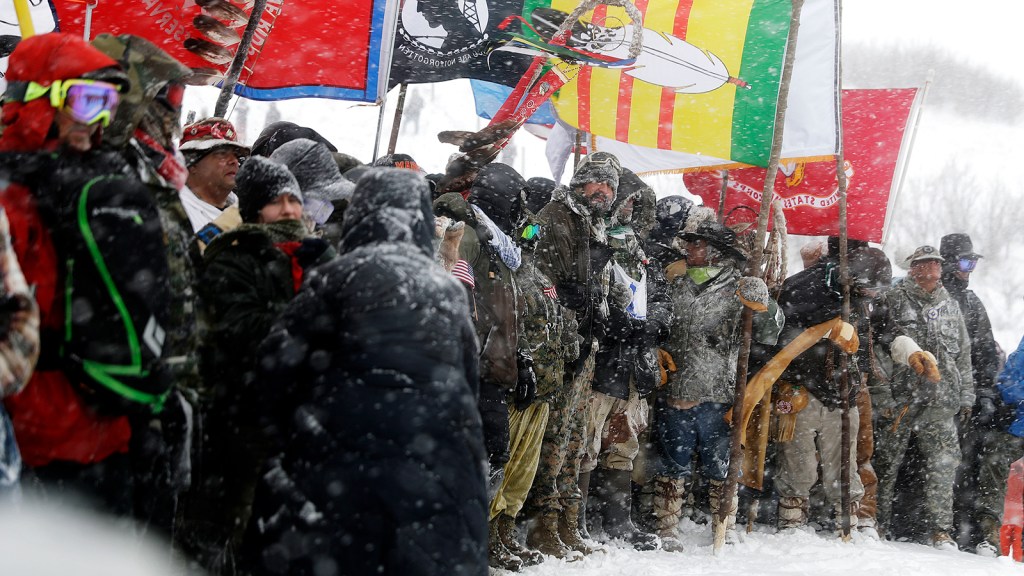 Federal agencies are required to consult with tribes about pipelines. They often don’t.

In Montana, the Keystone XL pipeline’s proposed path cuts underneath the Missouri River at the edge of the Fort Peck Reservation’s southwestern border. The Fort Peck Reservation is home to several bands of the Assiniboine and Sioux tribes, and a spill from the pipeline could contaminate their main source of drinking water.

Federal agencies are required by law to work with Native American tribes that might be affected by oil and gas projects. But there hasn’t been a single public hearing on the Fort Peck Reservation yet, even though the pipeline has been a source of controversy for about a decade.

There are similar stories in Virginia, New Mexico, and elsewhere across the country, according to Indian law experts tracking oil and gas projects. Tribal officials say they try to contact federal agencies and don’t hear back, or that agencies make key decisions before contacting them. Sometimes an agency sends letters asking for tribes’ input to the wrong address or never contacts them at all.

“It’s very inconsistent,” said Marion Werkheiser, a founding partner at the law firm Cultural Heritage Partners, which works with tribes, developers, and local governments on cultural and historic preservation. “It’s difficult for tribes to know what to expect when they get into the process because some agencies are not fulfilling their obligations.”

The Monacan Indian Nation, a federally recognized tribe that Werkheiser represents, sent several letters in 2019 to the Federal Energy Regulatory Commission, the agency responsible for approving an extension of the Mountain Valley Pipeline through southern Virginia and central North Carolina. They’re worried about protecting burial sites and cultural resources along the pipeline’s route. But the agency hasn’t responded, Werkheiser said.

Last year, the Bureau of Land Management announced that it’s considering leasing land near the Chaco Culture National Historical Park in New Mexico for oil and gas leasing. In a letter to the agency, Brian Vallo, governor of the Pueblo of Acoma, said that at the time nearby tribes had not been notified about it. He also said that calls by tribal members to local field offices went unanswered.

The Government Accountability Office contacted officials from 57 tribes about their experience working with the federal government and laid out a range of problems in a report last year. It found a lack of communication between agencies and tribes, a lack of respect for tribal sovereignty, and little accountability. That’s despite requirements to “consult” with tribes enshrined in two federal laws as well as executive orders by presidents Bill Clinton and Barack Obama.

A majority of comments from tribes reviewed by the GAO noted that agencies often failed to identify all the tribes that could be affected by pipelines and other projects. Agencies also undercounted traditional plants and sources of food in the path of projects. Tribal officials said that was partly because the agencies often relied on archaeologists who weren’t aware of them. When tribes did provide input, it was often ignored, leading to the perception that “agencies consult to ‘check the box’ for procedural requirements rather than to inform agency decisions.”

In the summer of 2018, officials from the Assiniboine and Sioux tribes of Fort Peck wrote to the State Department, the agency responsible for approving the pipeline because it crosses the U.S.-Canada border. The letter outlined the threats the pipeline posed to a water treatment system that pulls water from the Missouri River downstream of the proposed pipeline crossing. It is the only source of public water for roughly 20,000 people on the reservation and in surrounding areas. Yet when the State Department published a 648-page draft environmental impact statement for the project in October, it gave two paragraphs to the water system’s importance to the Fort Peck tribes.

Bill Whitehead, chairman of the Water Commission for the Assiniboine and Sioux Rural Water Supply System, said the State Department had met with tribal officials but argued that the officials failed to adequately consider tribal concerns about the pipeline’s crossing under the Missouri River. The crossing is also immediately downstream of the Fort Peck Reservoir, a dam that holds back trillions of gallons of water. When water is released it could put tremendous pressure on the pipeline, he said.

The State Department has also held no public meetings on the reservation. The most recent meeting in Billings in October “was a sham,” Whitehead said, because those who wanted to provide comment were directed to stenographers, instead of being allowed to testify in front of agency staff and other commenters. “Our responsibility now is to protect [the water system],” he said. “Our state-of-the-art water treatment facility is not designed to process tar sands coming through.”

Daniel Tripp, a State Department spokesperson, said the agency had “conducted a broad range of tribal consultations,” including meetings and discussions by letter, phone, and email. A worst-case scenario analysis in the draft environmental impact statement considered the downstream effects of an accidental spill up to 40 miles. The intake for the Fort Peck water system is 57 miles downstream. It is “extremely unlikely” tar sands from the pipeline would reach the intake, Tripp said. As for why the department limited its analysis to just 40 miles downstream, Tripp said the final version of the environmental impact statement, expected in 2020, will provide additional details.

According to Montana State Senator Frank Smith, the Army Corps of Engineers, which is also involved in issuing permits for the Keystone XL pipeline, notified him at the very last minute about a meeting with the Fort Peck tribes two days before Thanksgiving. Smith, a member of the Sioux tribe who lives on the Fort Peck reservation, was several hundred miles away at the time and wasn’t able to attend. The meeting did take place, but Smith said turnout was low as a result of the impending holiday.

Joel Ames, a tribal liaison for the Army Corps, said the November 26 date had been picked weeks in advance. Any confusion was a result of miscommunication within the tribe, he said.

The GAO report noted that officials from 13 of the 21 federal agencies surveyed said understaffing and a shortage of financial resources were major barriers to fulfilling requirements to consult tribes. They also noted that they had trouble identifying the right tribes to contact, and when they did, often struggled to find accurate contact information for them.

Ryan Emanuel, an associate professor at North Carolina State University and a member of the Lumbee tribe, said that when consultation does occur, it often takes place too late. For instance, Emanuel said some tribes were first made aware of the Atlantic Coast Pipeline when they were sent a draft of the environmental impact statement, a report that the agency would later rely on to determine whether to allow construction of the pipeline. By then, the Federal Energy Regulatory Commission, the agency responsible for assessing the pipeline’s environmental impact, had already decided what would and wouldn’t be included in the impact statement, he said.

Technical staff who work for federal agencies often don’t have expertise on tribal issues, Emanuel said. Without input from tribes, companies and federal agencies can end up including inaccurate information about natural resources and sites of cultural significance. FERC’s draft environmental impact statement for the Mountain Valley Pipeline extension, for example, contains many inaccuracies about the Monacan Indian Nation’s history, according to Werkheiser, an attorney for the tribe. Surveys and research about cultural resources in the pipeline’s path also relied on outdated studies, she said. FERC then relied on that information in producing the environmental report, perpetuating the errors.

“When it comes to historic preservation, [federal agencies] put those concerns last,” said Werkheiser. “They make it an afterthought.”

Celeste Miller, a spokesperson for FERC, said that agency staff met with Werkheiser last January and that the Monacan Indian Nation’s concerns will be addressed in the final environmental impact statement, expected to be published next month. As for the Atlantic Coast Pipeline, Miller said that the agency began reaching out to tribes when it announced it would issue an environmental report for the pipeline.

In 2017, Victoria Tauli-Corpuz, the United Nations Special Rapporteur on the rights of indigenous peoples, met with tribes in the United States to assess the U.S government’s relationship with tribes and the risks of fracking and mining on tribal lands. She found that the framework for tribal consultation “suffers from loopholes, ambiguity, ad hoc application on an agency-by-agency basis and a general lack of accountability.” As a result, she wrote, tribal governments are “unable to participate in meaningful dialogue on projects affecting their lands, territories and resources.”

Werkheiser and Emanuel said that companies have much to gain from engaging with tribes and building a relationship with them before embarking on the permitting process with state and federal authorities. Early environmental assessments of the Dakota Access Pipeline in North Dakota ignored the Standing Rock Sioux Reservation and the tribal lands that it would cross, they said. The protests against the pipeline, which garnered national attention, began because tribal members felt their concerns about the pipeline weren’t being addressed.

By working with tribes early on, companies may be able to find alternative routes and minimize the effects on resources important to tribes, Werkheiser and Emanuel said. Failing to work with them can also lead to lawsuits.

“There’s a perception that this is an adversarial process,” said Emanuel. “I wish that they would see tribal governments as resources to help them make better informed decisions rather than adversaries that are going to contradict or resist.”