From the Passyunk Avenue Bridge in South Philadelphia, the view to the southeast is dominated by a massive oil refinery that once produced more petroleum products than any other on the U.S. East Coast. But the complex is now permanently closed because of a catastrophic explosion and fire in June 2019, and the subsequent bankruptcy of its former owner, Philadelphia Energy Solutions.

The refinery, which began operating in 1870, was notorious as the largest single source of air pollution in the city, and for years it was blamed by nearby residents — many of them Black and poor — for high rates of asthma and cancer. They have also accused successive owners of excluding them from decisions that could affect their lives, and of providing few jobs to the surrounding community — important concerns for environmental justice, which seeks to ensure that low-income and minority communities are not subjected to environmental conditions like poor air quality.

Now that the site has been purchased by a developer that plans to turn it into a giant logistics center rather than restarting a refinery, residents of the so-called fence-line communities — including Grays Ferry, Point Breeze, and Eastwick — are cautiously welcoming the sale as the chance to clean up a notorious source of pollution and build a more positive relationship with their industrial neighbor.

“I was happy, I thought finally we don’t have to smell that bad air,” said Carol Foy, who has lived in the Grays Ferry neighborhood for more than 50 years, recalling the June 2020 sale for $225.5 million to Chicago-based Hilco Redevelopment Partners. The company, which specializes in redeveloping large, obsolete industrial sites, promised not to restart the refinery, to clean up the parts of the complex where it is responsible for the pollution, and to create more jobs for local people who live near the plant.

The Philadelphia project is one of many around the U.S. that are converting contaminated industrial complexes into distribution centers to meet skyrocketing demand from e-commerce and online shopping. They include the PJP Landfill site in Jersey City, New Jersey, where chemical and industrial waste led to a cleanup under the Environmental Protection Agency’s Superfund program, and which is now occupied by warehousing and other facilities. In Los Angeles, the Del Amo Superfund site, which previously hosted a synthetic rubber plant, now houses businesses — including warehousing — that employ more than 5,000 people. And in Baltimore and Chicago, Hilco is converting former industrial sites that once housed a Bethlehem Steel plant and a coal-fired power plant.

In South Philadelphia, Foy, 68, said there was a time when she and her neighbors would have to shut their doors and windows to protect themselves from regular releases of choking gases from the refinery.

“In the 80s and 90s, this whole area was filled with purple or red smoke about once a month,” she said in an interview on the porch of her townhouse about a quarter-mile from the refinery. “The smoke was so bad, you couldn’t sit outside and you couldn’t turn on your air conditioning. It smelled like rotten eggs.” 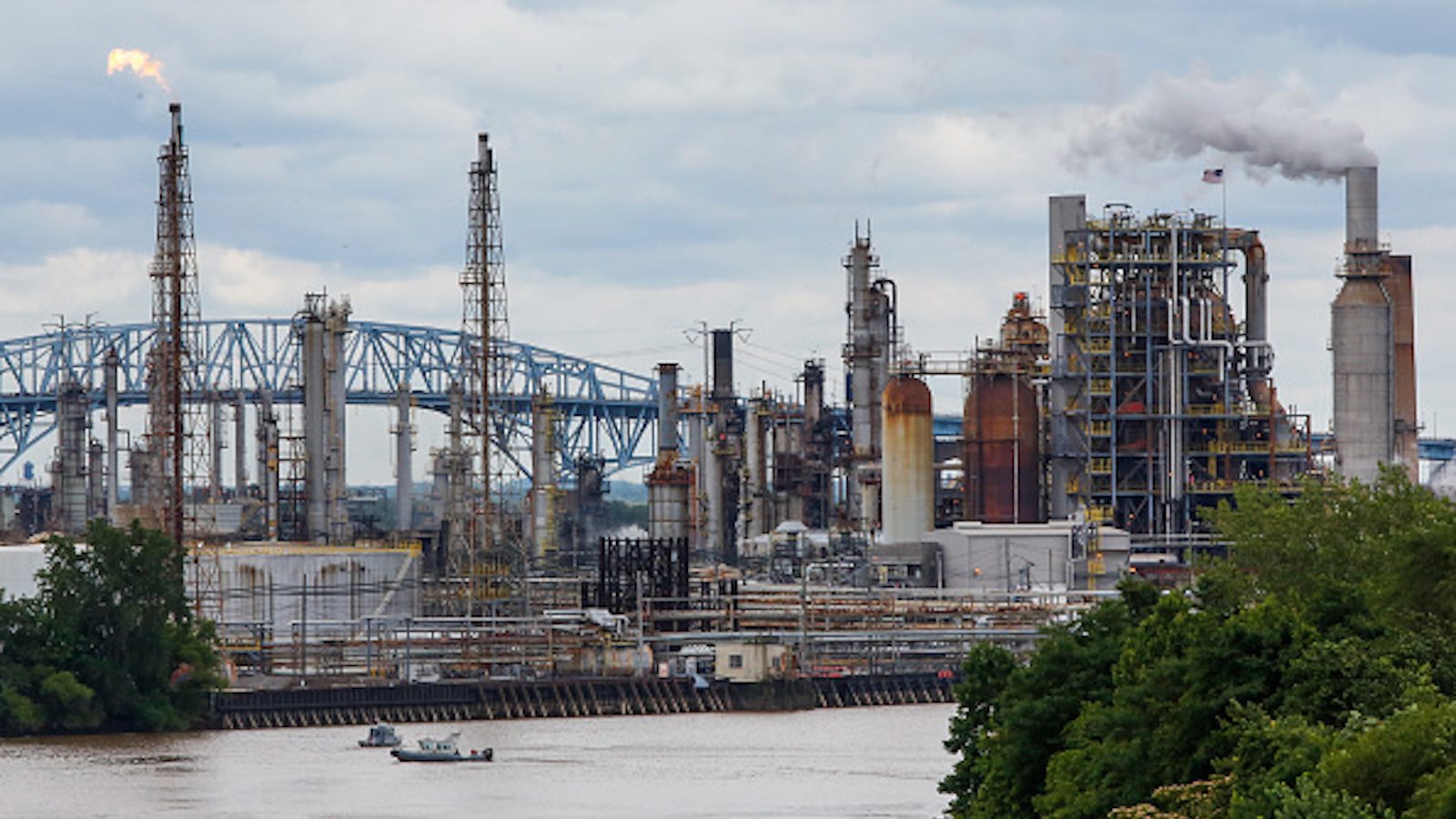 Foy blames pollution from the refinery for the illnesses that have affected neighbors and members of her family, including for the death of her son from cancer at the age of 33, and for the asthma that affects both her and her daughter.

Now, redevelopment of the site offers the prospect of more jobs for the community as a result of the giant distribution complex — containing as much as 15 million square feet of warehouse space — that Hilco plans to build over the next decade. The company has said that it expects to create 13,000 jobs during demolition of the old site and construction of the new, and that the logistics and transportation hub could eventually employ 19,000 people.

To prepare the site for about a dozen new 1 million square-foot warehouses, Hilco will demolish the refinery’s infrastructure, removing 950 miles of existing pipes and 30,000 tons of material containing asbestos, as well as 850,000 barrels of “tank product” such as hydrocarbons and residual fuels. In all, demolition and cleanup is expected to take about seven years.

Under the sale agreement, Hilco has committed to removing soil and water contaminated by its predecessor, Philadelphia Energy Solutions, which bought the site in September 2012. Pollution left by the previous owner, Sunoco, is being cleaned up by its remediation unit, Evergreen Resources Group.

Despite the planned remediation, Foy is worried that toxins such as benzene and lead created by more than a century of refining may be contained onsite rather than removed, and that she and her neighbors will continue to be exposed to the residue of the refinery even though they no longer have to breathe its bad air.

“It’s still a concern — they should move it all,” she said. “The ground is still going to be poisoned. After years and years, this stuff could start coming loose. I think they should go ahead and clean it up, not just bury stuff underground.”

Jeremy Grey, Hilco’s executive vice president for industrial development, said the company’s remediation is focused on “removal of liquid petroleum substances from the subsurface.” He said Hilco expects to remove these liquid contaminants rather than containing them onsite by “capping,” such as using impervious barriers to prevent their spread. Contaminants include benzene, the former gasoline additive MTBE, toluene (a toxic hydrocarbon), and lead, according to a report by Evergreen, which has divided the refinery site into 11 “areas of interest” for cleanup.

Tiffani Doerr, a spokesperson for Evergreen, said that its portion of the cleanup will be going on for “many years to come” and that capping is one of a number of techniques that will be considered as the remediation proceeds.

In a public comment period that ended on January 14, the Clean Air Council — a Philadelphia-based environmental group that has been advocating for high environmental standards at the future site — strongly criticized the Evergreen report. It called Evergreen’s assessment of the site “fundamentally flawed” because of insufficient analysis of the soil and groundwater pollution, including the nature and extent of contamination of two aquifers beneath the site.

Joe Minott, the council’s executive director, said the site remains a danger to nearby residents. “The council believes the contaminated site is a harm to the community even if air emissions are not the same as they were historically,” he said. Whether Hilco will reverse decades of environmental injustice will depend on how thoroughly the site is cleaned, whether more local people are hired to build and operate the new warehouses, and whether the new owner genuinely listens to the community’s concerns, he said.

“If I were a member of the community that had been impacted for three generations of my family, and you say ‘You’re not going to be exposed to these pollutants any more,’ I would say that’s not enough, that doesn’t make me whole,” Minott said. “There’s a history here that you have to acknowledge, and you have to address in some way.”

Jerry Kauffman, director of the Water Resources Center at the University of Delaware, said capping contaminants will never be as good a solution as removing them, but capping — if done properly — can prevent the spread of industrial pollutants and protect surrounding residents. Some techniques, such as building clay walls, should prevent the migration of leaded gasoline or benzene, for example, into the Schuylkill River, which flows down the west side of the refinery site, Kauffman said.

Other remediation measures include removing the refinery infrastructure, excavating the surface soil that’s most heavily contaminated, and then putting down an impermeable layer of clay in combination with geotextiles, Kauffman said. “It costs millions and millions of dollars, but this is the magnitude of the problem,” he said.

Hilco has proposed measures that it says will satisfy many of the community’s concerns. In a draft “Declaration of Community Benefits,” the company describes its plans to remove pollutants, create local jobs, minimize truck traffic during construction, and discuss its plans with the community. The company also vows to prioritize the hiring of residents from five ZIP codes around the refinery site and to pursue environmental improvements like installing solar panels on the complex’s roofs and building electric vehicle charging stations.

Hilco has also hired Jasmine Sessoms, who grew up in the Point Breeze neighborhood adjoining the refinery, as its liaison with the community. Sessoms, a former government relations officer for the Community College of Philadelphia and now Hilco’s senior vice president for corporate affairs at the Philadelphia project, said the refinery was a polluter and a “cause of pain” for nearby minority communities, but that Hilco is going to change that.

“We want to become part of the neighborhood,” she said. “We cannot build a full-on neighborhood in South Philadelphia without … the community that had to grow up and live with the refinery. We want their input in every step of the process, and we want to incorporate it within our plan.”

Sessoms said the company’s plan to forge strong links with the community is consistent with its approach to other projects around the country, such as Exchange 55 in Chicago, where Hilco is redeveloping the site of a former coal-fired power station.

But Edith Tovar, an activist who works with the mostly Mexican community in the Little Village neighborhood around the site, said Hilco’s creation of a logistics center there will result in replacing air pollution from the power plant with diesel emissions from a procession of trucks serving the center. 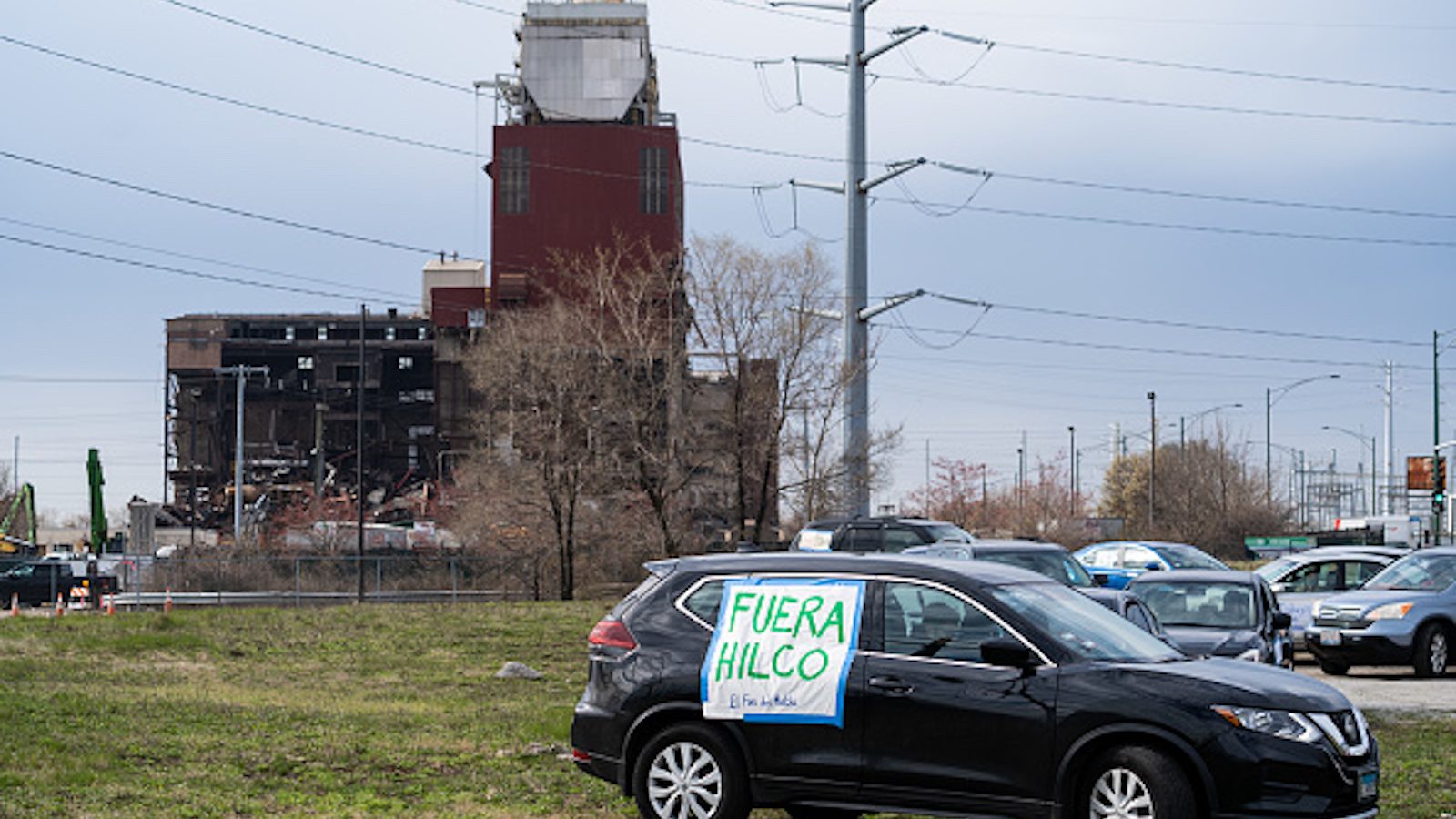 Tovar said Hilco gave the community little notice when it imploded a smokestack from the old power plant in April 2020, filling the neighborhood with dust. “After the implosion of the smokestack, they are busy handing out their propaganda, and greenwashing the project,” she said. “We want to look at other ways we can use that warehouse rather than having diesel trucks coming in and out.” Her group wants to see more solar power and more green infrastructure, such as rain gardens, on site

Hilco’s Grey said the Chicago project will bring “thousands” of jobs to the area and feature the city’s largest solar installation, chargers for electric vehicles, and landscaping that includes planting 700 trees. “We are confident that this is something the community will be extremely proud of,” he said.

Hilco also has redeveloped an old industrial site near Baltimore, creating a major transportation and logistics center on 3,100 acres once owned by Bethlehem Steel. Hilco says the site currently employs 8,500 people and is expected to contribute 1 percent of Maryland’s GDP by 2025.

In Philadelphia, City Councilman Kenyatta Johnson, whose district includes the Hilco site, said the project has significant economic potential for America’s poorest big city, where about one in four residents live at or below the federal poverty line. But he said he needs commitments by Hilco to address long standing environmental justice issues, such as diversity and local hiring, before he introduces legislation to change zoning at the site to allow for non-industrial uses like shops and restaurants.

“I will be introducing legislation, but not at the moment,” he said. “We have a long way to go as relates to community engagement, as well as paying attention to the environmental remediation process. We have to get this right the first time around.”