Oil and gas emissions are reversing progress from coal's decline 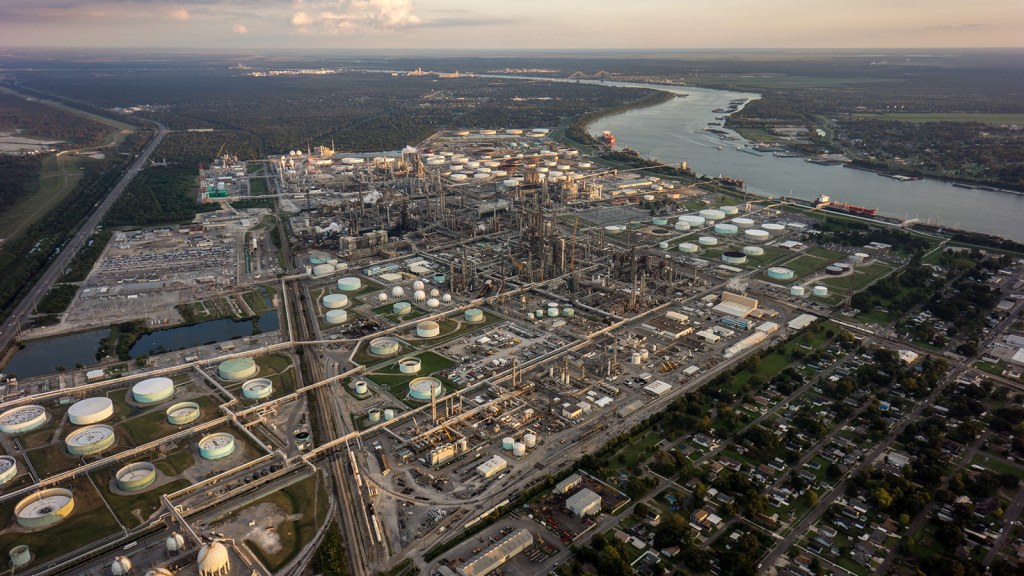 Oil and gas emissions are reversing progress from coal’s decline

Arizona’s Navajo Generating Station, a gargantuan coal plant responsible for more than 16 million tons of greenhouse gas emissions per year, shut down in November. Its closing capped a decade in which coal generation in the United States was cut in half — a development recently credited with reducing nationwide greenhouse gas emissions by 2 percent last year.

But thanks in large part to the booming oil and gas industry, that slight decline in emissions is likely just a blip on the radar. Emissions from a single proposed petrochemical complex in Louisiana’s St. James Parish, for example, would replace the lion’s share of the greenhouse gas pollution prevented through closing the Navajo Generating Station. Once built, the $9.4 billion Formosa plastics plant is expected to release more than 13.6 million tons of greenhouse gases per year.

The St. James facility is just one of dozens of new polluting plants expected to contribute to ballooning emissions from the U.S. oil and gas industry in the coming years. According to a new report published Wednesday by the Environmental Integrity Project, or EIP, a nonprofit in Washington, D.C., the industry is slated to pump an additional 227 million tons of planet-warming gases into the atmosphere in 2025 — a 30 percent increase over 2018 emissions — bringing its total emissions close to one billion tons per year. That’s equivalent to the full-time greenhouse gas pollution of well over 200 major coal-fired power plants.

About 60 percent of that rise is from expanding fossil fuel drilling, new liquified natural gas plants, and other additional oil and gas infrastructure. The remaining increases in emissions are expected to come from refineries and chemical plants that process crude oil and natural gas into gasoline, plastics, fertilizers, and other products.

Those emissions “would eat up more than half of the reductions that we expect to get out of the power sector,” said Eric Schaeffer, executive director of the EIP. “We need to get on top of the runaway growth in greenhouse gas emissions from oil, gas, and petrochemicals and get standards in place to restrain that growth before it’s too late.”

The report is based in part on historical emissions data submitted to the EPA by oil and gas producers. To estimate future emissions, the EIP used the industry’s permit applications for new facilities as well as the Energy Information Agency’s projections for future fossil fuel production.

Scientists have warned that global temperature rise must be limited to well below 2 degrees Celsius (3.6 degrees Fahrenheit) to avoid catastrophic damage to the planet — a target adopted by the countries signing on to the 2015 Paris climate agreement. For its part, the U.S. agreed to reduce carbon emissions by 26 to 28 percent from 2005 levels by 2025. As another new report from the research firm the Rhodium Group underscores, the U.S. is nowhere close to meeting that goal. (The Trump administration has also announced that it plans to withdraw from the agreement.)

The vast majority of new oil and gas emissions are expected to occur in states that have seen a fracking boom in the last decade, including Texas, Louisiana, Oklahoma, North Dakota, and Pennsylvania. The Permian Basin in Texas and New Mexico is expected to be a particularly outsized source of emissions. The oilfield has become the most productive in the world, surpassing the Ghawar field in Saudi Arabia and accounting for about half of U.S. oil production.

Schaeffer said that new operations planned for the Gulf Coast — primarily in Texas, Louisiana, and Mississippi — will account for three-quarters of the oil and gas industry’s overall emissions growth. Emissions from liquified natural gas plants are projected to increase tenfold, with 15 of 19 new plants emitting a combined 68 million tons of new greenhouse gases per year planned for those three states.

Schaeffer cautioned that the numbers projected by the EIP are most likely underestimates. For one, the report only tallies emissions from the largest facilities that are required to secure permits under the Clean Air Act. “There are thousands of smaller [facilities] that aren’t picked up in our numbers — compressor stations, tank batteries, big storage terminals, gas processors, and so on,” Schaeffer said.

There are also signs that companies are underreporting emissions data. As oil and gas producers run out of pipeline capacity to transport fossil fuels from drilling sites to refineries and markets, they’re increasingly burning it off into the air in a process called flaring. Companies operating in the Permian Basin reported flaring about 1.37 million tons of natural gas in 2017, but independent satellite analyses by environmental groups and research firms indicate the actual number is about double that. Similarly, emissions from accidents — like the massive 2016 Aliso Canyon leak in southern California — and other malfunctions and maintenance activities are either not reported or are undercounted, the report noted.

Many states where the oil and gas boom is underway have a long record of lax enforcement. In Texas, for instance, the state environmental agency failed to penalize 97 percent of unauthorized emissions between 2011 and 2016, and Louisiana’s environmental regulator issued just $1.6 million in fines last year — its lowest level in two decades. That might be a result of dramatic cuts to these agencies’ budgets. According to a separate analysis published by the EIP in 2019, state environmental agencies in both states had their budgets slashed by 35 percent from 2008 to 2018.

“Overall state spending went up over the same period, while the environmental agency spending and staffing continue to fall,” Schaeffer said. “Those are political choices.”