The Atlantic Coast Pipeline can cross under the Appalachian Trail, the United States Supreme Court ruled on Monday. By a 7 to 2 margin, the court reversed a lower court’s decision and upheld a permit granted by the U.S. Forest Service that the project’s developers could tunnel under a section of the iconic wilderness in Virginia.

The court took the case after Dominion Energy, one of the largest utilities in the South, appealed a Fourth Circuit Court of Appeals ruling last year that said the U.S. Forest Service violated federal law when it approved the pipeline to cross the Appalachian Trail. The issue, the lower court ruled: It was the National Park Service’s call to approve that request. (Dominion, based in Richmond, Virginia, is the lead developer on the Atlantic Coast Pipeline, or ACP, project; North Carolina utility Duke Energy, as well as Southern Company, also own shares.)

The case looked at whether the Forest Service had authority under the Mineral Leasing Act to grant rights-of-way within national forest lands traversed by the Appalachian Trail. “A right-of-way between two agencies grants only an easement across the land, not jurisdiction over the land itself,” Chief Justice John Roberts wrote for the court’s opinion. So the Forest Service had enough authority over the land to grant the permit. The dissent, by Justices Sonia Sotomayor and Elena Kagan, argued that the “outcome is inconsistent with the language of three statutes, longstanding agency practice, and common sense.”

According to The Washington Post, the plaintiffs in this case, both Dominion and the Forest Service, had argued that other pipelines cross the Appalachian Trail a total of 34 times. “The Atlantic Coast Pipeline will be no different,” Dominion said in a statement after the decision. “To avoid impacts to the Trail, the pipeline will be installed hundreds of feet below the surface and emerge more than a half-mile from each side of the Trail.”

The decision could set an important precedent for public lands, said Greg Buppert, senior attorney for the Southern Environmental Law Center, or SELC, which is involved in multiple lawsuits against the pipeline. This particular Appalachian Trail section on federal land, which is remote, rugged, and wild, “deserves the highest protection the law provides,” according to Buppert. But this ruling likely signals to developers of the 300-mile Mountain Valley Pipeline that they could have an easier time crossing under the trail at a separate location in Virginia; attorneys for the nearly-complete project called it a “key missing link,” the Roanoke Times reported.

Though this decision is significant, it doesn’t determine the ultimate fate of the Atlantic Coast Pipeline. While the Supreme Court has granted the Forest Service the ability to allow the project to cross the Appalachian Trail, the Fourth Circuit Court of Appeals’ striking down of the Forest Service’s permit still stands. Dominion is required to look at other routes that avoid parcels of protected federal land, and the Forest Service is prohibited from approving a route across these lands, if reasonable alternatives exist, according to Buppert. 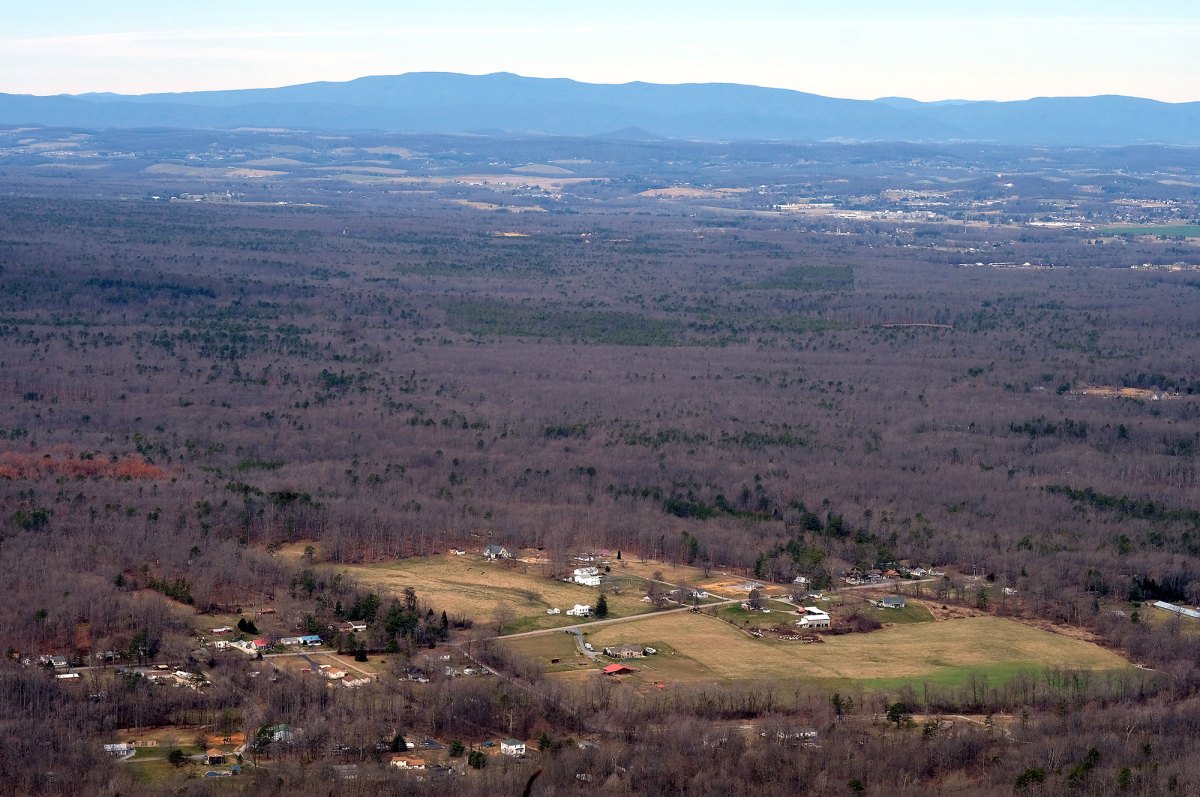 The view west along the Appalachian Trail at Cedar Cliffs, in Virginia, where the Atlantic Coast Pipeline would be tunneled under the historic trail and the Blue Ridge Parkway. Norm Shafer / Getty Images

Dominion still requires eight more permits for the 600-mile pipeline route, including an air pollution permit from Virginia regulators for a controversial compressor station in Union Hill, a historically black community. It also still needs approval to cross the scenic Blue Ridge Parkway and a new biological opinion from the U.S. Fish and Wildlife Service about endangered species that were not taken into consideration in the original environmental impact statement. Several landowners along the route through West Virginia, Virginia, and North Carolina are also still fighting to retain their property from eminent domain claims.

That means five-and-a-half years after the project was proposed, Buppert said, “there’s significant uncertainty about what the ACP route even is right now.”

In addition to crossing protected federal lands, the current route traverses steep mountains and many rural, low-income areas and communities of color, including Union Hill, a town settled by freed slaves after the Civil War. “These risks were known when it was proposed, but developers elected to push it forward anyway, and used political pressure on agencies to move their permits through faster,” Buppert said. “Not surprisingly, those haven’t withstood judicial reviews.”

Dominion spokesperson Samantha Norris did not respond to specific questions about the route, but said in an email the company is “working diligently with the agencies to resolve our pending permits so we can resume construction later this year” and complete it by 2022. “We remain fully committed to the project for the good of our economy and to support the transition to clean energy,” she said. “And we do not anticipate any changes to the route.”

Construction officially halted in December 2018 over the Appalachian Trail permit, with less than 10 percent of the pipeline in the ground. Opponents applauded that development, but continue to report problems with some construction sites. On behalf of 15 environmental and community groups, SELC lawyers filed a motion on June 1 asking the Federal Energy Regulatory Commission, or FERC, to supplement its environmental impact statement from its 2017 approval of the pipeline. The motion states that “substantial erosion, sedimentation, and slope failures have occurred” along the route, and that FERC needs to take climate change and other issues into account in updating its assessment.

The U.S. is in the midst of a historic pipeline boom to create infrastructure for the excess stores of natural gas coming from shale regions in Appalachia and West Texas, and FERC has historically approved nearly every pipeline project that has come across its desk. Despite massive protests breaking out in 2016 to try to stop the Dakota Access Pipeline passing through the Standing Rock Sioux Reservation, dozens of new pipeline projects across the country are still being proposed, FERC is still approving them, and state lawmakers have passed laws to crack down on anti-pipeline demonstrations.

Opponents of the Atlantic Coast Pipeline have been fighting the project for six years and have won several important legal cases recently. A federal appeals court last month rejected the Trump administration’s request to revive the Army Corps of Engineers’ nationwide permit program for new oil and gas pipelines. The ruling prohibits the agency from allowing companies to fast-track projects by obtaining a single permit for all its water crossings, rather than individual permits for each one. The decision could further delay the Atlantic Coast Pipeline, which had its nationwide water crossings permit suspended in 2018. The project has over a thousand stream, river, and wetland crossings. In the Calfpasture River watershed in Virginia alone, Buppert said, the current route includes 71.

The community of Union Hill has also successfully challenged part of the project on the grounds that it could cause negative public health impacts. Developers plan to build one of three pipeline compressor stations — which keep natural gas flowing through the pipe — there. In January, a federal court ruled Virginia’s Air Pollution Control Board’s review of the station was “arbitrary and capricious.” The judge overturned the permit, saying the “failure to consider the disproportionate impact on those closest to the compressor station resulted in a flawed analysis.” She, along with two of her colleagues, ordered the board to reconsider the case.

Members of the community group Friends of Buckingham County, where Union Hill is located, are concerned residents lack enough information about Dominion’s new air permit application — especially during the COVID-19 pandemic — since many lack broadband access. Chad Oba, one of the group’s organizers, said they are focusing on longer-term solutions, too, like making sure the board is well-versed in environmental justice issues. (In addition, they want to keep the board apolitical: In 2018, Virginia’s Democratic governor, Ralph Northam, removed two regulators from the board who were leaning against the permit).

The pandemic has also thrown a wrench in the work of Friends of Nelson County, another Virginia group that opposes the pipeline. About 45 miles of the Appalachian Trail cross through the county; this the contested crossing is on its border in the Blue Ridge Mountains. “The most important thing we do is to inform and educate the public about all dimensions of the pipeline and related matters,” said president Doug Wellman. The organization does a lot of in-person outreach at farmers’ markets and public meetings. Now they’re trying to do it all virtually. Later this year, they plan to launch a major campaign about the major potential dangers of the pipeline, including primers on landowner rights and eminent domain.

Due to the delays in its construction, the Atlantic Coast Pipeline’s price tag has swelled by at least $3 billion to a total of $8 billion. Since federal regulators allow pipeline companies up to a 14 percent return on investment, payable by its customers, Dominion and Duke, who are the buyers of the natural gas in addition to being the project’s developers, can turn a profit by passing construction costs onto ratepayers in a region where they have monopolies.

These costs “will take decades to recover,” said Ryke Longest, co-director of the Environmental Law and Policy Clinic at Duke University. And while they wait to be made whole, utilities like Dominion will eschew investing in other programs like energy efficiency and renewables, even as states in the region, including Virginia and North Carolina, move forward with clean energy and climate change legislation.

“The real problem with the structure of our energy system is that it encourages large-scale construction projects,” Longest said. “It’s not thinking of energy as a public service business, which is what it’s supposed to be.”

Lyndsey Gilpin is Durham, North Carolina-based journalist and the editor of Southerly, an independent, non-profit media organization that covers the intersection of ecology, justice, and culture in the American South.