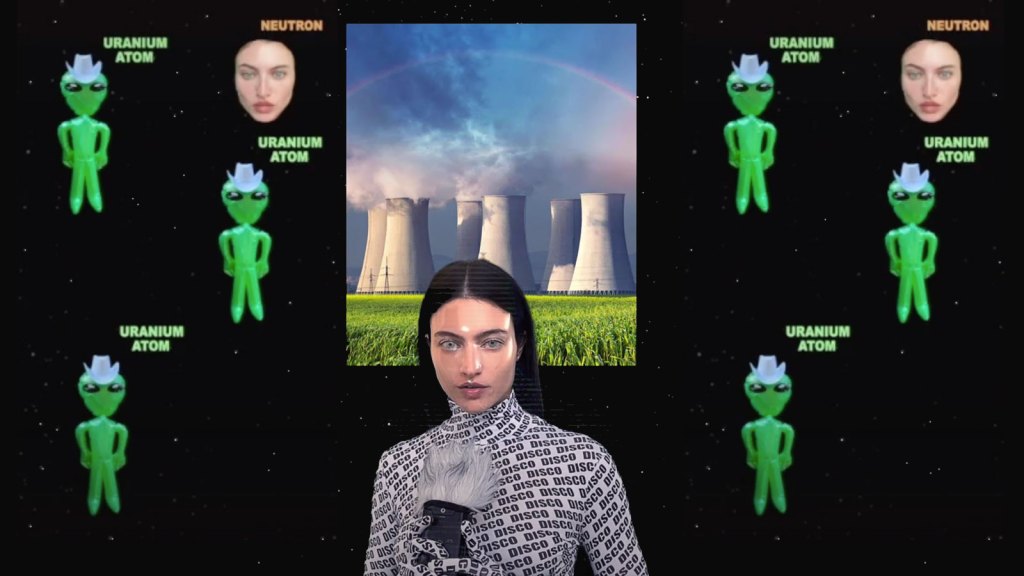 Isabelle Boemeke is the world’s first nuclear energy influencer, and she wants you to know she is not a shill.

The 30-year old Brazilian model, who lives in California, began hailing the benefits of nuclear energy and decrying nuclear plant closures all across her social media accounts in February. On Instagram, where she has more than 29,000 followers, her posts suddenly pivoted from photo shoots and Met Ball galas to energy memes, interviews with nuclear scientists, and surreal videos about the small size of uranium pellets.

in which I talk about the density of uranium pic.twitter.com/42downmuMx

Performing under her otherworldly alter-ego, “Isodope,” Boemeke makes videos that play on popular influencer tropes of makeup tutorials and exercise routines — then she pulls a bait-and-switch on the viewer. One moment you think you’re in for a model’s skincare advice, the next she’s showing you her favorite plant-based serum called “When A Nuclear Plant is Shut Down, it is Replaced by Fossil Fuels.”

That formula resonated with people. Her videos started going viral on Twitter, where they have been retweeted over a thousand times, including by physicists and other esteemed denizens of the #energytwitter sphere. And very quickly, Boemeke began fending off questions about who was paying her.

But the force behind Boemeke’s abrupt shift to energy influencer was simply climate change. “I feel like last year was the first time where we could see climate change,” she said. “Maybe that isn’t the case. But it felt that way to me. And I just had this intrinsic motivation to do something about it.”

Well, that, plus, her agents had been putting pressure on her to become a “content creator.” But Isodope wasn’t exactly what they had in mind.

Boemeke said she was uninspired by the typical influencer material. If she had to develop her online brand, she was going to do it in a way that was meaningful to her.

In which I explain why shutting down nuclear plants is bad 💎 pic.twitter.com/Oy2INi03vj

Her interest in nuclear energy started four years ago when a NASA scientist she follows tweeted about thorium reactors, technology that promises to one day produce more power and less radioactive waste than existing nuclear reactors. It piqued her curiosity. She loves reading about science, and has long been drawn to topics like space, metaphysics, and consciousness.

So she started reading up on nuclear energy and asking friends and acquaintances what they thought about it. And everyone she spoke to seemed to agree, at least privately, on two things: One, It’s actually safer than most people think, and two, We need it to tackle climate change.

Nuclear power plants don’t produce any greenhouse gas emissions, but the development of new plants has become stagnant in recent years. Several older plants in the United States are closing due to a confluence of factors, including regulations and economics, but also because they are politically unpopular. While there’s some momentum building around new, smaller reactors, nuclear energy remains a taboo subject for a lot of people. TV shows like Chernobyl and The Simpsons that focus on disasters and radioactive waste have further cemented its negative reputation.

The more Boemeke learned about nuclear, the more she was convinced that it was crucial to mitigate climate change, and that the stigma around it was based on misinformation. So last fall, when devastating fires were blazing in Australia and the Amazon, and Boemeke was considering how she wanted to use her platform, an idea came to her. “What if I become a nuclear influencer,” she thought, “and just create influencer content, but hack the algorithm to deliver something that I deem meaningful?”

It’s not that Boemeke has something against other forms of fossil fuel-free energy. It’s just that it seemed like nuclear was the only one that lacked public support — that was vilified, even. It needed a cheerleader, someone to set the record straight. “Nobody’s protesting solar panels,” she said. (Well, besides the NIMBYs.)

Nuclear energy can be pretty technical, so she knew the videos had to be eye-catching. Unlike the industry-funded #CookingWithGas influencer campaign, where Basic Bettys fawn over their gas-powered stoves, Boemeke’s videos are fantastical and deadpan — part performance art, part scientific explainer. They belong in the annals of bizarro-explainer TikTok alongside the great works of Planet Money TikTok guy.

Boemeke said she writes, produces, and edits all of the videos herself. She takes visual cues from the aesthetic of vaporwave, with outer space backdrops, floating objects, and glitchy graphics, and mashes them up with contemporary social media tropes. Isodope dons seafoam green contact lenses and bodysuits with loud, printed patterns. Face filters give her a heavenly glow or a glassy, digital veneer. She looks like an alien sent to explore earth, or a future human dispatched to show us the errors of our ways.

you have to stop being scared of nuclear energy pic.twitter.com/YyVEKraUq7

She says that she’s also inspired by Lil Miquela, an uncanny Instagram avatar. “It was just basically, how can I create a character that’s so eye-catching and so interesting to people that they can’t help but look at it?” Boemeke said. “I almost want people to doubt if I’m actually a person or not — I find it more interesting.”

Her next few videos will focus on the most common concern about nuclear power: What about the waste? Like any good science communicator, one of Boemeke’s biggest fears is that she’ll get something wrong. To make sure the information she’s putting out is bulletproof, she said she always “quadruple checks” her sources and facts before posting anything, and even sends her material out to scientists she has connected with for their feedback.

To anyone who suspects there’s some dark money behind her nuclear campaign, Boemeke says that she doesn’t have any vested interest in the technology, and intends to promote other ways to decarbonize the energy system, too.

“My goal is for our civilization to move beyond fossil fuels,” she said. “And if nuclear is this incredibly powerful tool that we have in our fight against climate change, I don’t see why we shouldn’t be using it, or at least having it be a part of the conversation.”