It’s late afternoon and the rush-hour commuter trains streak north and south through a battered stretch of Chicago’s South Side. Passengers gazing out the window do double takes as a swath of verdant green farm dotted with workers comes into view, rising among the scarred vacant lots and boarded-up houses.

Sprouting from the very center of the two acres of kale, beans, tomatoes, and fading sunflowers, are the wooden bones of an open-air barn. On its sliding door, a black star. And then it’s gone in a blur. The trains hurtle onward.

What they are seeing, says Emmanuel Pratt, is the future.

Pratt, 42, is the executive director and cofounder of the Sweet Water Foundation, which oversees this site, known as the Perry Avenue Commons. Pratt was named to the Grist 50 in 2018. Late last month, he was awarded a 2019 MacArthur “genius award,” which comes with a 5-year, $625,000 grant to support his work.

That work begins with growing and sharing food, but it goes far beyond that. Pratt says that, done right, urban farming can be a healing tool for cities. “We have all been displaced, disconnected from our humanity,” he says. “We must now build communities together.” 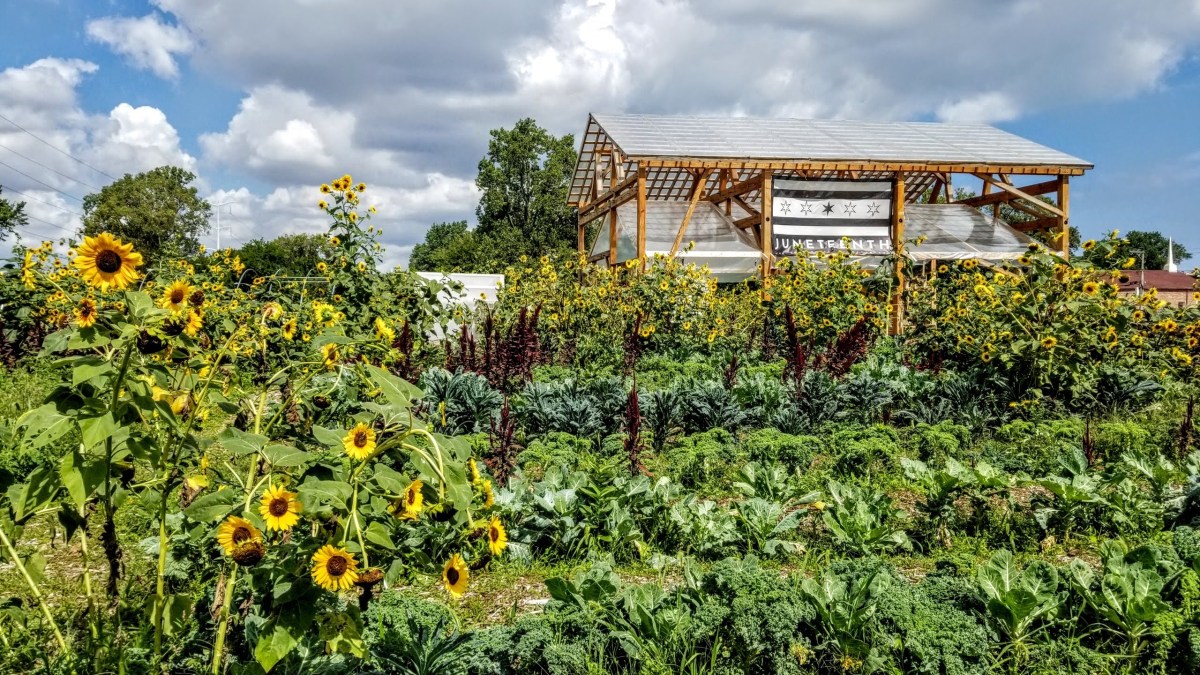 The Commons, which includes the Perry Avenue Community Farm, is located in Englewood, one of Chicago’s most impoverished and crime-riddled neighborhoods. Pratt founded the site in 2014. He had been running an educational aquaponics program when the city asked him if he would take over a failed urban farm project.

The task suited Pratt, an urban planner by training and an artist and visionary by nature. “I come from a neighborhood like this,” he says.

Pratt grew up in Virginia and was raised by a single mother who taught art, dance, and drama. It was important to her, Pratt says, that he have “exposure and self reliance while still [being] anchored in community support, love, and caring and understanding of humanity.”

They moved frequently in search of safer neighborhoods and better schools. When his mother remarried while he was in college, Pratt says his stepfather supported his goals as well.

He earned an architecture degree from Cornell and a master’s in architecture and urban design from Columbia. After graduation, he made his way to Chicago, where he had friends and family. Unable to ignore the city’s ills of racism, poverty, and crime, he decided to stay — there was work to do. Today, he lives with his wife and child not far from the Perry Avenue site.

But before literally planting seeds, Pratt says that it was important to know what Englewood had once been. That history, he says, “would guide me to see and feel what it should be.” 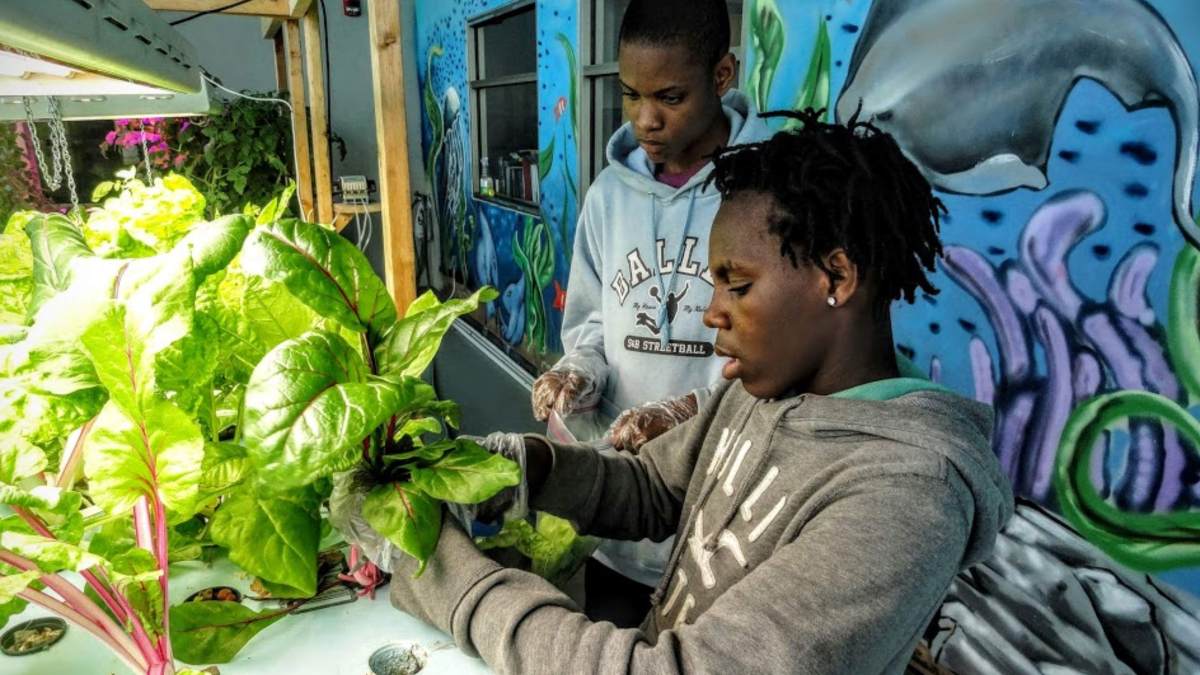 African Americans, mostly from Alabama, Mississippi, and Arkansas, began settling in Englewood during the Great Migration beginning in 1916, finding work in the city’s burgeoning industry. But by the 1950s, redlining and blockbusting had compounded Chicago’s ingrained segregation, forcing the South Side into disinvestment and severe poverty.

When Pratt arrived in Englewood, the population still mostly consisted of settlers from the Great Migration and their descendants — but there was no guarantee that this would last. Englewood lies in an Opportunity Zone, a federal designation meant to attract capital to disinvested communities. In practice, Opportunity Zone development has often left locals behind. Pratt says Englewood was facing the possibility of “something far more severe than gentrification.”

In Pratt’s thinking, the neighborhood had to be regrown in harmony with the residents, much the same as plants are chosen and nurtured in a garden. He had to cultivate a human community, and a local economy that not only fed people but also created jobs and housing. First, however, he had to grow trust and offer a safe place.

His plan, using a method he called “regenerative neighborhood development,” would blend urban agriculture, education, and art as a way to bring together residents from different generations, create spaces that met the community’s needs, and transform abandoned buildings and land into sustainable community assets.

A key element to Pratt’s design philosophy is careful “disruption.” He studies an area to see what it was, then carefully removes the negative aspects. He prefers to do this organically, leaving space to see what will develop.

You can see this same thinking in the language Pratt uses to describe his work. He wears a black Sweet Water T-shirt, made by a student, that reads “Blight,” with a slash running through the B, creating “Light.” Sweet Water’s tagline: There Grows The Neighborhood. 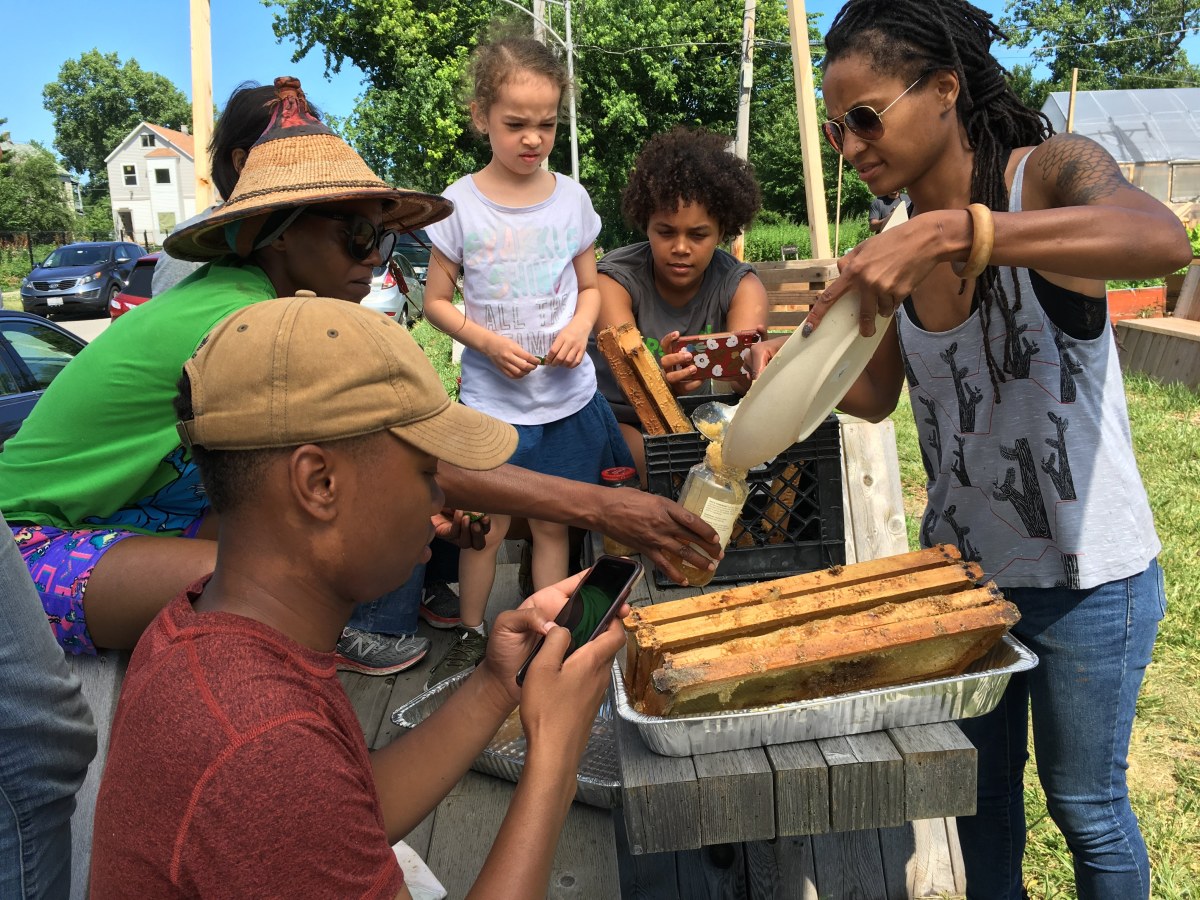 Five years after its founding, The Commons sees a constant flow of workers, volunteers, students, and visitors from far and near. The curious commuters who have seen Sweet Water from the train frequently come, too, in search of the farm with the skeleton of a building growing from its center. “What happens here?” they ask Pratt, most never having been in Englewood.

The answer to that question is a long one.

There are classes in carpentry, art, and cooking, all offered free to residents. There are 24 “you pick” beds of seasonal vegetables and herbs and a weekly farmers market. A carpentry training program has blossomed into a business where young people create tables, bookcases, benches, chairs, and tree swings that are sold in pop-ups throughout the city.

Some items are custom made in the Work-Shop, a greenhouse turned into a community woodshop. Some are crafted from wood reclaimed from donated crating that was once used to ship glass. This is how it grows: “Students invite their families to see what they made, the audience become clients, and the landscape changes,” Pratt says.

That’s just the beginning. A foreclosed home has become the Think-Do House, a cozy hub for community meetings, workshops, and retreats. A large Sweet Water-made table takes up what would have been the living room and dining room, the walls are covered in photos of residents and staff, and blackboards offer space to brainstorm think-do ideas. Wafting from the kitchen, where Mama Betty leads free cooking classes for neighbors, is the smell of fresh tomato soup and herbs.

The Smart Pod, a repurposed shipping container, is a learn and grow space used for education and inspiration, with a hydroponic greenhouse attached. The R-N-D Park, spanning five vacant parcels, is a safe space to hold gatherings and memorials, or just a place to sit on a repurposed tree stump and ponder.

And there’s the (Re)Construction House, named after an essay by Dr. Martin Luther King in which he says that there must be a radical reconstruction of society in order to repair racial injustice. An abandoned home that has been completely gutted and rehabbed, it recently reopened as is a live-in work space for apprentices and international networks of artists and designers.

“The idea is to create spaces where people can show up,” Pratt says, “where we can be human in the city.” 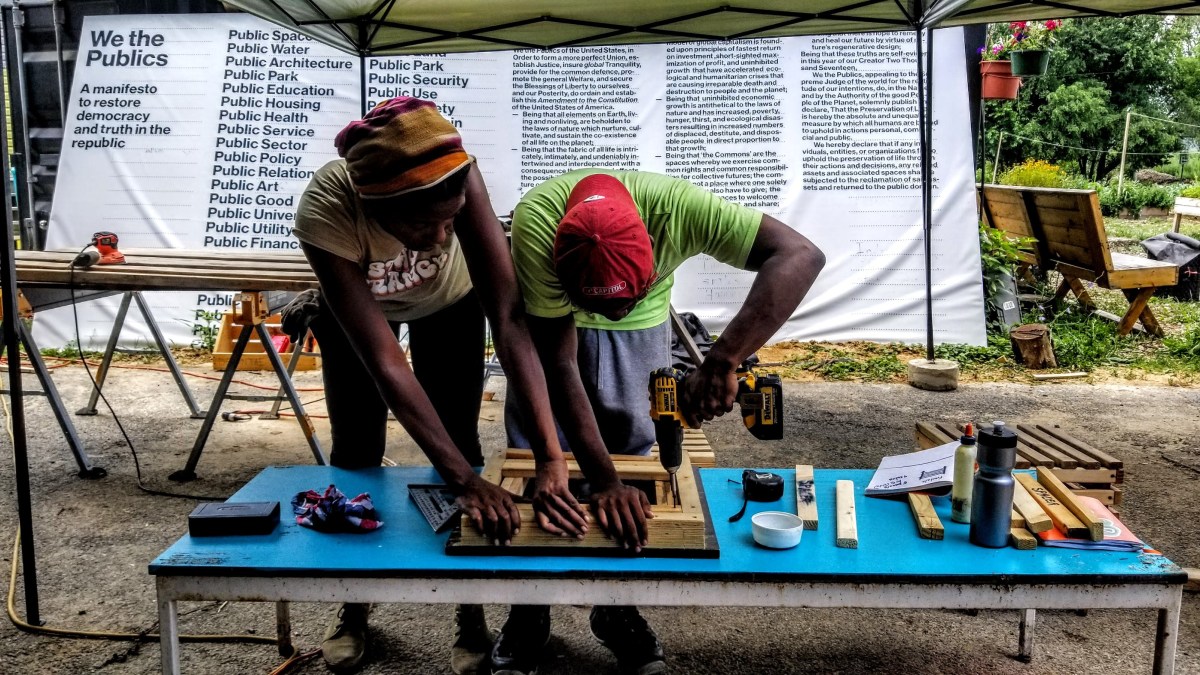 The Commons intersects across four contiguous city blocks. Residents and visitors have told Pratt that the ground within feels sacred. Others say that the place, alive this day with the clatter of crickets against an underlying hum of the nearby 14-laned Dan Ryan Expressway, makes them feel as though they are back in the South. The contrasts can be brutally beautiful.

A perfume of soil and growth and fresh-cut wood swells from the land. In season, it’s thick with sunflowers and alive with butterflies and praying mantises. “Feed them and they will come,” Pratt says. A young man crossing through the farm on his way home says that he knows he’s safe once he sets foot inside. Less than 24 hours earlier, a youth had been shot and killed just south of here.

It’s almost nightfall when Pratt ends an informal tour at the foot of the bony structure rising in the farm, a radical reconstruction of an 1850 timber frame barn fashioned from Douglas fir. Its name is the Thought Barn. It is historic, Pratt says: It’s the first timber frame barn to be built in the city since the Great Chicago Fire of 1871. Its support beams rest on the foundation of a former elementary school that in 1936, during the Great Migration, became a “social adjustment school,” and later in its life, a homeless shelter.

The barn serves as an entertainment and gathering spot, alive with jazz concerts, dance performances, farm-to-table dinners, yoga. The Harvest Dinner in September drew more than 300 people to the barn. The second annual Juneteenth festivities brought in hundreds more to celebrate the abolition of slavery and the “freedom tied to our farm,” Pratt says.

It was at that second celebration that Sweet Water unveiled the large, black star that hangs on the barn’s doors. Pratt calls it The Fifth Star, an addition to the four-star Chicago flag. It represents the city’s many untold histories and truths, he says. It recognizes Jean Baptiste Point du Sable, a man of African descent, as the original founder of Chicago, and the recent election, for the first time, of two African-American women as Chicago’s mayor and 20th Ward alderman.

Dusk sets over the farm and the Commons. Pratt pulls closed the barn doors, revealing the large black star. As he walks away, a train filled with commuters speeds by. He turns to take a last look at the barn, the Fifth Star shining in the near night.