Aaron Mair’s story starts out all too familiar to people of color who have encountered any of the big green groups: He asked one for help dealing with an issue of critical importance to the health of his family and community — and was turned away.

This was back in the 1990s, when — as has been well-documented — large environmental organizations were mostly run by well-off white people concerned about conserving critters and our country’s natural beauty, not the health and welfare of its people.

After his initial setback, Mair became one of the leaders in an effort to change that paradigm. (Spoiler: It’s been a slow process.) His story started with a choice between raising his daughters in the suburbs of Albany, New York, or in the city, and his decision to go with the latter — while building his house next to an urban nature preserve. He thought he had gotten the best of both worlds.

But then he started to notice the soot. Black flakes coated his car, the house, “everything,” he remembers. The air was acrid. Paint peeled from outside surfaces, like street signs and his deck door. Five or more years of chronic exposure caused both his daughters to develop asthma symptoms.

His dream home was in the prevailing wind pattern of a state-run garbage incinerator.

Mair worked in social services for the state government. “I had to sue my boss, so you can imagine how I was received by my coworkers,” he recalls. “When your children are injured, you have no choice.”

A coworker, Roger Gray, thought the Sierra Club could help. Gray was president of the local outpost of the green group, but directed Mair to the deeper pockets of the Atlantic Chapter based in New York City. The two drove to a meeting in New York, where Mair — a 6-foot-7-inch-tall black man — presented his case.

“One of the questions was, ‘Did you check with the NAACP?’” Mair remembers. “Right then and there, it was clear that the perception of race mattered. We were voted down.”

Gray was appalled. So he took up a collection among his local chapter and, several weeks later, presented Mair with a check to the “Arbor Hill Environmental Justice Fund.” Mair went on to win his battle with the state, shutting down the incinerator.

Then he decided to become a double agent, joining the Sierra Club in 1999, assuming leadership roles and, in 2015, being elected its first black president. All the while, he remained active in environmental justice causes. His friends in the grassroots would often ask why he bothered with what they considered an out-of-touch mainstream environmental group.

“That’s where the internalized racism and oppression is, and if I can help shift that Mount Everest and change its direction,” Mair would say, “it becomes harder for other environmental organizations to maintain their way.” 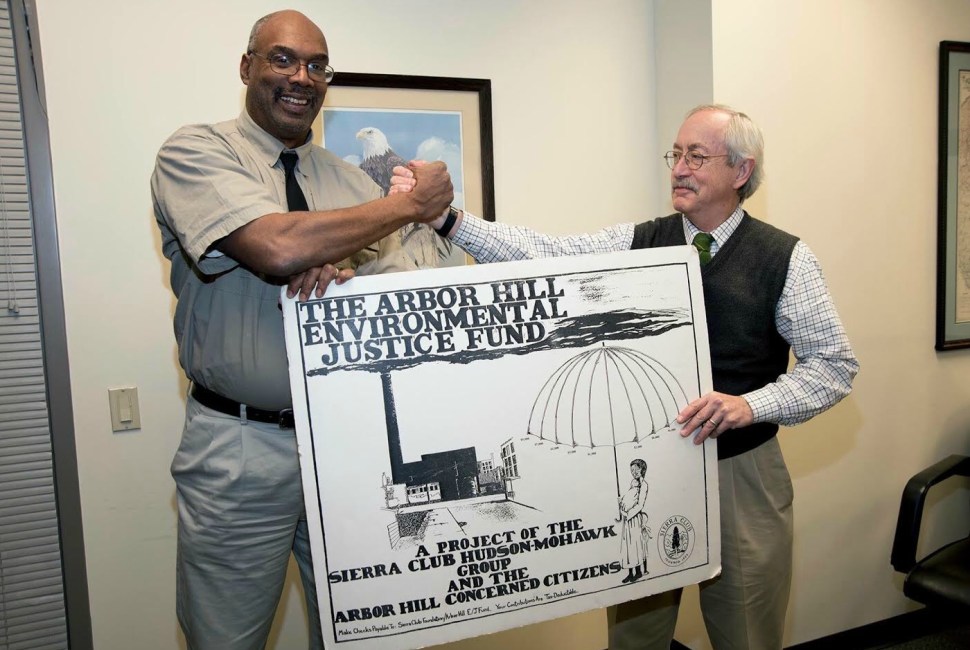 Aaron Mair (left) and his former colleague Roger Gray, who introduced him to the Sierra Club. Courtesy of Aaron Mair

According to the latest research from the advocacy group Green 2.0, however, Mount Everest hasn’t moved much. (The recent report follows up on a significant study done by Green 2.0 in 2014, which put firm numbers behind an already obvious problem.) Simply put, NGOs and foundations in the green space are still overwhelmingly white at all levels, especially top leadership — and that’s limiting their effectiveness, especially in addressing issues that affect frontline communities.

Most large environmental organizations started in conservation, which left them largely tone deaf to the concerns of communities that live in the shadow of chemical and power plants, don’t have access to clean drinking water, and live compromised lives due to the impacts and aftereffects of industrialization.

Green groups traditionally saw those plights as issues for social justice warriors. They also labored under a misconception that communities of color don’t care about the environment. But according to Vien Truong, director of Green for All, a 2015 survey done by her organization suggests exactly the opposite.

“Communities of color overwhelmingly care about the environment — more than their white counterparts,” Truong says. “They’re willing to pay more for the cost of the energy. They know that they will save costs later on in health care and in improved quality of life.”

At a time when the nation’s leadership seeks to gut and abandon all forms of environmental protection, there are very real drawbacks to the fact that mainstream environmentalists and grassroots community activists still operate largely in separate worlds, rather than creating a united front.

“We aren’t keeping up with climate change because the environmental movement is allowing a legacy of implicit bias to constrict its leadership and strategy,” wrote Green 2.0 Executive Director Whitney Tome in a recent piece for Fusion. “It silences the very people who often feel the greatest impact of a warming planet, even though activists of color could make or break success for this work.”

The new Green 2.0 report, titled “Beyond Diversity,” indicates that environmental groups seem to grok the need for inclusive staffs, but many have failed to transform.

Derived from interviews and surveys of close to 100 high-ranking officials at NGOs and foundations, the study shows that more than 70 percent of respondents said increasing diversity would widen their reach, allow them to address green issues on multiple fronts, and bring a greater focus on environmental justice.

Still, nearly three-quarters of staffers are white. And the numbers indicate less inclusiveness as you move to higher rungs in those outfits: Only 15 percent of the leaders are people of color. That’s a slight uptick since the 2014 Green 2.0 report, but given that the U.S. population is more than 36 percent people of color, the sector continues to lag.

(Although not included among the groups researched for the report, many nonprofit environmental media outlets, including Grist, face similar issues. New CEO Brady Piñero Walkinshaw says increasing diversity is vital to Grist’s journalistic mission. “We’re taking steps to embrace diversity as part and parcel to our work — from our hiring practices to the stories, communities, and sources we cover as a news organization.”)

One issue that sociologist Maya Beasley, a diversity consultant and the new report’s author, says kept popping up in her interviews was concern that a more diverse staff would lead to cultural misunderstandings in the workplace. She has no patience for that excuse.

“Your cultural discomfort or concerns about misunderstandings isn’t a reason to not hire people of color,” Beasley says. “It’s something for you to suck up or maybe get more therapy about.”

Instead, green groups should worry about cultural misunderstandings when they’re working in the field, says Margaret Gordon, cofounder of the West Oakland Environmental Indicators Project. “My reality is that there’s always been this problem,” she says.

Green groups regularly parachute into her community, Gordon says — West Oakland abuts a busy port and is rife with respiratory illnesses thanks to fumes from shipping, trucks servicing the area, and highway traffic — but the partnerships aren’t always fruitful. The outside organizations seem to have different goals.

Miscommunications often arise because green groups and their associates want to come in, collect data, and move on, she said, while her community members are looking for meaningful change. She points to a recent project where an environmental group, a major tech firm, and a research university mapped her neighborhood’s air pollution block by block. The scientists got the data they wanted and released a highly publicized paper earlier this month. But the people of West Oakland didn’t get what Gordon calls “liberation” from the pollution problems.

“After the community went through all the trials and tribulations with you, you should be supporting me to make local changes,” she says. “You can’t keep doing documentation without actualization.”

For organizations that truly want a more inclusive workforce, creating a diversity plan is one of the strongest first steps, says Beasley, who cofounded a diversity consulting firm called The T10 Group. Such efforts require an audit, clearly defined benefits, goal setting, and mechanisms to monitor progress.

In researching the new Green 2.0 report, Beasley discovered that fewer than 40 percent of green groups had a diversity plan in place.

“To make a good one, it requires really taking time and taking stock,” Beasley says. “And it tells possible job candidates that you’re serious about diversity.”

Hiring can be tricky, because organizations in all sectors rely heavily on referrals and recruiting through established networks. In the environmental sector, those networks are largely white.

That’s been an issue for River Network, a small NGO advocacy group with 17 full-time employees that’s slightly ahead of its peers — people of color make up one-third of its senior staff.

The organization has been taking concrete steps toward being more inclusive for years, and its leaders believe that doing so is imperative for it to remain relevant as people of color become the majority in the United States. 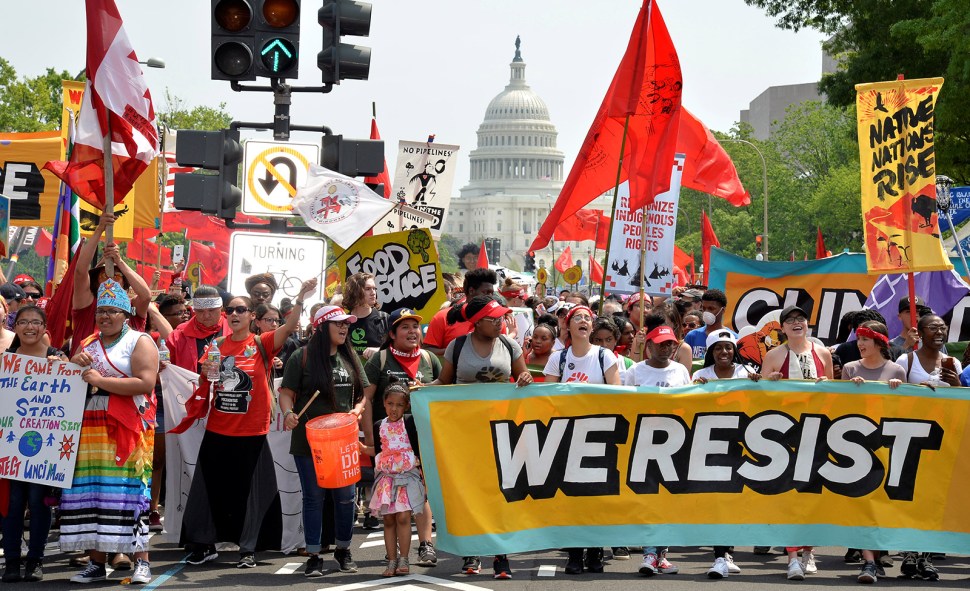 The People’s Climate March this spring demonstrated how interest in climate and environmental issues cuts across a wide swath of demographics. Reuters / Mike Theiler

“Our ultimate goal at some point of time is to look like the society we’re a part of — to have that diversity of culture and, frankly, skin color on staff,” says River Network President Nicole Silk. “It is an aspiration.”

To show its commitment, River Network has revamped its employee handbook and gone beyond traditional recruiting tactics to ensure talented folks aren’t being excluded. It also hires staff members who aren’t afraid to discuss aspects of race and work with people who look different from them.

Among the big greens, Earthjustice is often considered a leader in addressing diversity. Over the past six years, its staff went from 20 percent people of color to nearly 40 percent. Chas Lopez is determined to keep that percentage climbing; he joined the organization in September 2015 as its first vice president of diversity and inclusion.

Speaking one-on-one with his colleagues during a listening tour of Earthjustice outposts across the country, several themes emerged, Lopez says. Some of those went into the development of a three-pronged rubric for identifying future Earthjustice hires: All of them would need to have functional skill, emotional intelligence, and cultural competency.

Those attributes allow candidates to sidestep the whole cultural misunderstanding bugaboo, Lopez says, both inside the Earthjustice office, and — just as importantly — in the outside world when the organization’s lawyers are representing clients, a large percentage of whom come from environmental justice communities.

“When we’re representing people,” Lopez explains, “we need to make sure we’re mindful and respectful and acknowledge that history of a lack of trust — based on the way that these organizations or communities feel like they’d been treated in the past.”

For Aaron Mair, who has led one of those distrustful communities and also served as president of the biggest environmental organization in the country, he hopes his tenure as Sierra Club president showed green groups that they could serve their traditional missions while broadening their mandates to address the needs of vulnerable communities.

“White privilege and racism within the broader environmental movement is existent and pervasive,” Mair says. “The current is not maintainable — we’re becoming a brown nation.

“It’s not about a one-off,” he adds. “It’s about sustainability.”

Great Plains wildfires used to be rare. Not anymore.