Tucked in a grassy ridge cutting across the Small Family CSA Farm in La Farge, Wis., is a refrigerator so efficient it requires not a single watt of electricity, yet it can keep some crops chilly for months. It’s not some high-tech, Swedish-designed, solar-powered cooling unit. Just a good old-fashioned root cellar, kept cool through the summer months, and above freezing in the winter, by the soil surrounding it.

Shunning hulking and energy wasting refrigerated cold storage, Jillian and Adam Varney four years ago chose to build this two-room cellar for $10,000. Over time, like solar panels, it will pay for itself in savings – and in revenue for their small, organic farm. The hand-built produce closet, which includes a room kept extra cool with a small air-conditioner, allows them to extend their 220-member community-supported agriculture operation (CSA) into the winter months.

Root cellars are basically any storage area that operates on the earth’s natural cooling, humidifying, and insulating properties. To work properly, a root cellar must stay between 32 and 40 degrees Fahrenheit and at 85 to 95 percent humidity. The cool temps slow the release of ethylene gas, halting decomposition. High humidity levels prevent evaporation loss, stopping your veggies from shriveling and withering.

Outmoded with the birth of the refrigerator and the 1950s kitchen, root cellars all but went underground, resurfacing briefly in the ’60s and with survivalists. Now, this tiny house movement for foodstuffs is experiencing a slow but certain renaissance as the local food movement gains momentum. Jillian Varney explains why people are diggin’ them again:

“Come November, both rooms are packed full with beets, daikon radish, napa cabbage, parsnips, celeriac root, potatoes, onions, shallots and bins of apples,” she says. “We had 3,000 pounds of carrots that we were able to sell into this March. We can over-winter shallots, putting them in the first CSA boxes of the season. And we can keep our potato seed in the cellar, ready for planting the next year.”

The Varneys’ bible is Root Cellaring: Natural Cold Storage of Fruits & Vegetables. Meanwhile, articles on how to build a root cellar have flooded the internet.

These things aren’t just for farmers. Institutions of higher ed have added root cellars to house the bounty from campus and neighboring farms, often using stored food for student meals. And some colleges share the space with locals. The University of Montana in Missoula, Rachel Carson’s alma mater, Chatham University in Pittsburgh, Poultney, Vermont’s Green Mountain College, and others all incorporate community root cellars into their sustainability programs.

EcoVillage Ithaca residents, in cooperation with students from Ithaca College, built an earthbag and rammed earth tire cellar for $6,000 in 2006. The community uses it to store 2,000 pounds of veggies for use during the winter months via a village CSA.

Community root cellars are handy because not everyone has the yard space to put one in. They also help draw people together, as they cooperate to grow and preserve local foods. 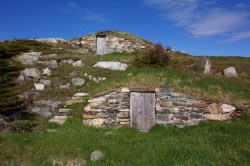 Old cellars are back in use in Elliston, Newfoundland, a.k.a. the Root Cellar Capital of the World.

They’re really taking off north of the border. In Halifax, Nova Scotia, the Ecology Action Center offered funding for three community root cellar programs to local nonprofits, building one in the basement of its own building. Meanwhile, in the fishing village of Elliston, Newfoundland, known as the Root Cellar Capital of the World as it’s home to more than 130 veggie caves, a new generation is taking up farming and making use of cellars built into hillsides by early settlers.

Even community gardens and urban farms – some fueled by immigrant populations that have long utilized alternative food storage — are creating cellars. Some are simply buried galvanized trash cans or barrels, sunken deep freezers, or shipping containers. In Detroit, growers are utilizing basements in abandoned buildings.

But it’s farms providing food to local consumers where root cellars are making perhaps their biggest economic impact. Because of the cellar, seasons can be extended, revived, or momentarily recalled, as a farmer retrieves extended back stock not only for families but for chefs and anyone else fueling a locavore movement. The farmer’s root cellar becomes a bit of a prized secret garden, harboring squash, herbs, purple potatoes, or heirloom apples.

At the Hazzard Free Farm in Pecatonica, Ill., farmer Andy Hazzard says last year, she converted an old 10-foot-deep cistern with a concrete cap into a root cellar where she stored 800 pounds of organic carrots over last winter. Covered with 15 bales of straw and fitted with a light for some warmth, the cellar allowed Hazzard, 39, to supply customers with fresh carrots throughout the winter.

What led her to create a root cellar? “During the winter In the Midwest, money dries up unless you have a CSA operation or a good line of credit,” Hazzard says. “So to keep it rolling, farmers are creating storage crops such as squash, beets, and turnips. We had lots of carrots and many accounts that wanted them past season. We could have rented a refrigerated semi-trailer for $5,000 or use what was available and worked just as well.”

Her first year cellar crop brought in $2,000. “But when done properly and grow to fill their space, it could mean tens of thousands for many farmers,” Hazzard adds.

Clare Hintz, 39, of Elsewhere Farm near Wisconsin’s Lake Superior, converted part of her basement into a root cellar where she also stores a personal stock of pickled eggs and homemade hard cider. And Mary Ann Bellazzini of Campo di Bella in Horeb, Wis., is building a root cellar beneath an existing wine cellar.

Root cellaring has long been a staple at the Sliwa Meadow Farm in Decorah, Iowa. In the 1980s, Perry-O and David Sliwa bought a patch of land, pursuing their desire to live off-grid, designing and building their simple home to include an underground root cellar. It houses not only vegetables but also Perry-O’s flower bulbs, garlic braids, and canning jars. This patch of Decorah has become an off-the-grid hub where others look to the Sliwa’s for guidance.

“We have a mission statement of sorts,” Perry-O says. “As a small village we spend time learning together sharing the gentle passing of time. And in that gentle passing, we look to show the next generation a model for intentional living and homemade happiness.”

In testament to how well the good earth can not only grow food but harbor it, Philip Ackerman-Leist, an environmental studies professor at Green Mountain College, recalls when a very old, local root cellar was found. “They were still pulling vegetables from years and years ago out of the root cellar, and they were perfectly good,” Ackerman says. “So it’s not just a pie-in-the-sky idea. It’s exciting to see their return.”