When I started reporting on California’s drought I heard a lot of people complaining that farmers were growing crops that would simply be prohibitively expensive if they had to buy and sell their water at a fair market price.

But then I learned that, actually, California already has a water market. Farmers can buy and sell water. In theory, this market should distribute water to where it’s needed most. That is, if there are people who can make more money growing food on their land than I can on mine, they’d buy my water.

And for the most part, it works. Farmers trade water all the time — especially from the east side of the San Joaquin Valley to the west. “The people who are doing those deals really do have a pretty good idea of what the market price of water is,” said Ellen Hanak, director of the Water Policy Center at the Public Policy Institute of California.

So it works? Yes: Farmers really do change their practices and make different choices about crops depending on the price of water. But it’s a lot more complicated than selling a car — so complicated that it scares some people off. Philip Bowles, a farmer from Los Banos, told me he worried that selling water could put water rights in jeopardy. It’s legal to sell water, but as historian Norris Hundley Jr. put it, state water law has always “lacked clarity and invited attorneys to use their imagination.”

It’s tricky to show that the water you’re selling is legally yours, and tricky to get it to your buyer. These problems stem from the physical properties of the stuff. The amount of water you need to irrigate a field is big and heavy; it’s slippery — to hold it we need special containers (like reservoirs); it’s always moving, and mixing, and splitting into pieces, so it’s hard to tell whose is whose; it unpredictably falls out of the sky, and has no respect for property lines; if you drop it, it disappears into the ground. Because water is liquid in the physical sense, it is not at all liquid in the financial sense.

California has the infrastructure to move water: giant dams, pumps, canals, tunnels that run under mountain ranges, and pipes that go over them. A farmer on the Trinity River, 200 miles north of San Francisco, can sell water to Los Angeles, and the system can actually make that delivery. But the journey is risky. 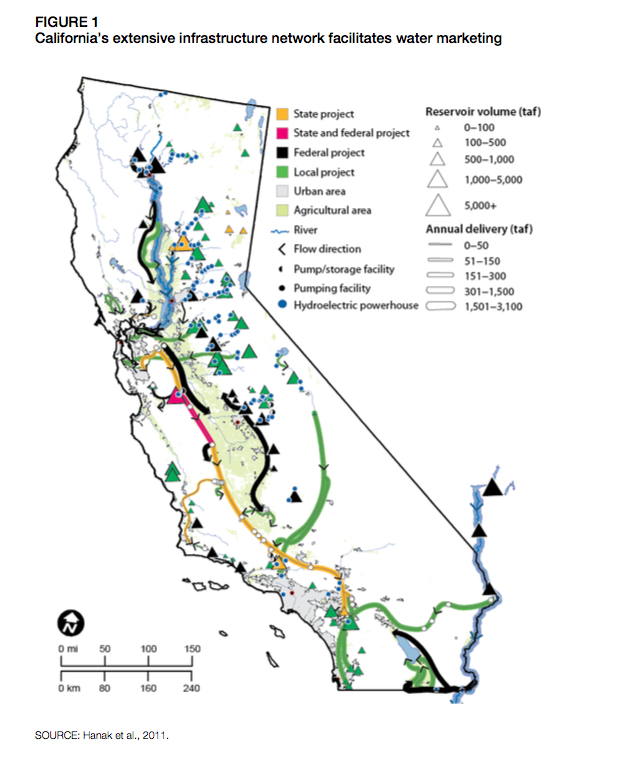 To try to understand the difficulties in trading water, I decided to set up a hypothetical exchange. I talked to Dale Melville, manager-engineer of the Dudley Ridge Water District in the southern San Joaquin Valley. Suppose I’m a farmer in your water district, I told Melville, and I want to sell my water. I’ve got some old almond trees that aren’t producing anymore, and, instead of planting more, I’d just like to sell 100,000 acre feet of irrigation water. What do we do first?

We’d start by asking if there was anyone in the district who wanted that water, he said. This is just good manners, and if you can sell the water locally you avoid a significant hassle. Then, he’d call up a few buyers from around the state. The market is small enough that you learn whom to call, he said.

One of those likely buyers is the Metropolitan Water District of Southern California — the Los Angeles water system, or Metro for short. Let’s say that we agree to a price with Metro and shake hands. Now do I get my check? Melville laughed. “It might take a little while,” he said.

Next we’d need to get approval from someone like Nancy Quan at California Department of Water Resources. “If you are going to use our facilities to transport the water, you have to show that the sale is going to have no negative impact to the economy, or the environment, and that it’s not going to injure other water users,” she told me. And I’d have to be pretty thorough.

Usually, the Department of Water Resources will have a scientist visit me to check out my situation and ask questions. It wants to ensure that I’m actually letting water flow past that I would have used if I weren’t making a sale. I’d have to show that nothing was growing on the land, not even weeds. The whole process might take a couple months, Melville said. (I’m actually making it seem simpler than it is by skipping some subtleties here. To understand the full regulatory process see the chart below, which comes from this white paper.) 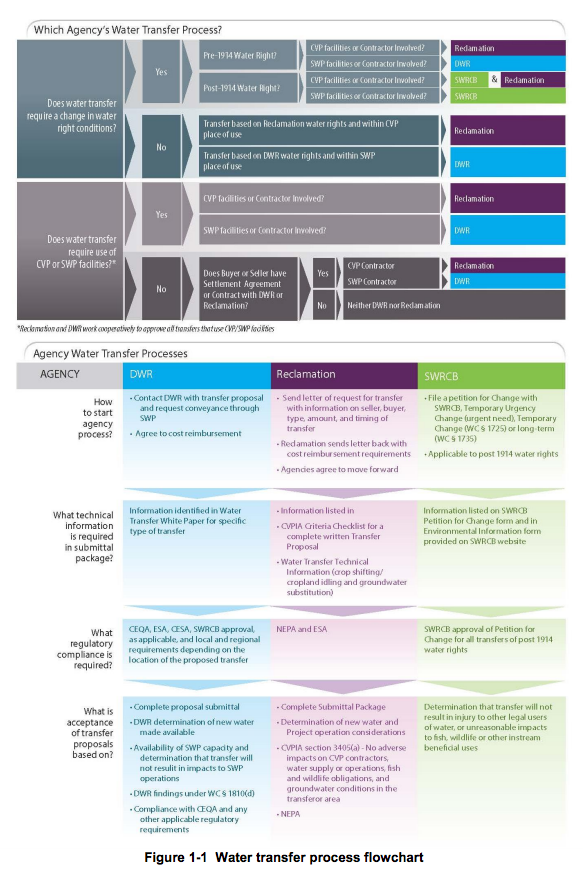 California DWR and U.S.Bureau of Reclamation

Then, I’d actually pretty much be done. I’d let the water flow past, instead of diverting it from the State Water Project canal onto my land. The state would deliver an equivalent amount of water to Metro. But, if I were a farmer in the Sacramento Valley, north of San Francisco, there would still be one big challenge: getting the water across the Sacramento-San Joaquin Delta.

The Delta is the bottleneck of California’s water system. Water from the north enters on one side of this web of waterways, and pumps suck out water on the south side. If they suck up too much, the pumps will reverse the flow of the Delta, drawing saltwater from the ocean side up the estuary. To avoid this, the pumps only run in July, August, and September, and so sometimes there’s not enough pumping capacity to make all the deliveries, and water gets trapped up north.

Usually the buyer assumes this risk, Melville said. “It’s a huge risk. You’ve got this water behind a dam somewhere, and you don’t know if you are physically going to be able to move that water across the Delta.” It can stay in the reservoir as long as water levels are low, but if there’s a threat of a flood, the dam operators have to let the water spill out into the ocean.

In 2003, for instance, Metro bought 145,000 acre feet of water from north of the Delta. Then the storms came in. “We had $13 million worth of [water] isolated above the Delta, and no ability to get it. Well, two-thirds of that water went out into the ocean. We did end up getting a third, seven years later.”

My experience in trying to sell hypothetical water left me with the sense that the risks and transaction costs would make it prohibitively unattractive. But people still manage to do it. It’s the water districts, not the individual farmers, that take care of the red tape.

But it could be much easier. In Australia, you can do the whole deal over the internet. I talked to Tom Rooney, founder of Waterfind, an online platform for buying and selling Australian water, and the process he described sounded simpler: “You post your order up, and of course if you want too much, you won’t find a buyer right away. But if you are at the market price, it will clear that same day, and the person will have the water the next day.”

In 2002, when Rooney developed his first version of the online marketplace, people thought he was crazy, because there was hardly any water market, and it was still the age of dial-up modems. “I’m lucky I didn’t get locked up in the loony bin,” he said. But Australia was also two years into a drought, which stretched on until 2010. And the water markets turned into a key tool for adapting to the drought.

As the country dried up, it was forced to make changes. Australia passed a law to clarify water rights and make them more easily tradable. It installed meters to measure how much each farmer was taking. It set strict fines for farmers who broke the rules.

There’s still plenty of complex water law and environmental regulations, but all that has been rationalized enough so that it can take place under the hood of an online marketplace like Waterfind. There are 27,000 government rules integrated into the system, Rooney said. As you move water from one place to another, if you have to leave a percentage for environmental uses or pay a special fee, Waterfind automatically makes those adjustments to the price.

Australia may seem light-years ahead of California. But as California enters its fourth year of drought, it’s edging toward the decade-long ordeal that forced Australia to rewrite its laws. If the state legislature were motivated to make the necessary changes to water law, Central Valley farmers could be trading water from their smartphones, Silicon Valley-style. And even if the state doesn’t go that far, it could improve its water market considerably with some simple tweaks. (Hanak suggests six fixes in this report.) Even in its current, cumbersome manifestation, the California water market is working — moving water to the farmers that need it most.

P.S. Whenever we talk about using markets to organize some vital resource that we need to survive, people get very nervous. If we allow the market to set the price of water, what happens to the poor?  Basically, the state has to take care of the people who can’t afford water, which is what we do now. In cities and towns, poor residents are offered subsidies, or “lifeline rates,” well below the market price of water. In small communities where the wells have gone dry, the state has been trucking in water and laying pipes, Hanak said. The Pacific Institute, PPIC, and basically every expert I could find, all support the use of markets to allocate water and cut waste — as long as we protect the poor and the environment.

Are the leftovers from home remodeling trash or treasure?