You’ve probably seen the statistic: According to the United Nations, we’ll need to produce 70 percent more food by 2050 to feed ourselves. That goal of increasing production by 70 percent, which is just as daunting as it sounds, is called the “food gap.”

Food movement types generally hate this statistic — it’s deceptive, they say, because we wouldn’t need to increase production at all if we simply eliminated food waste, shared food equally, and controlled our appetite for meat. That’s true in an abstract sense, but easier said than done. After all, pretty much every one of our resource problems, from food to energy to fast fashion, would disappear in a flash if we figured that out. But humanity doesn’t tend to behave so honorably. Most people who have diligently crunched the numbers say we are going to have to use every option on the table to feed our growing population, including increasing farm productivity, curbing food waste, and shifting toward more plant-based diets.

A new working paper from the World Resources Institute looks closely at that last proposition — shifting our diets — and tries to figure out how far such a shift can get us. But its authors estimate that a realistic shift away from meat could shrink the “food gap” from 70 percent to 50 percent. Hey, it’s something.

Here are a few takeaways:

1. The rich (that’s us) are eating more than our share.

The chart above, in all its stoplight-colored glory, shows us two important things: First, the emissions for “the average American diet were nearly double those associated with the average world diet” — we are pigs. Second “80 to 90 percent of the impacts [came] from consumption of animal-based foods.” Meat-eating is the clear culprit: Nearly half of our dietary emissions stemmed from beef alone.

2. It’s incumbent on the affluent to change. 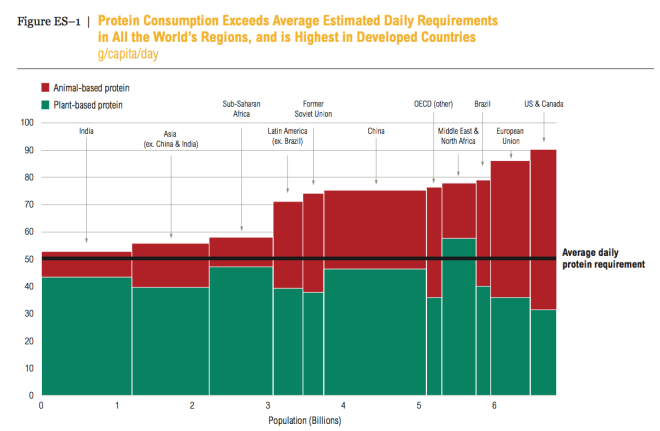 The paper doesn’t call for global veganism. The authors recognize that animal-based food is crucial for many of the world’s poor. As you can see in the graph above, people in India and Asia barely get enough protein even when you include milk, eggs, and meat. And that’s just the average in those regions: People below the average aren’t getting enough. It doesn’t make sense to ask undernourished people to give up any food that’s working for them.

Many of the poorest people around the world also depend on livestock — animals account for 40 percent of global farm income. It’s important to increase the productivity of animal agriculture, the authors write — in other words, to produce more meat with fewer animals and fewer resources — while shifting the diets of the rich to plant-based foods.

3. We’re probably not going to do this by raising awareness.

If a survey-taker asks them whether ethical food is important, most people say yes. But when they have to rate how important that is against other issues … it becomes relatively unimportant. Wallets always take the top spot, and preaching is pretty ineffective.

So what does work? 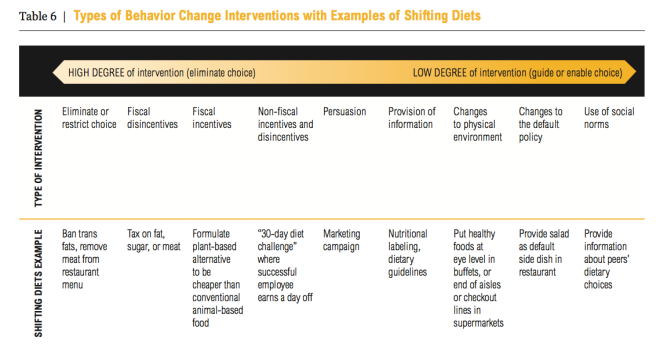 Basically, letting eaters decide what to eat is not going to be an effective way to meet this challenge. It falls to government, activists, and business to change things, the paper’s authors suggest. Especially businesses. Supermarkets, food processors, and restaurants can play a big role here, according to the report. Simple steps like giving tofu, seitan, and other meat replacements eye-level shelf space at the grocery store can make a difference. And change can happen quickly if a business finds a killer meat substitute — something cheaper and yummier, with less environmental impact. That’s the holy grail.

If we get this part of the puzzle right — shifting rich eaters away from meat while increasing the productivity of animal agriculture in developing nations — it could shrink the food gap by nearly a third. That would put us within striking distance of being able to feed ourselves in a sustainable way — with the added benefit of leaving more forests standing and more arteries unclogged.