Four hundred and fifty billion dollars. That’s the amount of money Chinese officials recently announced they would invest to improve the country’s farms over the next four years.

That isn’t just a big number — it’s a redonkulously humongous number. Compare it to the new $3 billion Chan Zuckerberg Initiative (that’s Zuckerberg of Facebook wealth and fame) that aims to treat or prevent all diseases by 2100. Or the record $4.6 billion that U.S. investors crowed about pouring into ag startups last year.

Take those massive efforts and multiply them 100-fold, and then we’re in the same range as this proposed Chinese investment.

The Agricultural Development Bank of China has created a fund to loan out at least that much money by 2020, according to state media. Experts that I talked to are skeptical — China has announced it would spend big money before and followed through with just a fraction — but even a fraction of $450 billion could be transformative.

China’s choices, not to put too fine a point on it, will determine the fate of the world. If China were to follow the same path as the United States and Europe, by using inefficient fossil fuels to lift its 1.3 billion people to a comfortable standard of living, it could be pumping 30 gigatons of greenhouse gases into the atmosphere by 2030 — that’s three times as much as the whole world emits now. As the country feeding the largest population in the world, China’s policies on fertilizer use, genetically modified seed research, and agricultural regulations will matter to us all.

So where will all that money go, and what impact could it have on sustainability? I asked some experts on China ag policy for their theories. 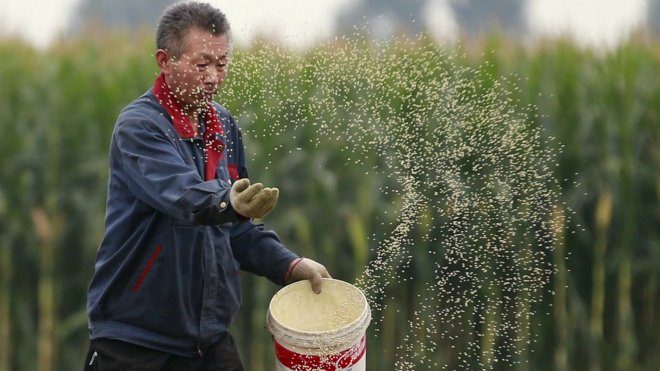 Geopolitical strategists have long understood that the stability of a nation depends on its ability to keep its citizens fed: Military might depends on agricultural might, hence the old saying, “an army marches on its stomach.” Historically, China has tried grow enough grain to feed itself, but it has scaled back its self-sufficiency goals and, in the last decade, the country has allowed food imports to surge in. But it’s been trying to mount a counteroffensive on a different front, buying farmland and agribusinesses in other countries (like the pork company Smithfield from the United States).

Some of these newly announced loans could finance further expansion abroad. But recent signals from Chinese officials suggest they are focused less on controlling land these days, and more on controlling seeds.

Last year, the Chinese government announced its intentions to become a leader in the genetically engineered crop market. “We cannot lag behind others in the GMO research. Our GMO market should not be saturated by foreign brands,” said agriculture official Han Jun.

China sees control of its food as a matter of national security, said Scott Rozelle, who studies Chinese agricultural policy at Stanford. And it’s hard to control your food if you rely on foreign countries for your seed.

The world got a major hint that China has been trying to catch up with American seed companies in 2012, when the FBI caught three men trying to smuggle corn kernels from Iowa fields into China. As journalist Ted Genoways wrote in his telling of the story: “The Department of Justice maintains that China is quietly permitting and even encouraging companies to steal American agricultural secrets right out of the ground.”

Then this year, the China National Chemical Corporation sought to gain a foothold in the seed industry by paying $43 billion to purchase the Swiss seed company Syngenta. That acquisition might be part of the $450 billion pot, said Elizabeth Economy, a China expert at the Council on Foreign Relations.

China says it can produce more food and reduce the environmental pressure of farming by breeding better seeds. One of the chief complaints of the anti-GMO movement is that the food system is increasingly controlled by a few profit-driven companies. It’ll be interesting to see what a communist GM seed company — that is, a company primarily beholden to government interests rather than shareholder profits — engineers. 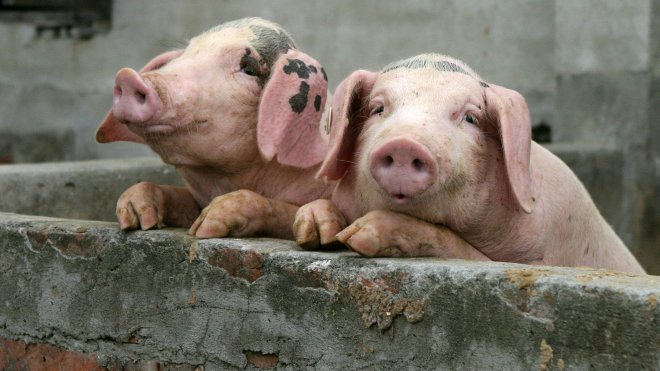 There may not be many more huge dams or long irrigation canals to be built in China, Rozelle said, but there are several ways in which the country could bring its farming practices up to date.

“They recognize that their agriculture is enormously inefficient, and they want to fix that,” Economy said.

The primary inefficiency is the amount of fertilizer that Chinese farmers use — more than twice as much as their U.S. counterparts. That fertilizer washes off the fields and pollutes waterways. It turns into nitrous oxide gas and warms the earth.

Most significantly, it takes lots energy to make nitrogen fertilizer. Improving fertilizer efficiency could reduce China’s total carbon emissions by as much as 6 percent, according to one study. That’s much as all the emissions from Switzerland. Six percent matters when, as Ben Adler points out, we get excited by a 1-2 percent decline in emissions.

China is moving quickly from a system of growing a few head of livestock at a time in backyards to concentrated animal feeding operations. CAFOs may be big and stinky, but when you are raising twice as many pigs as there are Americans, you need to capture their poop and keep it from running into the rivers. We’ve seen disgusting examples of CAFO manure lagoons rupturing into rivers here in the United States, but those catastrophes are nothing compared to the pollution catastrophe that you’d have if there were no attempt to control the feces.

If you look at the amount of fertilizers and pesticides to feed each person, U.S. farms were dirtiest in the mid 1970s, and they’ve been improving since then. By spending this money, China potentially could jump past our dirtiest phase. 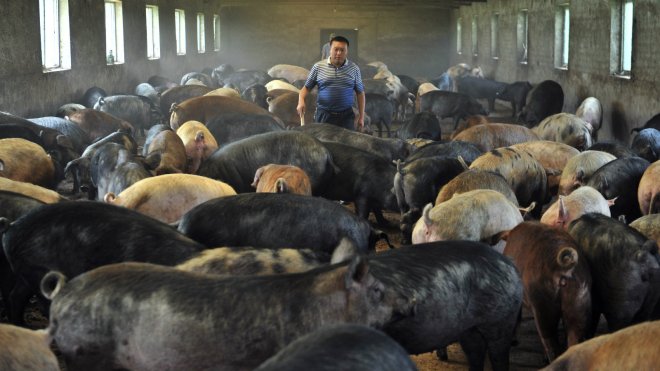 This announcement also could be a nod to people living in the countryside. “President Xi Jinping has long been accused of completely neglecting rural China,” Rozelle said. The government may be seeking to show that it has money for rural areas by announcing this massive agricultural loan package.

That might not be the best approach if China really wants to increase rural incomes and clean up the environment, according to Economy. “China will often look to technology as a cure-all,” she said.

Farmer incomes will go up a little with increased productivity, but economists have shown decisively that the thing that drives up farmer income is increasing the size of farms. And right now, farms in China are broken up into tiny, collectively owned plots averaging 1.5 acres — in the United States, most farms are over 1,000 acres. If people had land rights, some farmers would buy plots to expand their fields, while others would sell the land and get out of the business. “China has promised to develop land-tenure laws, and it hasn’t done that,” Economy said.

The country might also be doing more to clean up its soils. Some 16 percent of China’s sparse farmland is contaminated with heavy metals and other pollutants. If China really wanted to improve its agriculture, and the livelihoods of the rural poor, it could pass reforms to stop this sort of contamination, Economy said.

If this is all just a gesture meant to mollify a political faction, it won’t change much of anything. But, if China actually figures out a way to deploy some of this money in a way that upgrades its farms, it will almost certainly be good for the environment.