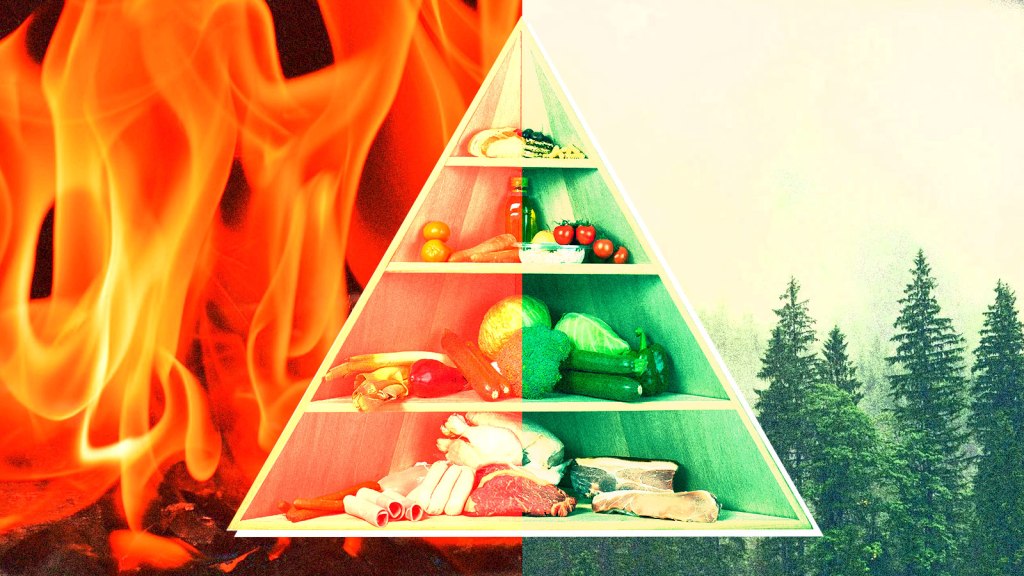 Currently, we’re missing that opportunity. According to a new analysis published last week in the medical research journal the BMJ (formerly the British Medical Journal), most governments’ dietary recommendations are neither sufficiently healthy nor sustainable. For the study, researchers from Oxford, Harvard, Tufts, and Adelaide Universities collated data from all available dietary guidelines, covering 85 of the world’s countries. They looked for specific language on what people should eat — phrases like “eat at least five fruits and vegetables a day” — and then used climate and epidemiological models to predict what would happen if the whole world ate that way.

What they found was that 95 percent of the world’s dietary guidelines are incompatible with at least one of the goals set by international climate and public health agreements like the Paris Agreement and the United Nations’ Sustainable Development Goals. For example, only 56 of the 85 countries’ guidelines (66 percent) were on track to meet the UN’s goal of reducing deaths from noncommunicable diseases like cardiovascular disease and cancer by one-third by 2030, relative to 2010 numbers.

The global failure to provide rigorous dietary recommendations just from a sheer nutrition standpoint is “woefully shocking,” said Marco Springmann, a senior researcher in population health at Oxford University and the lead author of the study.

Also disappointing — but perhaps less shocking — were the dietary guidelines’ environmental deficiencies. After considering country- and crop-specific impacts for greenhouse gas emissions, land use, water use, and fertilizer application, they found that 87 percent of the countries’ dietary guidelines weren’t compatible with emissions pathways to limit global warming to below 2 degrees C (3.6 degrees F). Between 67 and 89 percent failed to meet other international environmental goals like limiting the use of fresh water or nitrogen fertilizer. Only two countries — Indonesia and Sierra Leone — gave recommendations that lined up with all of the environmental targets considered by Springmann’s team.

At the center of most of these failures were the food sector’s two biggest emitters: meat and dairy. Springmann said national governments have tended to shy away from specific recommendations about whether or how much of these products to eat, despite clear links to health and environmental issues. For example, red meat has been uncontroversially implicated in cardiovascular disease and cancer, and animal products are responsible for up to 78 percent of all food-related emissions. “Without reducing the meat and dairy proportion of our diets, there is no way to make the Paris target,” Springmann explained.

The problem, said Sheila Fleischhacker, a law professor at Georgetown University and a former nutrition advisor at the USDA, is that most national dietary guidelines are designed to consider nutrition alone, without factoring in the social and environmental consequences of what we eat. But you can’t have a conversation about the food world without talking about sustainability. “What you eat impacts you and the planet,” she said.

A diet designed to address both environmental sustainability and public health might look a lot like a “planetary health diet” put together last year by the EAT-Lancet Commission on Food, Planet, and Health — a provocative proposal to provide everyone on earth with adequate nutrition while not exceeding “planetary boundaries.” Citing climate concerns, its recommendations include a 50 percent reduction in global red meat consumption by 2050. Springmann and his team found that if this diet were uniformly adopted around the world, it could reduce premature mortality by one-third compared to if everyone obeyed countries’ current national guidelines. Plus, it would provide more than three times greater reductions in greenhouse gas emissions, along with other environmental benefits —enough to meet all the international health and sustainability targets considered in the study.

Springmann’s analysis comes at an important time for the development of U.S. nutritional recommendations — the U.S. Department of Agriculture (USDA) and Department of Health and Human Services (HHS) are currently drafting the eighth version of their Dietary Guidelines for Americans (DGAs), a comprehensive nutritional guidebook that is released every five years.

In fact, Springmann’s analysis was published on the same day that an independent advisory committee released a slate of scientific recommendations for the DGAs, which will inform the USDA and HHS as they prepare the 2020 dietary guidelines for publication later this year. But it’s a foregone conclusion that sustainability will not be included — in 2015 the USDA said it didn’t believe that its dietary guidelines were “the appropriate vehicle for this important policy conversation about sustainability,” and this year, they told the advisory committee not to bother investigating environmental issues. As a result, the words “climate change” do not appear anywhere in the committee’s 835-page report. (However, on page 771 it does recommend that sustainability should be considered by the next committee — in five years.)

One reason it may be difficult for governments to make strong environmental recommendations — which would almost certainly include stringent limits on the consumption of animal products — is the political influence of the meat and dairy industries. In the United States, “the current system opens the guidelines up to lobbying and manipulation of data,” Harvard epidemiology and nutrition professor Walter Willett told Time in 2016. One nonprofit, the Physicians Committee for Responsible Medicine, sued the USDA and HHS in 2016, claiming that lobbying from the American Egg Board and other industry pressure led to the exclusion of a specific, numerical guideline for cholesterol consumption in the 2015 DGAs.

This year’s guideline process has so far shown little evidence of industry tampering. Nutrition and food studies professor Marion Nestle wrote in a blog post that the advisory committee’s 835-page report was an “impressive, solid, conservative review of the existing science.” But there’s no telling what will happen as the USDA and HHS boil down the recommendations into the official 2020 DGAs. According to Nestle, this is a highly secretive process that is likely to be subject to intense lobbying from proponents of meat, saturated fat, and low-carb diets.

Springmann calls for reforming national and global health guidelines so that they’re shielded from industry interests and don’t silo health and environmental concerns into separate buckets. After all, climate change poses public health dangers of its own. Rising temperatures have already begun to bump up the rate of mortality from conditions like heart disease, and increasing concentrations of ground-level ozone can cause potentially fatal diseases like emphysema. Efforts to mitigate climate change will automatically help to address these threats to public health.

Meeting the world’s health and environmental goals will not be easy, and Springmann thinks it’s a big mistake to eschew a multidisciplinary approach. “Siloing prevents real change,” he said, arguing that governments must update their dietary guidelines to reflect the scientific consensus on health and sustainability. If they do so, Springmann added, “there is a tremendous opportunity to move closer to attaining those global health and environmental targets, which reflect serious issues that we all face.”