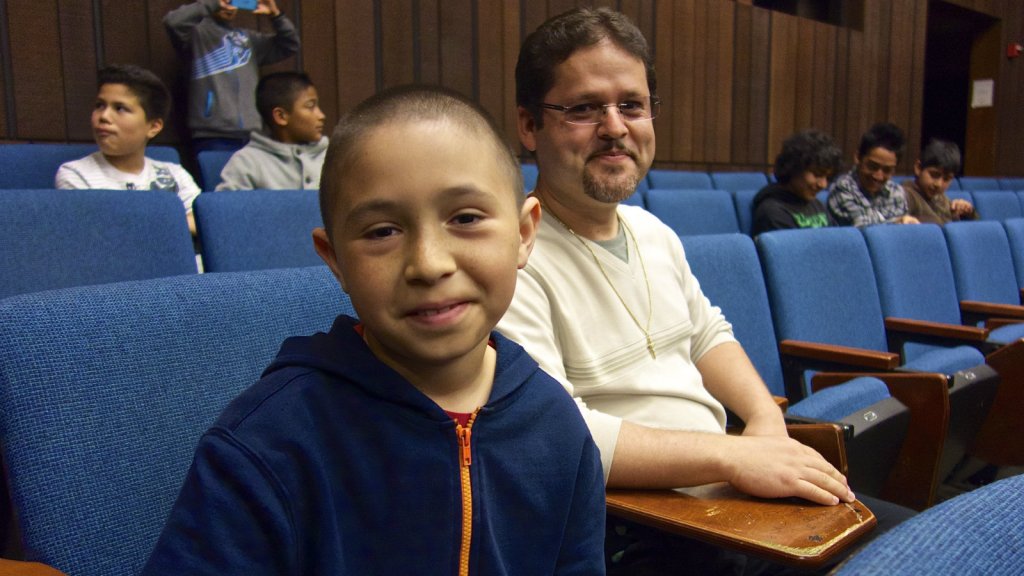 José with his teacher Oscar Ramos on a tour of UC Berkeley. Jackie Mow
Food

Every American who eats lettuce is responsible for José Ansaldo. He’s the 8-year-old protagonist of the new documentary East of Salinas. He’s a slight kid with an easy smile. He gets good grades, even though his family’s frequent moves force him to keep changing schools — three times one year. He especially likes math. He has a brother and sister who were born in the U.S., but he — like his mother and stepfather — was not.

His parents work in the fields. Despite his age, José has also done this work a few times. They cut lettuce in the Salinas Valley, America’s salad bowl. If you eat lettuce in the U.S. there’s a good chance that it came from California, which means you are creating the economic conditions that set the parameters of José’s life. Under the circumstances, it might be worth your time to see what that life is like.

The documentary, directed by Laura Pacheco and Jackie Mow, simply follows José’s family as he progresses from third to fifth grade. It premieres on Independent Lens on Monday, Dec. 28, on PBS (check local listings).

The Republican primary campaigns and the plight of Syrian refugees have forced public attention onto immigration issues. When pundits and politicians address these, they talk about the abstract concept of immigration — the term we use when people who do (or don’t) possess an abstraction (citizenship) move across an abstract invisible line. These abstractions breed others: People spar with theories and statistics, but the debate rarely comes down to earth. We rarely meet the people we are talking about.

That’s why a documentary like East of Salinas is valuable. It takes a pass on the wonkery and social science and simply lets us see what life is like for a family supported by farm labor.

That life looks tough. José gets up at 3 a.m. to go to a babysitter’s house so that his mother can start work. He sleeps there until 6 a.m., when he wakes up to get ready for school. In the off-season, his mother can stay home (his stepfather travels to Yuma, Ariz., where there is work). But this is worse, because there is no money, and sometimes no food other than what he gets at school. The family keeps moving: when the rent rises, when the children witness a shooting nearby, or when vermin overrun an apartment.

There’s little time or money for exploration in this life. At one point, José tells the camera that he is looking forward to fourth grade because he’s heard there’s a field trip where the kids get to go swimming.

“Have you ever been swimming?” asks his interviewer.

José shakes his head no.

“Do you know you live really close to the beach?”

It’s a tough life, but no one complains. “I’ve been working in the fields 10 years. I don’t mind it,” says José’s stepfather. “What else can I do? It’s hard work, but I do it well.”

We don’t see José whining, either. Instead, he says he wants to do whatever he can to help his family. At the beginning, he says he wants to be a firefighter or a cop. Then — after spending a year in the class of an extraordinary teacher, a son of farmworkers who managed to graduate from UC Berkeley and become a U.S. citizen — he changes his mind and says he might like to be a teacher. At the end of the film, he says he’d like to be an engineer, so he can employ his love of math.

You can see José’s eyes light up when his teacher takes him to Berkeley for a tour of campus, but the odds are stacked against him. Even the team of four immigrant kids who triumphed over well-funded suburban schools to win a NASA robotics contest — whose story got turned into the Hollywood movie Spare Parts — have struggled. When Joshua Davis, the journalist who wrote their story, checked in on how these kids were doing after the movie came out, he found that two members of the team were working low-skilled jobs, one was unemployed, and just one had graduated from college … before he was deported.

That’s the challenge José faces. But I got the sense that he would willingly follow his parents to the lettuce field if that was necessary to help his family.

As a young environmentalist, I started out thinking that the goals of saving humanity and saving nature were fundamentally opposed. But the more I study the dynamics of food, population, and ecology, the more I am convinced that they are actually aligned. A person will always cut down a tree, or set fire to a plot of forest, if that’s what must be done to feed the family. Taking care of our human family is a necessary precondition to maintaining a viable biosphere. The debates over what we can pragmatically do to help the people with the least power in our society will continue forever; I don’t expect this documentary to resolve any fights. But it is a welcome glimpse of a ground truth amid the rhetoric.