It may be coming to a bakery near you: bread made from wheat that has had its photosynthetic mechanism refashioned to help it flourish on a warmer planet.

Despite the fact a number of researchers — some funded by the Bill and Melinda Gates Foundation — are scrambling to create this new breed of wheat, it won’t be arriving any time soon. Increasing temperatures are already taking a toll on the world’s wheat fields. But a new heat-resistant wheat that will replace the types currently grown is a decade or more off in the future.

“The largest single global change that threatens food security is high temperature,” said Donald Ort, a professor of plant biology and crop sciences at the University of Illinois who is working on a project called RIPE — Realizing Increased Photosynthetic Efficiency — to enhance photosynthesis in food crops, which would also help beat the heat.

The problem is being seen throughout the world. In 2010 and 2012, for example, Russian wheat growers saw their yields decline dramatically because of a combination of hot weather and drought.

“It caused 30 percent reduction in national production, which is really huge,” said Senthold Asseng, a researcher at the University of Florida. Russians made up for the shortfall by reducing exports, he noted, but “if you lose a third of your production in India or Bangladesh, that could be a huge disaster.”

There is a concerted global effort to help agriculture adapt to the new climate reality as warming continues apace. The most urgent adaptation initiatives, experts say, involve the world’s main food crops — especially wheat, rice, corn, and soybeans, which together provide two-thirds of human caloric intake. In a study released last year, the Intergovernmental Panel on Climate Change (IPCC) warned that without fundamental changes in agriculture, the world risks increasing food insecurity.

It’s not just about food. Food shortages are an important driver of social problems. For example, a drought from 2007 until 2010 is considered one of the main factors leading to the civil war in Syria.

A 2017 study by a group of researchers that included Asseng used models to forecast changes to these main crops under warmer temperatures. The study showed that each centigrade degree rise of temperature would cause a drop in production of all of the crops, led by a plummeting yield in corn of more than 7 percent, wheat of 6 percent, and a drop in soybeans of 3 percent, and rice 3.2 percent. “That means in the next 30 or 40 years, if global temperature rises 3 degrees Celsius we’re talking about 15 to 20 percent loss of wheat yield just from temperature alone,” Asseng said.

Climate change brings more than just higher temperatures. A whole suite of problems and benefits come with warmer weather, from too much to too little precipitation (there’s 7 percent more moisture in the atmosphere for every 1 degree C of warming); changes in the timing of precipitation, floods, and erosion; abrupt temperature swings; changes in soil health; and more wildfires, which can affect planting, ripening, and harvesting. Warmer temperatures may also mean more pests, more diseases, and more weeds. And along with the loss of yield, some studies show that important food crops, such as rice and wheat, have reduced levels of protein, iron, and zinc as they grow in a more carbon-rich environment.

All this comes at the same time the demand for food is rising and may increase by 100 percent by 2050 as the global population soars from 7.6 billion to nearly 10 billion. And as the world shifts from fossil fuels to plant-based materials, such as biofuels or bioplastics, experts say it will require a 30 percent increase in agricultural production. All of this increase will have to be done on agricultural land already in existence so that the Amazon rainforest or other important natural areas won’t need to be destroyed.

Wheat — the largest food crop on the planet, supplying 20 percent of global calories — is getting a lot of the attention from researchers. One of the leading approaches to increasing yield and creating a heat-tolerant wheat is in the optimization of photosynthesis. “Agricultural crops now convert a surprisingly low percentage of sunlight into plant biomass, some 0.5 to 1 percent,” said Martin Parry, a leading researcher at Lancaster University in England. “Doubling the percentage to 1 to 2 percent is all we need, and this has already been scientifically proven to be possible.”

Researchers are doing this by focusing on something called Rubisco — an acronym for Ribulose-1,5-bisphosphate carboxylase/oxygenase. It’s an ancient enzyme, more than 3.5 billion years old, that evolved with plants. It takes inorganic carbon dioxide and turns it into organic carbon.

But 20 percent of the time, Rubisco grabs oxygen instead of CO2, which leads to a process called photorespiration, which is energetically expensive for the plant and leads to less photosynthesis and smaller yields.

Ort calls Rubisco the most important enzyme on the planet because it is responsible for converting sunlight into plant tissue, which feeds the world. However, Ort says, “it’s not a very good enzyme. It’s slow. And it makes mistakes. It’s the most abundant enzyme on the planet, and the reason is the way the plants cope with its not being a very good enzyme is to make a lot of it.” 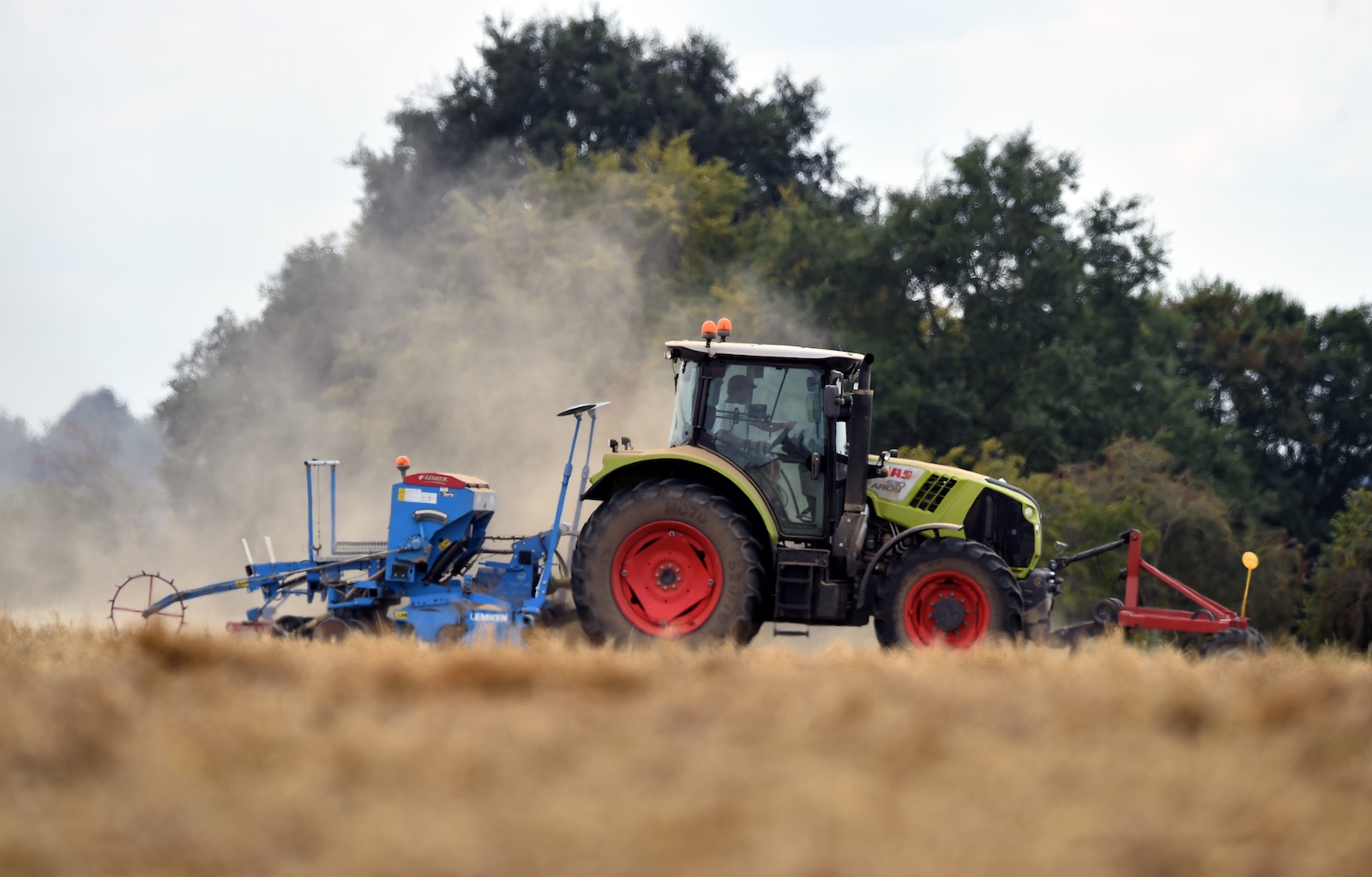 What the University of Illinois’s RIPE program and Lancaster University and other labs are focusing on is hacking into the plants to boost the efficiency of Rubisco. “There are more simple ways to do it,” says Ort. “These are complete redesigns to try to bypass the native pathways and replace them with a simpler, more efficient pathway” that doesn’t impinge on photosynthesis.

Even with the focus on redesign for photosynthesis, experts say a new cultivar of wheat is at least 10 or 12 years away.

At least one type of wheat that thrives in high temperatures has been grown successfully. Researchers from the Swedish University of Agricultural Sciences and the International Center for Agricultural Research in the Dry Areas created a wheat crop from ancient and modern strains that can grow in temperatures above 100 degrees F. It’s being grown in the Senegal River Basin in West Africa.

Rice, soybeans, and other crops would also benefit from a new, redesigned photosynthetic process. Rice, which is a food source for 3.5 billion people globally, is especially vulnerable. Not only is its yield hurt by higher temperatures, but it also needs a dependable supply of water — it uses 34 to 43 percent of the world’s water supplies for irrigation — and the effects of high temperatures are compounded by irregular weather patterns and the decline in aquifers. Saltwater intrusion as oceans rise is also a serious problem.

A recent study in the journal Nature found that a warming climate is increasing the level of arsenic in rice, which by 2100 could reduce yields by nearly 40 percent.

There are efforts on a number of fronts to prepare rice for the climate emergency, including developing types that are drought, disease and saltwater resistant. The IR8 variety of rice, for example, which was integral to the Green Revolution in the 1960s, is being phased out in places in favor of native cultivars that are easier on the soil and more disease-resistant.

And a team of U.S. researchers are editing the genome of rice in tests to add disease resistance or edit out genes that make the plant susceptible. They look for a plant that might have poor yield but has good disease resistance and then remove the resistant genes and place them in a high-yielding commercial variety. “Genome editing allows us to do that with speed and accuracy,” Adam Bogdanove, a professor of plant pathology at Cornell University, said.

Researchers in Arkansas, where much of the U.S. rice crop is grown, have found that over the last four decades nighttime temperatures have increased by 5 degrees F, which means plants lose more water at night. The increasing heat also reduces photosynthesis and hampers the ability of rice to self-pollinate. Some farmers are talking about moving further north to stay within the crop’s temperature range.

There are other approaches to making agriculture more tolerant in the face of hot temperatures, such as changing the timing of crops or employing agricultural methods that can help crops stay cooler. A recent study in Nature, for example, found that farms in tropical regions that diversify with a mixture of interwoven crops and a border of native forest, instead of a monoculture, help keep the agricultural landscape cooler while also providing more habitat that fosters biodiversity, especially birds.

In addition to crops, livestock and other animals raised for food are also being affected by climate change. Chickens, for example, are especially susceptible to heat.

One of the more intriguing solutions is the Naked Neck chicken. It’s an odd-looking bird that appears as if its feathers have been plucked from the bottom of its neck up to its head. What it lacks in beauty, though, it makes up for in function in a changing climate.

These chickens, originally from Romania, are not only naturally air conditioned because of the lack of feathers, they have bigger lungs than other birds and other important physiological traits that allow them to adapt to warmer temperatures. “It’s leggier too,” said Matthew Wadiak, founder of Cooks Venture, which is pasture-raising and selling these birds in Arkansas. “If you have a leggy bird that is upright and off the ground it has more airflow around it and it can stay cooler.”

Ranchers and scientists are also looking for cows that can thrive in warmer temperatures. A breed of animal that may help ranchers in the U.S. Southwest and other arid regions adapt is the raramuri criollo cow — which means “light footed ones” — as a replacement for Angus and Hereford, which have more impact on landscapes.

Drought has plagued the Southwest in recent years and some researchers say it may be a permanent fixture in the region. It has taken a heavy toll on ranching. The criollo were brought to North America from Spain by conquistadors and turned loose, before being adopted by, among others, the Tarahumara Indians. Over the last four centuries these cattle have adapted to arid conditions in Mexico.

Two decades ago, they were brought from the Mexican state of Chihuahua to the Jornada Experimental Station near Las Cruces, New Mexico. They have since been adopted by ranchers who have seen benefits, and the Nature Conservancy is studying their impact on the land at its Canyonlands Research Center in Utah.

“These cattle can withstand heat and lack of water,” said Nichole Barger, an arid land ecologist at the University of Colorado Boulder who consults at the Canyonlands Research Center. “They are selecting a broader range of different kinds of plants, not just those grasses that are in decline because of climate change.”

The most important solution to food security over the long term, of course, is reducing greenhouse gas emissions. There is “no possibility for anybody to say, ‘Oh, climate change is happening, and we will just adapt to it,’” said Hans Otto Portner, co-chair of the IPCC working group on food and land use. “The capacity to adapt is limited.”