So much deliciousness depends on microbes. Beer, wine, and bread, of course, require yeast, but that’s just the beginning: The best pickles, chocolate, sausage, cheese, and coffee all get their flavor from bacteria. These foods rely on fermentation — which is a polite way of saying that germs eat your food before you do, and poop out reconfigured molecules that taste really good.

Most people have heard about this process for foods like yogurt and pickles, but the other foods may come as a surprise. Meats ferment as they age — think of hanging chains of sausages, or dry-cured steak. After workers pick coffee bean and cocoa pods, they lay them out to ferment. Letting the microbes feast on the harvest makes it easier to separate the part we want — the seeds — from the pulp, and it also adds flavor.

As you might guess, we figured all this out by accident. The ancients saw that, instead of going bad, food could go good under certain conditions, and they figured out how to replicate those conditions. Nowadays, we conduct fermentation either by zeroing in on one or two specific microbes (for beer, wine, and bread we rely on the yeast species Saccharomyces cerevisiae), or throwing open the doors to whatever happens to drift in with the breeze (as with coffee, chocolate, and alembic). Essentially, we’ve limited ourselves to either rolling the microbial dice or using the same time-tested strain each time. We’ve been in the dark at the microbial level. Now we have the opportunity to domesticate bacteria that produce just the substances we want. 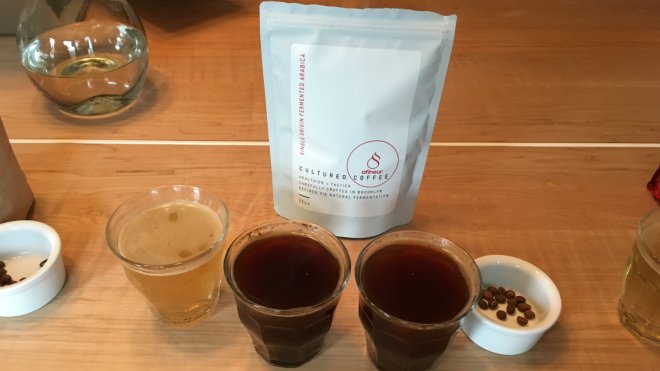 In the last 20 years, the technologies for detecting DNA and identifying exactly what chemicals exist in a tiny sample of food (or anything) have gotten exponentially better and cheaper. That progress allows us to do something crazy: We can now pick exactly the right microbes to forge new flavors and new foods. That’s what the company Afineur is doing. We profiled its co-founder Camille Delebecque in our Grist 50, and when it offered up bespoke fermented coffee through Kickstarter last year, I was curious enough to buy some.

When the coffee arrived, I invited some discerning friends over to taste it. I may be a food writer, but I’m not any sort of super taster. I needed backup. Frieda Hoffman and Katy Wafle, who opened a much-loved coffee shop here in Berkeley (which they later sold to these guys), brewed the Afineur coffee, along with three other types for comparison. Also joining us were wild food guy Philip Stark and my editor (and longtime cooking enthusiast) Scott Rosenberg. 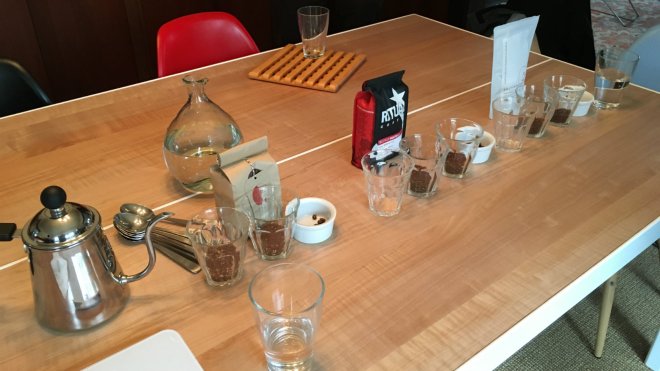 We bent over the cups, lifted spoonfuls of coffee to our lips, and slurped it up noisily. I tried to focus all my powers of perception on the moment. My mouth filled with the flavor: malt balls, milk chocolate, and mostly (of course) coffee. It was good, but not some utterly new, blow-the-hair-off-your-scalp experience. I moved on to the other coffees; they were good, too.

When we compared notes, it seemed that everyone had had a similar experience. This cultured coffee was very good, right up there with other great roasts, but not ahead of them in any significant way.

“It’s definitely my favorite of the three,” said Scott.

“Of these, it’s actually the most boring flavor, but I like the mouth-feel best,” Katy said.

“Yeah, this is really round and soft feeling,” said Frieda.

Afineur designed the coffee to replicate the taste of civet beans — that’s the coffee that gets extra special fermentation while passing through the digestive system of a jungle cat. Workers used to gather those coffee beans out of wild civet poop, but these days they simply keep the cats in cages to streamline the process. Afineur was billing this as a more sustainable, cruelty-free version of civet coffee. Philip, who had tasted civet coffee, said he detected some of the same swampy complexity in this brew, but also thought we’d waited too long since the roast date. I probably should have brewed it a week earlier if I wanted to catch the peak flavor.

The coffee, we agreed, was good. But essentially it was an even more expensive version of expensive coffee. That is, Afineur has done some fancy footwork to replicate something that can be done more cheaply with traditional methods. That’s fine for a Kickstarter proof of concept. To really prove the value of controlled fermentation, you’d need to take it to the next level by producing some taste or food that we simply can’t get any other way. And that’s what Afineur hopes to do. In his Grist 50 profile, Delebecque said the company would begin working on other custom-fermented foods.

“How are we going to be able to feed 10 billion people by 2050? The best answer is probably to have as many people as possible switch to a plant-based diet,” he says. Delebecque says that through fermentation, we could increase the amount of available protein in plants by up to 20 percent, making them a more formidable meat substitute.

Perhaps next they will figure out how to get microbes to transform corn into something that tastes like steak, turn algae into salmon, or bring us new flavors that we have yet to dream of.