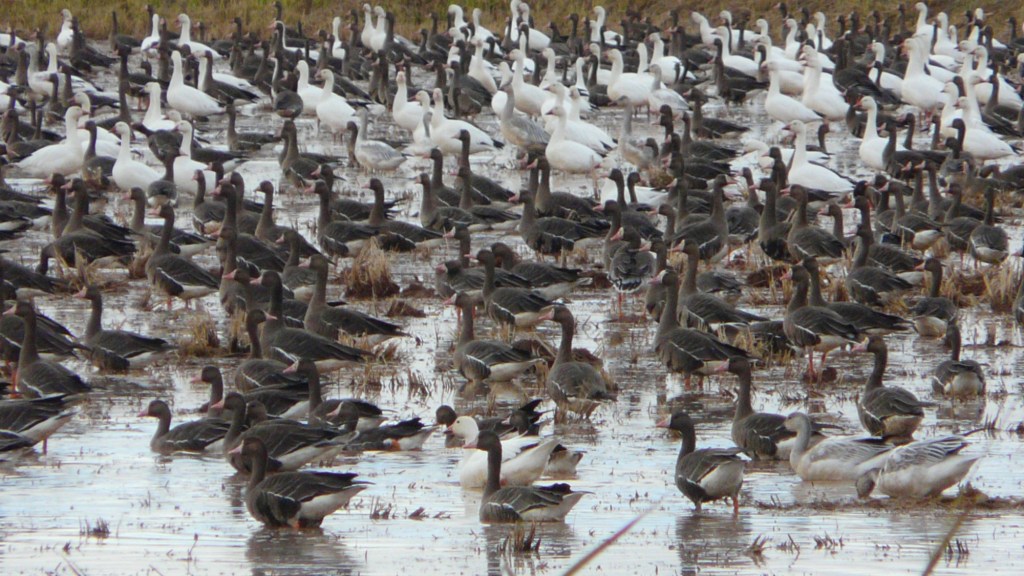 Water is in dangerously short supply in California, and most of the state’s wetlands have disappeared. So where are all those migratory birds traveling the congested Pacific Flyway supposed to stop for a rest and a feed?

Rice farms are sometimes criticized for using a lot of water. But much of that water is released back into rivers and streams after the growing season. And it is the temporary layer of funky water that makes these fields, found the world over, potential habitat for wildlife.

Experiments led by University of California at Davis researchers have found that salmon fry raised in inundated rice fields grow faster and stronger than their cousins maturing in faster-flowing rivers. The muddy fields also resemble wetlands where birds naturally congregate.

The Nature Conservancy is taking advantage of the wildlife-nurturing potential of rice paddies, partnering with growers to provide “pop-up” habitat for migratory birds. Here’s KQED’s Quest with the details:

Winter is always a busy bird season at Douglas Thomas’s rice farm in Olivehurst, California, about 40 miles north of Sacramento. …

The birds come here because Thomas keeps his rice fields flooded in December and January. The water decomposes the rice straw leftover from last year’s harvest.

Normally, at the end of January, “we would let our water go and start trying to dry our fields out because the lake that’s in front of us has to be dry enough to drive a tractor in it and then we’ve got to seed it,” he says.

But not this year. Thomas is leaving water on his fields a little longer as part of an experimental project with The Nature Conservancy, designed to provide extra habitat for the birds when they need it most. …

The group is paying farmers to create about 10,000 acres of these temporary wetlands in February and March. The bidding process is secret, but bids came in both above and below $45 per acre, the payments some farmers get from federal conservation programs.

The approach is particularly valuable in California’s Central Valley. About 95 percent of wetland habitat has been lost during the past two centuries in the once wildlife-rich landscape, replaced by earthen levees constructed alongside rivers to protect farms and homes from natural flooding.