By 8 a.m. most days, brothers Adam and Don Collins are piloting a truck full of unwanted food through the outlying cities of the Boston metropolitan area. They make stops in Cambridge, Somerville, and Malden. They pick up crates of fruits, vegetables, baskets of bread and frozen pies, and large plastic ziploc bags full of colorful frozen cafeteria food. At times, Adam and Don drive far out of the city to pick up fresh fruits and vegetables from farms.

“I have a home for everything I put on this truck,” Adam Collins told me on a recent morning, as he tossed some milk on board outside of a Whole Foods. “Everything will have a home.”

The organization that Adam and Don work for, Food for Free, is one of a few in Boston seeking to solve two of America’s major problems at once: We have a lot of unwanted food that goes to waste, and a lot of people who go hungry. The challenge is to cancel out both problems by connecting them. And, as I wrote in my last piece, that turns out to be harder than you might think.

Over the course of the year, Food for Free saves enough food from the landfill to provide meals to over 25,000 people in the Greater Boston area, some of whom might get just one meal through the organization’s efforts, and some of whom rely on it daily. Food for Free trucks stop at such diverse locations as Harvard University, Chipotle, Whole Foods, and the docks in Chelsea (where fruit arrives on its journey to Boston supermarkets), before moving on to a series of food pantries and soup kitchens around the city.

On the day I joined them, Adam and Don’s first drop-off was the Elizabeth Peabody House, a food pantry in Somerville. The number of people seeking the kind of fresh produce that the brothers deliver is up, says Food Pantry Coordinator Ariela Knight. It’s the summer, and food-insecure families are looking to provide an extra meal to children who, for most of the year, eat at school. We were also drawing close to the end of August — families often tend to come in at the end of the month, after their SNAP funds (food stamps) have run out. While staples like canned vegetables and rice come to the Elizabeth Peabody House from the Greater Boston Food Bank, food rescue operations like Food for Free provide the bulk of the pantry’s fresh produce. 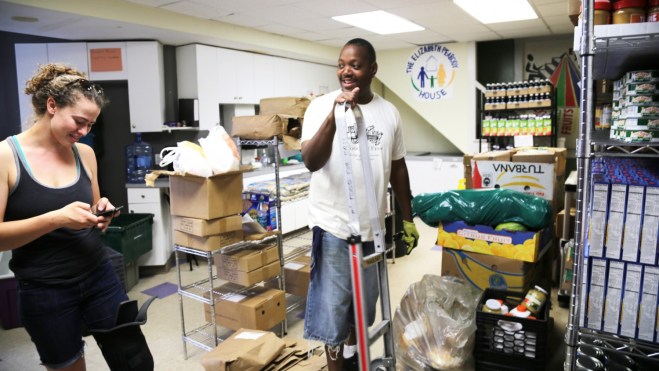 But while Food for Free has substantial reach, many in the area don’t know about the service the organization provides. Food for Free faces two “equally big hurdles” in setting up donation programs, says Sasha Purpura, the organization’s director. Companies with food to donate either “don’t think it’s viable” — they’re concerned about logistics or liability — “or they don’t know we exist.”

That could be changing. Last October, following similar laws in Vermont and Connecticut, the Massachusetts Department of Environmental Protection implemented a ban preventing businesses from throwing away more than one ton of commercial organic waste — so, unwanted food — per week. (Rhode Island has also enacted a ban, which will go into effect next year. Several cities have also put bans in place.) The ban, which was implemented as an environmental regulation and didn’t need to pass through the state legislature, was widely supported. It’s “very rare for an environmental regulation to have no opposition,” Department of Environmental Protection Commissioner Dave Cash told NPR at the time. “And this has had no opposition.”

Large, for-profit kitchens now have to find another way to get rid of the food they don’t use, either by repurposing it, composting it, or donating it to people who want to eat it.

This law seems like it should be a fantastic opportunity for food rescue operations like Food for Free. But it might not work out that way. “I think the one weakness is the laws don’t really incentivize you donating the food as opposed to, say, composting it or sending it to the anaerobic digester,” says Emily Broad Leib, an assistant professor of law at Harvard who directs the university’s Food Law and Policy Clinic. While composting food is a better option than throwing it out, it too has a significant carbon footprint.

“There’s a large composting infrastructure. People know what composting is. So, all of these organizations, as they try to respond to this waste ban, can simply start composting their food. And our concern is that’s what is going to happen,” agrees Purpura. “I think that’s certainly better than landfills without a doubt, but as far as it’s edible food, I would much rather see it go to people.” 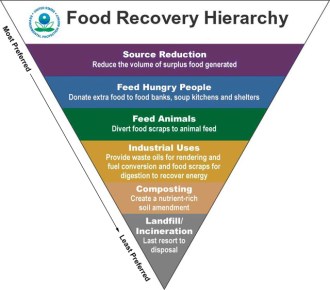 Fortunately for groups like Food for Free, in addition to the tax breaks that some corporations can collect from donating, there’s an additional cost incentive for Massachusetts businesses that donate instead of composting. Harvard University (which, as a nonprofit, can’t claim federal donation tax benefits) provides an example: Since last September, the university’s kitchens have been packaging their leftovers  for Food for Free to pick up; Food for Free, in turn, delivers that prepared food to homeless shelters and soup kitchen-type operations around the city. Because the university was already paying to have its compost hauled away, and because Food for Free doesn’t charge the university anything, the donation program actually helps Harvard save money.

“Part of why we like Food for Free so much is, you can imagine that if you had to package it up and then figure out how to get it out to places, that would be a huge time commitment,” says Meredith Weenick, Harvard’s vice president of campus services. Food for Free figured out most of the logistics — and does most of the work — for Harvard. For the university’s workers, there’s only a “marginal time difference” between composting leftover cafeteria food and freezing it for donation.

That food then makes a big difference for hungry Bostonians. Some of it, for example, goes to Bread of Life, a mostly volunteer operation in Malden that brings hot meals to homeless people who the city houses in hotels to supplement its overflowing shelters. For a while, Bread of Life had money through grants and the Obama administration’s stimulus package to buy food and pay a small staff. When that money dried up, Food for Free’s Harvard meals kept the program going, says Gabriella Snyder Stelmack, special projects coordinator for the organization. Bread of Life doesn’t have to have a full cooking staff, or buy food; instead, they just repackage Harvard’s cafeteria food into meals.

Lets recap. Why should organizations donate? There’s the tax credit. There’s the feel-good benefit Purpura describes. And, in a handful of states, there’s a food-waste ban pushing donations.

So why doesn’t everyone do it?

It may be up to us, the consumers, to make a difference. “Just like people now go ‘Where do you source your food?’ they should ask ‘What do you do with your leftovers?’” says Purpura.

“And I think one of the things we really need to do is to change that calculation in their minds. We need to change it from there being no risk if I throw this food away — make it, consumers aren’t going to shop at your location anymore because consumers care about how you’re supporting our food supply and what you’re doing with your food waste.

“I think that’s the problem. There’s literally no repercussion for wasting the food. We’re not spurring people to action.”

I’m off the water grid, so do I still need to take short showers?